The Harvest at LCT3 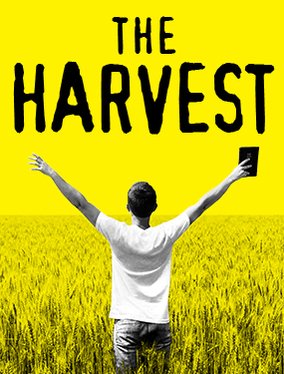 The Harvest at LCT3: An Unsatisfactory Crop

This is a complicated one to write about without giving anything away, and not judging the merits of the play based on the plot. Samuel D. Hunter has written a dense story about a group of young born-agains on the days leading up to a modern day crusade to the Middle East to convert Muslims to Christianity.

The Harvest begins with a long, drawn-out uncomfortable scene of these young people praying; speaking in tongues and flinging themselves around as if possessed. The play ends with the same image, but we are much more informed by that point. In that final scene, the audience has more clarity in what praying in tongues means to the characters, and it’s a very different vantage point.

The Harvest is a complex story about one of those youths, Josh, convincingly played by Peter Mark Kendall. He is tormented by his situation and life in this small town, struggling with the death of his alcoholic father, the return of the older sister who escaped the family drama, and his own personal relationships within the church. He is desperate for a sign from God that his trip is the right thing to do, and not the escapist route that his sister, Michaela (realistically portrayed by Leah Karpel) did years earlier. She ran away from her father in order to survive, and consequentially abandoned her younger brother, leaving him to find his own way. Now she has returned to try to talk him out of his missionary trip, but maybe it’s a bit too late. When Michaela left and his father drank himself to death, he turned to the church run by Pastor Chuck (a very believable Scott Jaeck) in his moment of despair and let the church consume and comfort him.

Although scenes tend to feel drawn out and a bit unfocused, the play, directed by Davis McCallum, is compelling and engaging for the most part. We become slowly more and more concerned for Josh and his good friend, Tom (a heartfelt and perplexing portrayal by Gideon Glick). The leader of the group, a big grinning Ada, (a compelling but disconcerting Zoe Winters) does a great job in showing us the true order of the church, and what’s at stake. The “you’re a smart guy” scene is quite powerful, and leaves me still questioning the meaning of the final moment.

The other couple preparing to also go on this mission trip is beautifully crafted by Madeline Martin (Denise) and Christopher Sears (Marcus), but they don’t seem to be fully fleshed out, or at least, their purpose in driving forward the plot remains a bit of a mystery. Denise is the most complex character because she is a believer while also remaining rational and individualistic; confusing us with her blatant questioning of faith and function. The entire story plays out in the church’s basement, a perfectly crafted space for this kind of preaching to be seen and deciphered under the harsh lights (Sets- Dane Laffrey; Costumes- Jessica Pabst; Lighting- Eric Southern) and dismal decor. 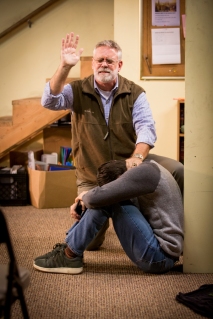 But in the end, are we to join with Josh and see and hear what he needs to experience to move forward? Become complicit in his decision? Is he creating his own false narrative like Ada did to make life easier for himself? What happens on that final morning before they leave is unclear (I’m purposely being vague here so as to not ruin the ending).  All we can guess is that the inspirational stories we hear are not so straightforward. The Pastor’s story that glorifies his wife feels a bit too similar to Ada’s inspirational one. So what is Hunter trying to tell us?  I’ll let you decide, but I can’t say that I left the theatre content or hopeful. More like a bit sick to my stomach. But I’m guessing that is the desired effect Hunter is going for.