Sweat: Q & A with an Actor Giving a Review 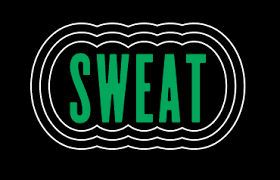 Sweat: Q & A with an Actor Giving a Review
By Ross and friend

Sadly, I wasn’t able to get in to see Sweat at the Public Theater this past week, and I’m unsure if and when I will get a chance. So, I harassed an actor friend of mine who was fortunate enough to see it, and forced him to tell me what he thought. Here are some excerpts of that Q&A:

Q: How’s the review coming along?
A: …..you weren’t serious were you?
Q: very serious
A: I have no idea how to start…
Q: What would you say to me if I asked you about Sweat? 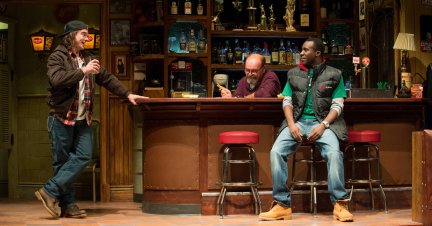 A: I really liked it, it was real and honest, the set was beautiful (set: John Lee Beatty; lighting: Peter Kaczorowski; costumes: Jennifer Moeller) primarily taking place in a bar. From the moment it starts, you’re immediately drawn in.  It’s heartwarming and funny.  It’s about race, class, family and friendship.  It engages because you learn something that happened eight years ago that changed the lives of all these people, but you don’t know exactly what yet.
Q: Tell me a little about these people. 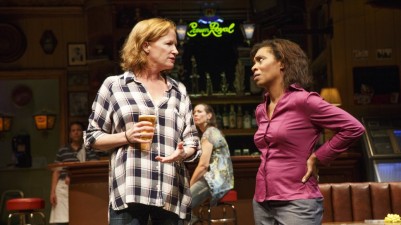 A: So Chris (Khris Davis), Jason (Will Pullen), Tracey (Johanna Day), Jessie (Miriam Shor), and Cynthia (Michelle Wilson) all work at a factory in their town.  They all share drinks, laughs, and good times in a bar along side the manager, Stan (James Colby) and Oscar (Carlos Albán), the Columbian busboy. Cynthia, Jessie, and Tracey are the best of friends having worked together at the factory for 22 years.
Q: Sounds like a good set up. Who are the two others?
A: Chris is Cynthia son; both black. He seems to be the one with the most promising future. He has plans to go to college in September and become a teacher. He hopes to work at the factory over time to pay for tuition.
Jason is Tracey’s son and Chris’s best friend. His life plan is more straight forward; to work at the factory until he’s 50, retire, and then own a Dublin Donut Shop.
Q: What happens to these people?
A: In the second scene of the play, we learn that a management position has opened up and the factory owners plan to promote someone from the floor. Cynthia puts her name in the running for the position and so does Tracey. She feels that if Cynthia can do it so can she.
Q: That sounds like some trouble brewing.
A: Cynthia gets the job, which not surprisingly causes strife in their relationship. Tracey believes Cynthia only got it because she’s black. 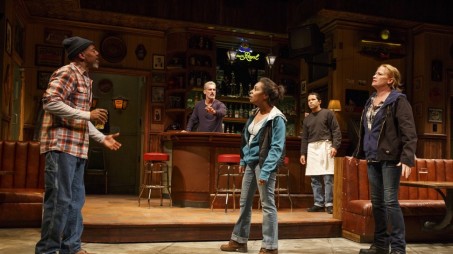 True conflict begins when the factory they all rely on decides to make cutbacks, layoffs, and move some of the work to Mexico. The workers strike and in response, the factory lock their doors leaving all of them unemployed and in trouble.
Q: Sounds very topical. Very Election Day relevant.
A: Very. The play begins to explore race and strike line jumping. Oscar, the Latino busboy they all know from the bar, takes a job at the factory at a fraction of the pay, leaving the striking workers in a terrible powerless position. The owners are playing hardball, forcing the old employees to work more for less. Racial tension arise and trust falls away between friends, especially when Tracey instigates her son, Jason to act against those who “stole” their livelihoods. Chris reluctantly gets involved and the result is just plain heartbreaking.
Q: Don’t tell me anymore. Who is the character that most touched you?
A: Stan is my favorite character because he is the shining light in the play; the perfect clash of realist and optimist.
Tracey is one of the more complex characters. She is so ignorant and foolish in her beliefs. She calls Oscar a Puerto Rican simply because he’s Latino without any knowledge about who or what he is. She also states that he’s not from here, even though he was born in the same area. She calls Spanish ‘gibberish’ solely because she can’t read or understand the language. But, her portrayal is honest and real.
Q: Sounds powerful. Is there anything you didn’t like?
A: I pretty much liked everything about this production. The director, Kate Whoriskey (Ruined), the playwright, Lynn Nottage (Pulitzer Prize winner for Ruined), and the cast. All doing first class work here.
Q: Fantastic. Thanks. Now I’m jealous. And very sad I didn’t get to see it.