By Ross
I’ve never really thought about Uma Thurman with any particular strong opinion of her as an actress. I’ve enjoyed her in some of the films such as “Dangerous Liaisons“, “Gattaca“, the spectacular award-winning “Hysterical Blindness“, even the charming and very likable films, “My Super Ex-Girlfriend” and “The Truth About Cats and Dogs“.  She’s always good, or at least good enough in my eyes. I never did see the two-part Tarantino films, “Kill Bill“, that everyone raves about. I didn’t stay away because of anything in particular, but I am not the greatest fan of him, especially the way he as the director tends to parallel comedy with unneeded violence. I’ve been told (numerous times now) that I need to give those films a shot, and I guess I’m willing but with reluctance. With that in mind, I didn’t enter the Hudson Theater to see Beau Willimon’s new drama, The Parisian Woman with Uma at the forefront of my mind, nor with that same blasé attitude I have towards her as a performer, but I was filled with curiosity. 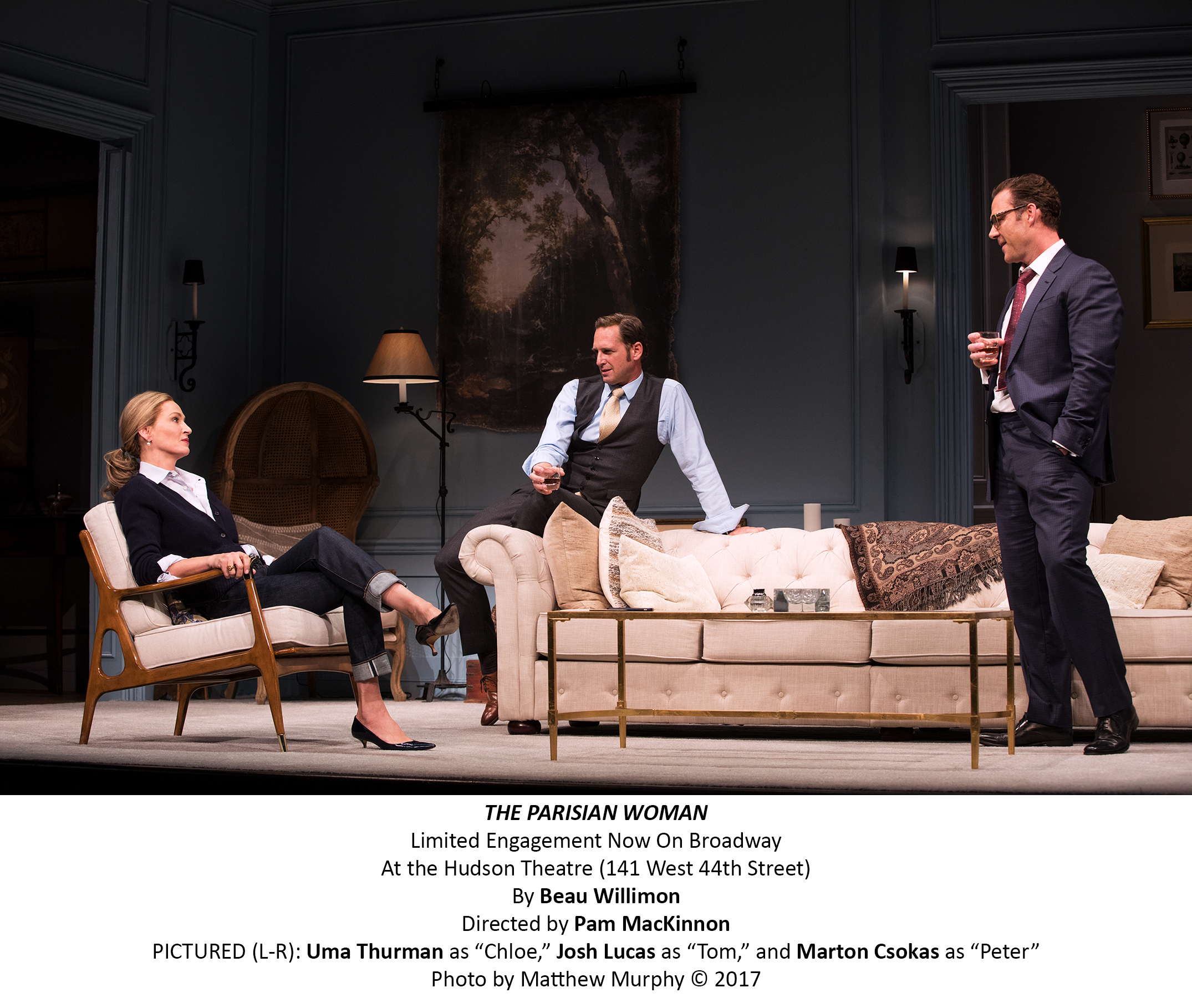 On the other hand, when it comes to the other actors; the fine and handsome Josh Lucas (“Sweet Home Alabama“), the gifted Phillipa Soo (Hamilton), and the extremely talented Blair Brown (Arcadia, ATC’s On the Shore of the Wide World), I carried a healthy level of excitement in seeing them live on stage. In The Parisian Woman, these fine actors make this all look so easy, fitting into their perfectly tailor-made roles in this surprising play about power, privilege, and manipulation in modern day Washington D.C. We watch and learn, as they each try to navigate the powerful and connected, playing their cards whenever they can. It’s surprising and thoroughly engaging, keeping us on our toes and leaning in.

The playwright, who, not surprisingly, is behind the dark and thrilling “House of Cards” and the politically charged play, Farragut North, has written a very current and complex play.  It constantly surprises with its smart and sassy dialogue that would slip so easily into his now cancelled D.C. television show.  The first scene between Thurman and the well-healed Peter, played to perfection by Marton Csokas (Goodman Theatre’s Uncle Vanya) sets up the dynamic with a light-hearted ease with brilliance stitched into every bit of word play. The Parisian Woman is best left to be discovered for its twists and turns though, because within those plot points is the play’s finest qualities. Much is said about the man occupying the White House right now, the ‘Orange Monster’ as I like to call him, although nothing that we haven’t heard before on CNN or between friends.  This is not a play that will give any relief from our present day political problems, or a distraction from the news cycles that seem to be on repeat every day. And because of that, it’s not always that much fun to watch. In an effort to address the current climate in the Nation’s capital with this current administration, Willimon gives us Republicans saying the things we liberals are imagining they are saying to one another (“Everyone needs to calm down, shut out the noise and keep their shoulders to the wheel. We’re going to keep the country moving forward. Everything’s okay. We can manage him.”), Democrats saying the things us liberals are saying constantly about this President (“You’re as thin-skinned as your buddy in the White House.”), and those opportunist others who have no affiliation except their allegiance to the dollar bill (“Good businessmen don’t vote. I didn’t want to have to look either of them in the eye and lie.”). To hear those lines is both enjoyable and disheartening all at the same time, as it reminds us of these troubled times and our precarious predicament without offering much relief, insight, or wisdom.

With Thurman as the woman at the center of this intrigue, she wears the part like a tailor made suit. She’s an elegant and cultured woman utilizing all that she has at her disposal to gain some level of influence in her surroundings. “I can’t control who falls in love with me“, she says, with full knowledge of her abilities and strengths. And she is good in the part, a tiny bit mannered I’d say, especially in comparison to the other naturals surrounding her on the stage, but for a Broadway debut by a film star, she does a fine and respectable job. The Parisian Woman, as directed by Pam MacKinnon (Amélie) is meticulously well cast and orchestrated throughout, lovingly staged on glorious sets by Derek McLane (The Price), with lighting by Peter Kaczorowski (Sweat), and elegant costuming by Jane Greenwood (The Little Foxes).

I’m not sure if I understand the need for those wordless character portraits used during the transitions between scenes, they felt oddly distancing and distracting. The wall of headlines that lower down are engaging enough to keep us tuned in to the maneuvering we see before us.  There is hope within the final denouement (for us liberals) but is it enough to warrant these ninety minutes? I wanted more, I must say.  More insight, maybe more hope for the future.  The play as it stands is compelling enough, and definitely entertaining, but won’t create an interesting dialogue for too long after the curtain goes down (so don’t plan a spirited post-theatre dinner debate). I can only imagine the actors quoting Blair Brown’s Republican character, Jeanette through-out the rehearsals, “We’re fine. Everything’s totally fine“, and wondering if they really believe it.