Good Grief Slides Into Place at the Vineyard 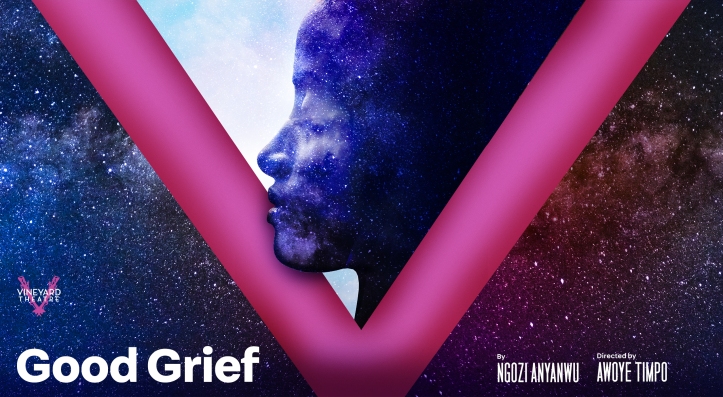 There’s a surprising depth to what first appeared as a fairly two-dimensional stage design by Jason Ardizzone-West (What Did You Expect?), but with a blinding white light shining into the dark, the geometrical sliding walls of memory and time refocus our mind’s eye to lean in and “just listen“. N or Nkechi, played with clarity and wisdom by the playwright herself, Ngozi Anyanwu (“Limitless“), is told by her hovering support system to get the story right, and not skip the best parts. She tries, wholeheartedly, to get the memories correct and in order, but as with all memories, they flit around back and forth from what we would like to remember and what actually happened back then. As the lead character, the playwright does the piece justice, with all her heart and soul, although one has to wonder what less connected actress could do with the lyrical beauty of the words and the collisions of time and space. The troubling parts fade and hide behind sliding doors of grey perforated metal, yet hang just out of reach teasing us to try to pull forward and understand. From echos inside her soul, she submits. With a muddled impulse, she explores, but bypasses the accidental moment in favor of remembering the man who, by all accounts, couldn’t be more gorgeous. And it’s true, he is, and with that knowledge and set-up, the story, as written by Anyanwu, pays strong tribute to the pain that exists when someone has simply gone away, giving her a space to look back, curl up, become immobile, and mourn, and in the end, from a higher level of understanding, to experience Good Grief and pathway through difficult sorrow.

As directed with a swiftness and secure spirit by Awoye Timpo (Anyanwu/ATC’s The Homecoming Queen), the boy in question, MJ, played by the devilishly handsome Ian Quinlan (“The Long Road Home“), rises out of her memory formulating into some sort of greek mythological god, shining in the night sky like a constellation. It’s hard to know what separates the myth from the man, but the connection and engagement ring true and touching. Perfectly portrayed, he’s the young man who walks down the neighborhood road with a sweet swagger of kind engagement and rebellious sparkle. He has the heart of an artist, making it hard not to like and almost impossible not to be swept up by the young man, given his dreamy lost boy’s stare and James Dean grin. But then in a flash, courtesy of lighting by Oona Curley (NLTP’s Breeders) and beautifully coordinated sound by Daniel Kluger (PH’s I Was Most Alive With You), the fracture is emblazoned across the stage, solidified by the nervousness of the next door neighbor delivering news she’d rather not, played with convincing concern by Lisa Ramirez (Berkeley Rep’s Angels in America), he vanishes from her life.

N is struck down, knocked from up above to a place of bereavement and confused sadness. The piece is high concept at moments, but also etched with authentic interactions in the quick entrances and exits of all, and even with the help and guidance of her compassionate Bro, played strongly by the very appealing Nnamdi Asomugha (Amazon’s “Crown Heights“), she struggles to find happiness and get back a grove in her glide. Patrice Johnson Chevannes (Broadway’s Racing Demon) plays her dynamic and complex mother, NeNe, and backed up by a deliciously delivered Papa, portrayed with precision and snap by Oberon K.A. Adjepong (TFANA’s A Winter’s Tale), they both try in their separate ways to understand the ambivalence and lethargy of the clearly devastated and heart-broken. They engage and harass, unsure what to do to bring her up into the stars once again. Costumed wisely and creatively by Andy Jean (Ars Nova’s Rags Parkland…), their coupledom is culturally defined and emotionally authentic, but it is in their worried glances that the true concern resonates, and the helplessness resides.

The storyline fluctuates from before to beyond, with wonderfully pure references to the birthing of love to the complications of desire, ending with destruction of purpose. It doesn’t always work perfectly, but the attempt is compelling and esthetically engaging. JD, the handsome and appealing boy from up the street, relaying a great blending of simple privilege and sweet popularity, steps in before and after, presenting an alternative escape to the stuck N. Perfectly inhabiting the part, Hunter Parrish (Broadway’s Godspell, “Weeds“) adds weight and texture to the overall mix of Good Grief, although the meaning of his presence and connection to the tragic hero is a bit forced. He represents the future, in some way, and in the moment of their attempt for engagement, they both hope to move beyond the incomprehensible feelings of loss and pain. The failure registers, caressing its way to somewhere touching and admirable. It feels so real, her struggle, and although her emergence, layered with mythology and symbolism, doesn’t ring entirely true, the overall effect works, even if the light of salvation doesn’t shine that bright.

“This was a play written because I missed someone and I missed myself when I was this young. I conjured him. I thought of him. Conjured my past and wrote the things I might have said or did had I a second chance to walk in this world.” That layering is beautifully crafted and stylistically poetic in Anyanwu’s profound and touching new play, Good Grief. She takes us on a journey from here to there and back, through the complex maze of memories filled to the brim with pain and loss of a young and beautiful man who held such love and devotion for a young lady in need.  It’s adventurous and jumbled, yet even when it doesn’t exactly shed light on the subject, we are reminded throughout that grief is convoluted and messy, but needed to find the good.