Does Her Joy Scare You? 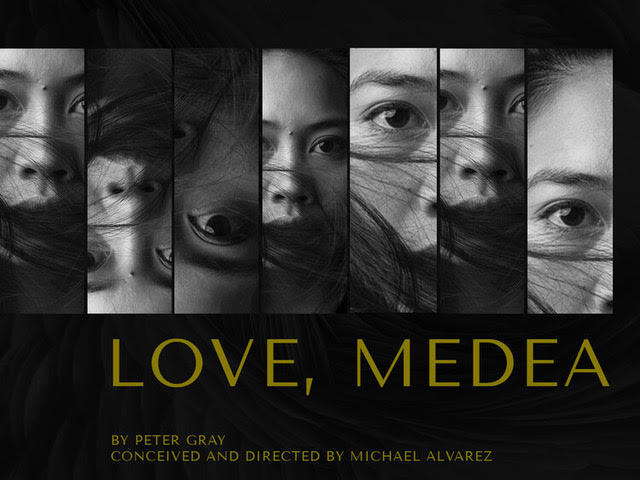 Director Michael Alvarez feels uncomfortable being boxed in. His newest project, LOVE, MEDEA, exemplifies a resistance to such a state, with the titular character resisting supposition and conjecture. With a resume that includes work on The West End, The Lincoln Center Director’s Lab and New York Theatre Workshop, Alvarez’s work toils to dodge those pesky labels that result in audience expectation.

Originally workshopped at New York Theatre Workshop, LOVE, MEDEA will have its official opening January 6th at Center at West Park in New York. The work hybridizes traditional theatrical modes, while incorporating music, dance, and couture fashion. Treading a sylphlike line between literalism and the avant garde, the new adaptation by Peter Gray aims to let audiences see a new, heartfelt and sometimes whimsical side of the infamous scorned heroine.

How did you conceive of this piece?

MICHAEL ALVAREZ: I’ve always been fascinated with the character of Medea. Especially since reading that in her source mythology, she didn’t kill her children. She wanted to save them. Since the Euripides text, she has been infamously known as that vengeful woman who killed her children. I knew I wanted to create a piece in which Medea has the opportunity to tell her side of the story.

What does the story of Medea mean to you?

MA: In terms of this text, at its core, it is about a woman learning to own her power and agency in a world that oppresses her. It’s a very personal story for me, drawing from women in my own family whose lives have contained this pattern.

Why did you feel the need for a new adaptation?

MA: I wouldn’t say this is an adaptation, but rather a theatrical exploration into previously unseen parts of Medea and her story. She is a woman who was driven, and destroyed, by her love. A woman who lived a life, not for herself, but for those she loved. And sacrificed her own happiness along the way.

What about Peter’s adaptation excites you?

MA: Everything! The language is exquisite. The depth of character and narrative is awe-inspiring. He captures the beating heart of Medea – her love, her fears, her demons and her pain.

LOVE, MEDEA incorporates theatre, dance, video and music. Why did you want this multimedia component for the show?

MA: The synthesis of all these disciplines dramaturgically ties into the telling of the Medea myth and her multifaceted identity. Her experience in the journey of the text isn’t tied to a single modality of experience. Various moments ask for various engagements of disciplines.

Where did you find choreographer Mara Driscoll and dancers?

MA: I’ve been collaborating with Mara on several projects and love her work! She dances at the Met Opera and asked some dancers she had worked with to join us.

How would you characterize the visuals (set, costumes, lighting, etc)?

MA: With a story and legacy of Medea’s size, the visual vocabulary of the piece needs to be as singular and epic as its title character. The visuals come out of the world of fashion and the visual arts to create a poetically unique universe.

There is an ensemble of six men.

MA: The men are phantoms of Medea’s subconscious that emerge to play various roles within her story. Yuan Yuan Liang (costume designer) and I were interested in architectural pieces of attire that visually aligned them to Medea. So, we started with a chain locket Medea (played by Yale School of Drama 2018 graduate Francesca Fernandez McKenzie) wears around her neck the whole show and built outward from that. We took the materiality of that object and created this chain sculpture, with the same pendent, which became the men’s “uniform”, if you will. The chain, combined with aged black pants and a black mask that completely covers the face, create the effect of making the men stylistically “other.”

What do you want the audience to walk away with?

MA: I think good work allows audiences to see aspects of themselves in the characters, so each audience member will, ideally, walk away with something uniquely galvanizing to them. Overall, I hope people leave with a greater sense of empathy and awareness of themselves and people they might think of as different from themselves.