Annie Get Your Gun, And Your Guy, and Get You to Broadway 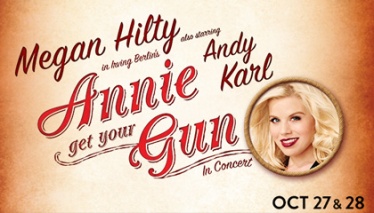 Annie Get Your Gun, And Your Guy, and Get You to Broadway

In a surprise moment of musical theatre good luck, I was able to attend the New York City Center’s Annual Gala performance of Irving Berlin’s Annie Get Your Gun. A friend of a good friend had a great ticket that the owner couldn’t use. His bad luck was my good fortune. I had wanted to see this musical for years, as I had never seen this show before, but I couldn’t seem to get any of my regular musical theatre junkies to go with 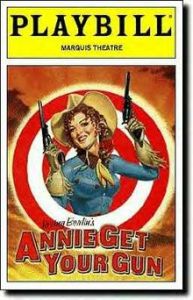 So here was my lucky chance, and to make this moment even better, I was going to see Megan Hilty (from NBC’s Smash) sing the title role, well, I just felt so gosh darn lucky, (sounds better if you read that with the same wonderful country twang that Hilty brought to her Annie 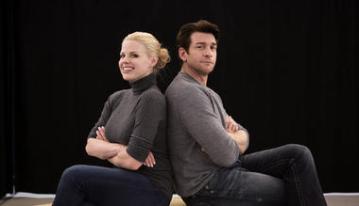 Oakley).  To top it all off, Andy Karl (Rocky on Broadway – double swoon) was taking on the role of Frank Butler, the handsome studly womanizing star of the traveling Wild West show, and self described “Bad, Bad Man”.  I was in musical Encore! heaven.

These two are a Broadway dream duo.  They were just magnificent in their respective parts.  Both sang powerfully and beautifully, such classic songs such as “You Can’t Get a Man with a Gun”, “The Girl That I Marry”, “An Old Fashioned Wedding”, and the often-reprised song of songs, “There’s No Business Like Show Business”.  (Side note, maybe one too many reprises for my liking….but I won’t quibble.) Megan Hilty is truly a Broadway star, and I can’t wait to see her take on any of the other big 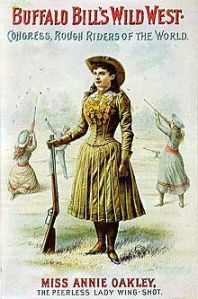 voiced powerhouse roles that she has in store for her on the Great White Way.  Andy Karl’s velvety voice reminded me of an old time Broadway crooner; it was so delicious and wonderful to listen to.  Both are perfectly cast and having a ton of fun.  When they sang “Anything You Can Do, I Can Do Better” we all felt like we were witnessing something wonderful and very special. It made me wish a wee bit that this was a more fully realized Encores! production, like the others I had seen.  These two deserve a chance to sing and act their hearts out on a more realized set and without their scripts/songbooks in hand.  (Although they both got a few good warm laughs from the loving audience as they played with this setup.) 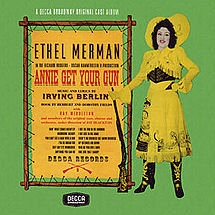 As staged in this production, directed by John Rando, this was more like a playful concert of a somewhat silly old-fashioned classic musical. And as with all Encores productions, it was a special gift to hear these songs played by the wonderful full sound of the Encores! Orchestra (musical director: Rob Berman). I felt very fortunate that I was in attendance watching these pros “Doin’ What Comes Natur’lly”.  Thank you City Center Encores! and a big Yee Haw to you all.