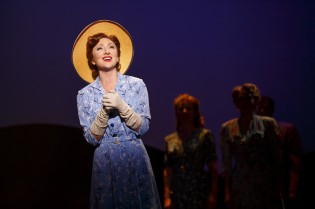 Bright Star is wrapping up its glorious run over at the Kennedy Center in Washington DC this Sunday before it opens up on Broadway this March (opening night March 24th).  And what a bright and lovely star it is. This musical, created in collaboration between Steve Martin (music, book, story) and Edie Brickell (music, lyrics, story), and inspired by their Grammy-winning album, “Love Has Come for You”, is steeped in southern blue grass tradition. That compelling yet emotionally deep twang winds its magic throughout this piece, giving it a strong yet sad quality that’s difficult to explain in any other manner. The music has a laziness like a sweet molasses but a compelling rhythm fueled by the banjo and strengthened by the fiddle.

Directed magnificently and stylishly by Walter Bobbie, this sweet show feels like a poetic love letter to home and what makes us who we are. Bright Star begins with a woman passionately singing a quite beautiful song “If You Knew my Story”. And as the rest of the cast joins in, we are all ears, curious about what she has to share with us. A part of the amazing blue grass band is situated on the stage, where it will remain throughout the show, housed in the framework of a country shack.  This is basically what the show is rooted in; the feeling of home and the love of your people.  It’s about the small-town south, which can never be erased from the soul nor from it’s blue grass roots. It’s about family, love, one’s upbringing, one’s faith, and the poetry of our hearts. 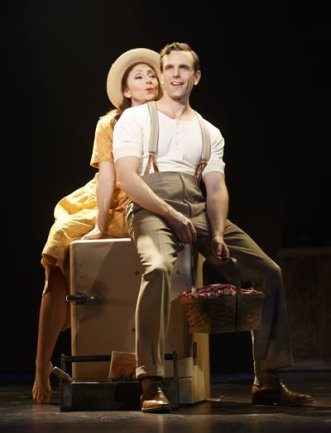 The lead characters can leave, but they will always be drawn back.  Returning home to the Appalachian countryside from the War (WW2), a sweetly handsome Billy Cane (a perfect A. J. Shively) dreams of becoming a writer of stories. Waiting for him and pining for him, is the lovely and lovesick Margo (a winning Hannah Elles). Hoping to get published, Billy leaves this small town, and meets a prominent literary magazine editor, Alice Murphy (a magnificent Carmen Cusack who is sure to be a hit with the critics when she makes her Broadway debut in March). Cusack displays a most glorious voice and inhabits both younger and older versions of herself almost magically. As it 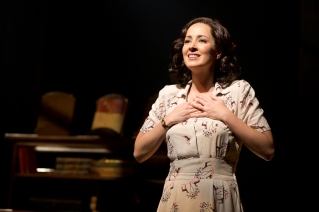 turns out, Alice is the woman who transfixes us in the opening number of Bright Star telling us she has a story to tell. That story involves a love in her past, and his name is Jimmy Ray, a sexy and glorious Paul Alexander Nolan; and they make quite the exciting duo to watch. Looking forward and backward, we hear their stories about love and life, and heartbreak through one absolutely beautiful song after another beautiful song. I won’t say much more about the plot of this sweet and upsetting tale, but I will say that every performance touched my heart. Kudos to Emily Padgett and Jeff Blumenkrantz for making secondary roles so much fun and real. And even though the plot is a bit simplistic, and the story a bit predictable, I was fully invested and moved to tears by the end.

Beyond the incredible craftsmanship of the music and lyrics, and the exquisite musical direction and orchestra, much credit has to be given to the excellent production and all that were involved.  The scenic designer, Eugene Lee creates such a wonderful and stylistic environment for this story to be told, and within that, Josh Rhodes choreography shines, and even the set changes feel enhanced and heightened by the choreographed and stylized movement of the seamless and precise cast. Jane Greenwood’s costumes are equally exacting and exquisitely on-point. 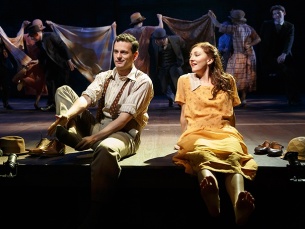 But it’s really the music and the lyrics that make this piece fly.  It’s going to be interested to see what Broadway makes of this twangy sweet musical.  Staying so true to the bluegrass style gives it such a strong heart and drive, but it might lack some of the big song moments that tends to bring down the typical Broadway house (see If/Then or The Color Purple, for example, which has numerous big moments).  Bright Star doesn’t have that big ballad, but the song that it does have, “So Familiar”, so sumptuously sung by Cusack as the tale draws to an end, elicits such a strong reaction in our heart. Quieter yes, but just as heart wrenching. A true blue grass poem to love and home, charming and sincere, given to us to savor like a tall refreshing glass of southern sweet tea. 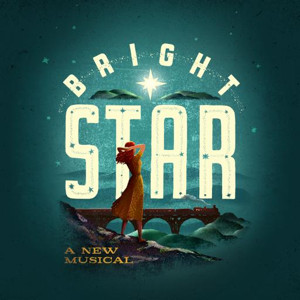