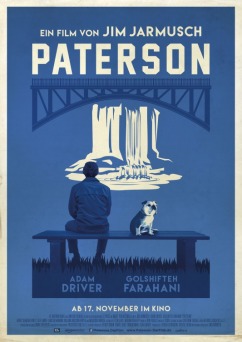 I am no poet, by anyone’s stretch of the imagination. I couldn’t write a poem if I tried, and if I did, it would be so forced it would fail.  Paterson, a film by Jim Jarmusch that was screened at the New York Film Festival this past Monday evening, does not fail. The only word that one can truly describe this film is ‘poetic’. To describe this film with the words charming or beautiful, although appropriate, feels a bit too pedestrian. It is a much deeper experience then those words imply. Every shot and every image is like a poem mapped out in imagery and the spoken word. Jarmusch, who directed and wrote this film, finds such beauty and subtlety in all the quiet moments of life.  The life shown is one of a bus driver that just happens to be a poet as well, although you would never hear him describe himself with such a title. He is beautifully played by Adam Driver, scribbling in his private journal poems of love, simplicity, and depth at moments of stillness, as he waits to start his shift or has lunch by the falls of Paterson, New Jersey where this story is told.

This poet/driver also happens to be named Paterson. A twin in a way to his town, or maybe to his bus, the #23 Paterson route. The twin metaphor, confusing at it is, plays out day to day and in the dreams of his sleepy wife (played with eccentric charm by Golshifteh Farahani). And everyday, Paterson wakes to a silent alarm in his head, snuggles and kisses his sweet lovely (and slightly quirky) wife, and goes off on his day. Monday through Friday nothing much changes in his daily routine, he works, has dinner with his wife, walks the dog (a star making performance), and has a beer at his neighborhood bar, but Paterson (the man and the movie) soaks in every last bit of poetic beauty in the mundane; from the way they wake up every morning, to the way two friends speak to each other on a bus. It’s all treated as worthy of his attention, and ours.

Paterson is a quiet bit of beauty laid out before us, just like the words and phrases of his poems written across the screen. Soak this in, you will not leave hungry.