It all begins, under the broken neon red Torch Song sign, with the illusion of perfection with big dash of fabulousness, well, one that is under construction. A drag queen preparing in front of a mirror for her performance to come. Applying the layers of camouflage make-up, slinking into a glittery long dress, slipping on some high heels, and carefully donning a wig all the while engaging us in an intimate discourse about unrequited love and desire in a gay man’s world. The application is like preparation for a type of war that is going on in the world outside, a protective armor against the hate and misunderstanding of a gay man’s right to be who they are. All the attempts of love, false or otherwise, coupled with the adoration an audience will give is a tonic (gin perhaps) against what lies beyond in the early 1980’s in New York and America. And now in our present situation, come to think of it. All of that, wrapped up in the final “tragic Torch Song status” of heart break and pain that “ I admire so in others”, as the main character laments; the signature trademark of a true drag queen star. The ‘Lady Blues’ finale song that is destined to always bring down the house in the end. That’s what a drag performer aims for, and what this play wonderful and respectfully delivers.
A ‘Torch Song’ is defined as a sentimental love song, in which the singer laments on unrequited or lost love. This is the emotional staple of every drag queen’s repertoire. It’s the drama and the tragedy of the evening. The drag queen, at least the one in Harvey Fierstein’s Torch Song revels in the hurt of unrequited love, of lost love, or forbidden love. In this production at Second Stage Theatre, it encompasses every part of each, rolled up into each part of the trilogy, Torch Song. Every relationship within this emotionally intoxicating play explores the idea of love, wanting love, giving love, and holding up a flame for unrequited love, all of which are complicated, addictive, and all of which can bring such pain. No surprise there.
Most people who saw the original production back in the early 1980’s remember it as if it was etched into their soul in the same way we talk about muscle memory. The play resides in the fibers of their hearts and anyone who was lucky enough to see it on stage will gladly tell you all the ways it affected them. I was not one of these lucky souls to have been witness to Harvey Fierstein’s devastating performance, described at the time by Mel Gussow (New York Times, Nov. 1, 1981) as “an act of compelling virtuosity”, but you can feel the historic emotionality in the air of this off-Broadway theater. It is thick, and heavy, yet devastatingly glorious.

Reworked back then, into a singular four-hour theatrical event, Torch Song Trilogy as it was called, opened at the uptown Richard Allen Center in October 1981, produced by The Glines, a nonprofit organization dedicated to forwarding gay-themed cultural endeavors. It transferred on January 15, 1982 to the Actors’ Playhouse in Greenwich Village, where it ran for 117 performances. The cast included Fierstein as Arnold, Joel Crothers as Ed, Paul Joynt as Alan, Matthew Broderick as David, and a star-making turn for Estelle Getty as Mrs. Beckoff. Subsequently, on June 10, 1982, Torch Song Trilogy opened spectacularly on Broadway at the Little Theatre, where it ran for a wondrous 1,222 performances. It won a Tony Award for Best Play (Fierstein) and Best Performance by a Leading Actor in a Play (Fierstein) and instantly became iconic. Fierstein, Joynt, and Getty remained, and were joined by Court Miller as Ed and Fisher Stevens as David. I wish that this had been one of the plays I saw during any of my numerous secret trips (don’t tell my Ma) to New York City when I was a teen. How it would have affected me, is beyond comprehension. I never had to deal with the parental drama that Fierstein wrote so vividly about, but it certainly still resonates to this very day. One thing I am sure of, had I seen Torch Song Trilogy in 1981, my worldview would have been altered, most likely for the better. In the same way I believe anyone seeing this play now at Second Stage will be altered forever as well.

The newly reworked and edited trilogy by Fierstien, now goes by the more succinct Torch Song. The three chapters remain, brightly claiming their presence over the individual scenarios, but shortened into two solid acts. The story remains centered on Arnold Beckoff, played impeccably by the magnificent Michael Urie (Shows for Days, Buyer & Cellar). He manages, with a thrilling expertise to both create his own clear version of this iconic Jewish gay man and drag queen performer while also paying tribute to the character created by Fierstein. It’s a loving and brave performance by an actor coming into his own, owning the stage at every moment with ease, letting us into Arnold’s heart and soul. His opening soliloquy is a master class in vulnerability and engagement, in which he explains his cynical disillusionment with love. It’s clear his heart yearns to hear someone he cares for say, “I love you”, while also admitting his weaknesses and his complexities with the giving of his own heart. The beautifully signed “not” “enough” says everything you need to know about Arnold, and Urie does him proud, embodying him purely and entirely. It’s a thorough and thoughtfully brilliant performance for the ages. 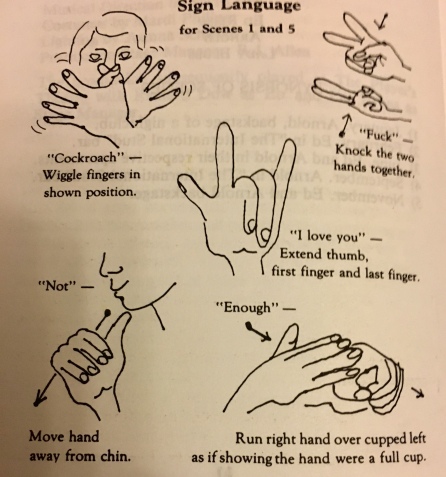 At times, my companion thought he sounded whiney and maybe that is true, somewhat. It’s an interesting cultural dynamic to consider, the fine line between whiney, needy, desperate but honest and vulnerable. Maybe when written in the 1970’s, gay men could act and be perceived as whiney and desperate more freely, at least among their own kind, while in our current gay culture, that is seen as weak and discouraged. This is debatable and I’m talking more about inner gay culture rather than a more global one. Gay men today seem more perplexed by acts of femininity within their own, shaming and marginalizing those that aren’t masculine. It’s not that simple, I know, and possibly better for a discussion of perception and gay culture within someone’s PhD thesis than here in a few sentences. For me, Urie walks the difficult tight rope expertly by being the Arnold he wants to be with truth and an open heart. His comic ability, so apparent in the hilarious The Government Inspector is on full display here, but it’s in his thoughtfulness and humanity that we really see something special and profound.
Each of the three stories told offer up different complexities in Arnold’s quest for love, acceptance, and companionship. The first, International Stud is embodied in the handsome and unavailable Ed, strong and solidly played by Ward Horton (Neil LaBute’s Bash), who may not be the international variety, but he sure is the American 1980’s equivalent. The whole segment is perfectly orchestrated, edited, and presented in mostly a series of spectacularly performed monologues. Climaxing hilariously in the back room, but leaving its emotional climax for the scene when Ed and Arnold finally engage face to face in a fierce, yet honest reunion and ending. Or is it just a beginning?

Stay tuned for part two, Fugue in a Nursery, which jumps forward a year, and introduces us to two more characters; the lovely and feisty Roxanna Hope Radia (Broadway’s Frost/Nixon, After the Fall) as Laurel, and the equally lovely and adorable Michael Rosen (Broadway’s On The Town, West Side Story) as Alan. Beautifully balanced against each other, the two new love interests add a wonderful new depth to the idea of complicated love relating. All the interpersonal drama is played out with wit and authentic charm, an impressive piece of acrobatic dexterity. My least favorite of the trilogy, it still resonates and draws us in through a dynamic love story that sets us up perfectly for the final punch that is part three.

So prepare yourself boys and girls, and all those who identify somewhere in between or beyond, for part three, Widows and Children First! is the segment that all earlier theatrical memories seem to circulate around. Estelle Getty seems to be the actor most remembered, second to Fierstein, and no wonder. It’s a part written to have the greatest impact. And here at the Second Stage Theater, the role of ‘Jewish Mother visiting her gay son’ is played miraculously by Mercedes Ruehl (Broadway’s Lost in Yonkers, The Shadowbox) who matches Urie’s Arnold as if they were truly related. Their entanglement is beyond explanation. It’s layered and deep, filled with tragedy, trauma, and a love that aches. It is the true Torch Song of the evening, clawing at our hearts, and pleading for compassion. For the lot of them. That includes the lovely and beautifully rendered performance by Jack DiFalco (Roundabout’s Marvin’s Room, MCC’s Yen) as foster son, David, and the touching return of Horton’s Ed. ‘Family’ is evident in the end, be it ever so humble and strange, and filled with love requited. “You hear that, Ma?“, as Big Maybelle sings, “I Will Never Turn My Back On You“.

The play’s true vulnerability lies in the honest depiction of its characters and their struggles with those others that hold that special place in their heart, courtesy of the exacting direction by Moisés Kaufman (33 Variations, I Am My Own Wife). No one is safe in Torch Song from pain, confusion, anger, and disappointment; not a mother, a lover, or a son, but the power of Torch Song lies in its balls. Figuratively speaking. It has guts and a drive to grab hold of some respect and dignity within the pain, against all odds, and it does so beautifully. The fight is ageless, as this play from the early 1980’s resonates as powerfully now as it did then. Maybe not in the same detailed way, as the culture of today has changed a bit here and there, advanced while staying the same (you’ll still hear the same gasps of recognition when certain old and negative comments are stated), but it remains, most definitely and defiantly, a profound, hilarious and deeply affecting experience. One that will be remembered for a lifetime.

“But that’s alright. It becomes part of you, like wearing a ring or a pair of glasses. You get used to it and it’s good [so good] because it makes sure you don’t forget. You don’t want to forget him, do you?” I sure don’t. 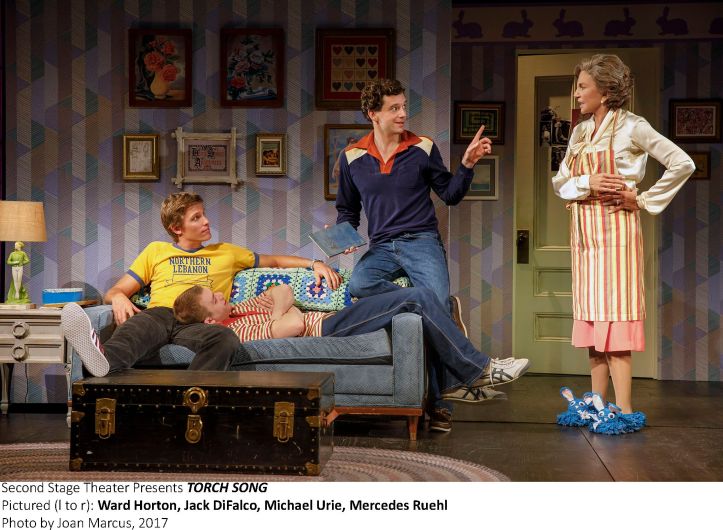