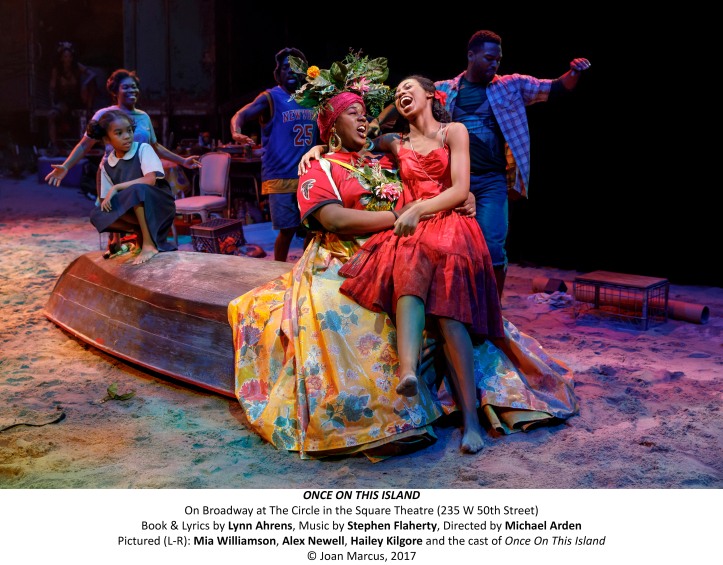 We enter into a world already in motion. It looks like a large sandbox made for adults to play in, reeling in the aftermath of a storm. The sand that covers the stage is littered with debris, a fallen post near the edge of a body of water, and a shack in the background. The characters are salvaging what is left, engaging with one another and the island they inhabit. Wandering about with these island folk who live their lives in the French Antilles is a caring doctor and even a goat (but dontcha dare try to take a picture of it, or you will get a firm scolding). We have definitely landed in another time and place. Fallen into the lush and musically intoxicating 1990 Broadway musical revival, Once On This Island, at the intimate Circle in the Square Theatre, based on the 1985 novel My Love, My Love; or, The Peasant Girl by Rosa Guy.

“The story begins on the night of a flood” with thunder booming and lighting flashing overhead. A small girl cries in fear, and in an attempt to comfort her, the village storytellers tell her the intoxicating tale of a peasant girl by the name of Ti Moune, who falls in love with a grand homme, a young gentleman from the other side of the island and a world away from this girl. This is a story of differences, of life, love, and all the pain and effervescence that it may bring. It is also about hope and faith that can reside in a community pulled apart by racial inequality, the walls of differing societal constructs, and destroyed by the turmoil Mother Nature and the Gods can rain down on us silly humans. 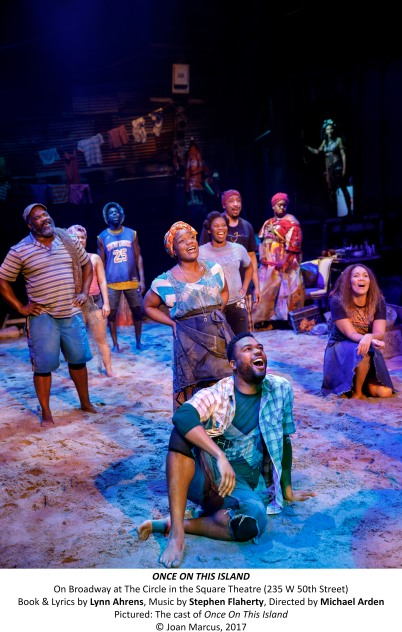 It’s a Romeo and Juliet tale, etched with racism and elitism, a perfect fable for the young girl to hear, but also, more importantly for the here and now that we find ourselves. In many ways, I wish we weren’t given privy to these wandering island souls as we take our seats before the play begins. Those first words spoken should instantly transport us, but as staged by director, Michael Arden, it is a slower descent. “There is an island where rivers run deep”, says one of the storytellers breaking the spell and pushing us forward from the real world into theirs. I wanted a more abrupt shift into this musical fable, desiring a greater sense of immediate awe and electricity, although the words smoothly and gently whisked me to her side over time. Once I found myself comfortably there, I could breath in the humid warm air of the Caribbean, and even though those first moments are less than engaging, the first number, ‘We Dance‘, with the uplifting and energetic choreography by Camille A. Brown (PH’s Bella) grab hold of our hearts and souls quickly and we are transported into the world of Once On This Island, as if carried in on an island breeze and rhythmic beat.

There is also the visual splendor of that first storm, courtesy of the beautiful work by set designer, Dane Laffrey (Deaf West’s Spring Awakening, Fool For Love), lighting designer, Jules Fisher + Peggy Eisenhauer (Broadway’s Shuffle Along…), and sound by Peter Hylenski (Anastasia, Something Rotten). It is enough to thoroughly engage that sense of enchantment that I was so hoping for from the beginning of Lynn Ahrens (book and lyrics) and Stephen Flaherty’s (music) Once On This Island. We see a young girl, played by Emerson Davis (Annie Warbucks) seemingly float in the wild stormy waters of the island. The immense power of all the disasters that have occurred lately around our world; from the storms and earthquakes in Haiti to the latest in Houston and Puerto Rico. They come flickering through our minds and make our heart beat as wild as the scenario in front of us. It’s a powerfully creative introduction to what’s in store, and even though the setting is a bit too busy and cluttered, the focus and energy is as clear and exciting as the music and the movement before us. 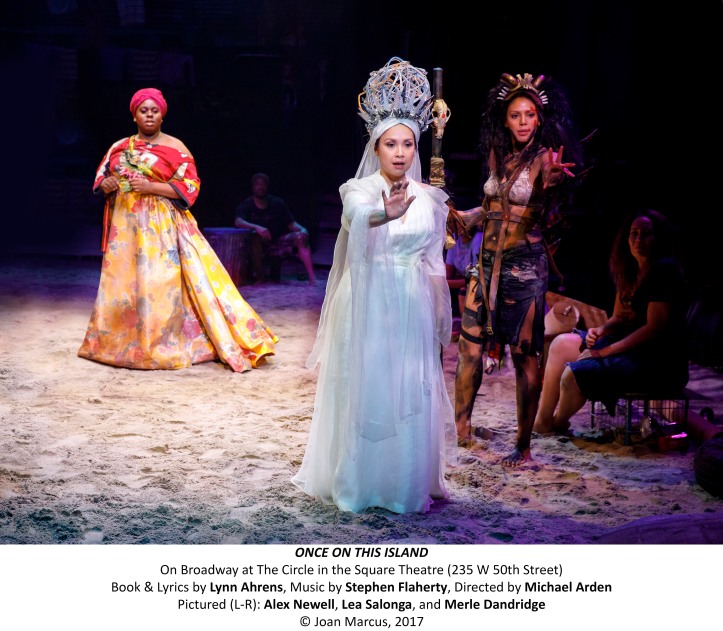 The main headliner in Once On This Island is the beautifully regal Lea Solonga (Allegiance, Miss Saigon) who has the loveliest of voices and is perfect for her role as Erzulie: Goddess of Love. She exhales tenderness and care in her beautiful number, ‘The Human Heart‘, but the real standout amongst the Gods is Alex Newell, best known for playing the transgender student Unique Adams on the Fox musical series Glee. As Goddess Asaka: Mother of the Earth, Newell delivers the knock-down number, ‘Mama Will Provide‘ that is so very deserving of the standing ovation given mid-show. It’s truly the most electrifying moment on the Broadway stage these days with all the spark and fire imaginable in that flowing gown and headdress. The other two Gods, Quentin Earl Darrington (Broadway’s Cats, Ragtime) as the God of Water, Agwe, and Merle Dandridge (Broadway’s Spamalot, Rent) as the Demon of Death, Papa Ge, play their roles magnificently and are entwined in the dynamics with ease and power, but neither come close to the shock and awe of Newel, nor the melodic beauty of Salonga. 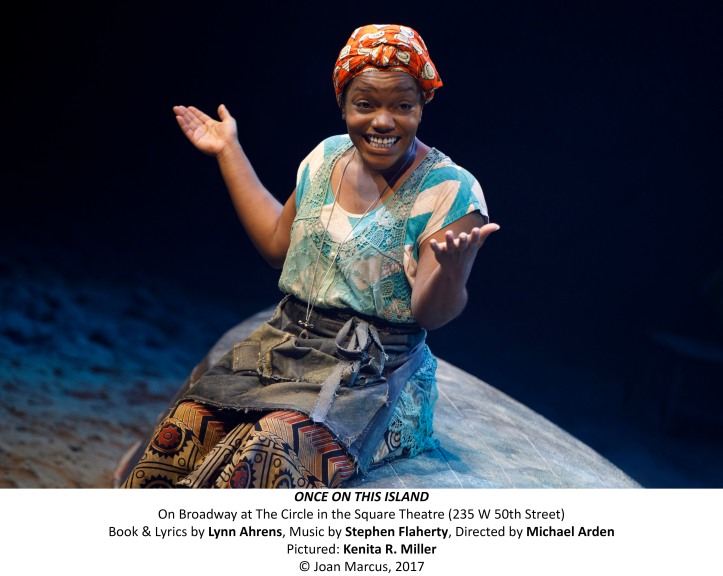 Within this Caribbean-based Romeo and Juliet story, the wonderfully gifted Hailey Kilgore (Ain’t Misbehavin) making her Broadway debut, portrays the young orphaned girl, Ti Houne. This role, the seemingly insignificant teenage girl who is at the center of this myth and legend was originally played by LaChanze on Broadway in 1990, which is a high bar to vault over, but Kilgore does with a fair bit of ease, although her petulance gets a bit much about half way through.  After being found by the “black as night” peasants,  Mama Euralie (the magnificent and warm Kenita R. Miller) and Tonton Julian (a fantastic and solid Phillip Boykin) who live on one side of the island, she is taken in, adopted and grows up in their loving care. The young girl feeling lost and unfocused prays to the Gods to let her know her purpose in the lovely ‘Waiting for Life‘. Kilgore, greeted by the audience with a tremendous round of applause, draws us in to her plight, passion, and desire.  She’s not entirely lovable, mind you, as she is a bit of a handful for her two older adoptive parents. She is strong minded and persistent in her dreams, much to her parents dismay, to become more like the fast-driving strangers who live on the other side of the island, the grands hommes, who see themselves as much higher in the social classes because they are the lighter-skinned descendants of the original French planters and their slaves. 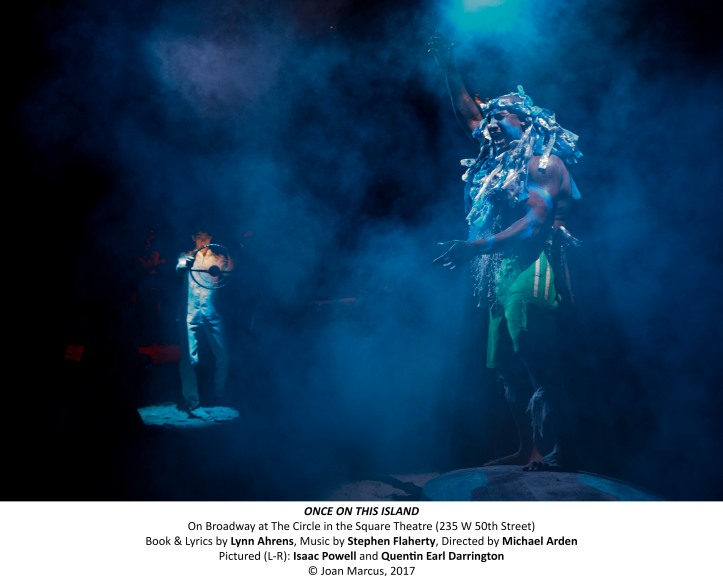 The Gods hear her plea, and in the way that Gods are prone to play with us humans, the Goddess of Love and the Demon of Death quibble about the strength of what they each represent, and suggest a playful bet to prove which is stronger: love or death. Agwe, the magnetic God of Water, singing the powerful song ‘Rain‘ with that gorgeous voice of his, creates a storm that causes the car of Daniel Beauxhomme, a young grande homme played simply and touchingly by the slight Isaac Powell, to crash. Ti Moune finds his destroyed body and tries to restore this intruder back to health. Under the watchful eye of all four Gods, Ti Moune fulfills their game and falls in love with the stranger and is convinced he loves her too. When Papa Ge, the Demon of Death comes for Daniel’s soul as he teeters on the verge of death, Ti Moune desperately offers her own in exchange.  We all know at this point that the day of reckoning will eventually come for Ti Moune.  Papa Ge will not be left unpaid. 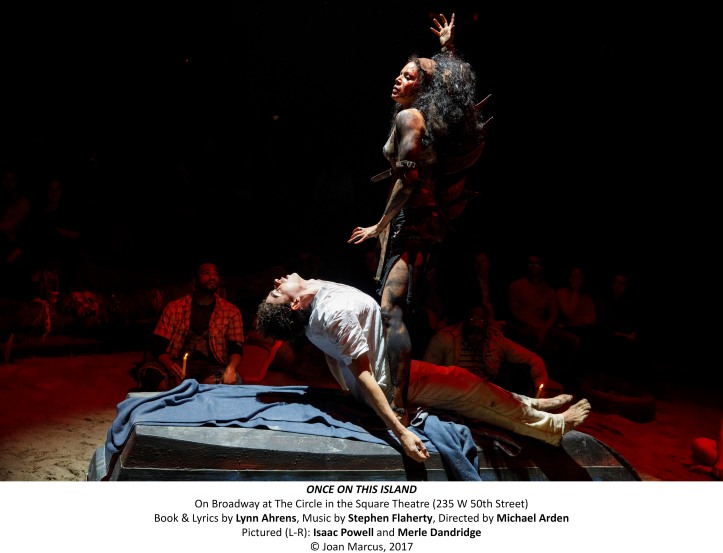 The cast is set for what is to follow, and when the young man is finally returned to his lavish life on the other side, the conflict is uncovered, like the stone dance floor underneath the sand and debris. This piece of musical theatre, although not driving or charged with strong emotionality, is beautifully written and performed. The music and songs soar and the story flows along in the manner you would tell this tale to a young scared girl, nervous about the storm overhead. As it proceeds, the story of Ti Moune and her saved young man deepen beyond just young love, expanding into mythology and the meaning of forgiveness and love that lasts beyond a lifetime. The storytellers, all earthy and connected, share this retelling of how a peasant girl proved the power of love could bring together the people of the island. Her legacy will branch out far beyond her personal story, and the worlds will come together to play in her branches of love and connection. The little girl who was frightened by the storm finds herself a storyteller eventually, telling the story to another generation, just like this wonderful production of Once On This Island is doing, helping us remember to love, to forgive, and to have hope.

Leave a Reply to The Cher Show is Fantastically and Exactly What the Variety Show Hostess has Ordered. – front mezz junkies Cancel reply