2ST’s Messy Town Painted as Red as a Cardinal

Review: 2ST’s Messy Town Painted as Red as a Cardinal

Greg Pierce likes to tell some captivating tales, especially as a musical co-conspirator with John Kander in The Landing and Kid Victory, so this lightly conceptual dramedy, starring two solid television comedic actors, Anna Chlumsky from “Veep” and Adam Pally from “Happy Endings” sounds like a no-brainer for some twisted fun and complex characterizations.  And I would say that these expectations are well founded and fairly true, although, as it is with the town of Cardinal, the playwright, and therefore the characters, paint themselves into a corner, with no solid or clear way out without making a mess.

Lydia Lensky, played with an excitable and fascinating aggression by the wonderful Chlumsky (Broadway’s Living on Love), has an urban renewal idea that seems a bit out there, in the way that her character seems truly a bit out there as well.  But she is persistent and so confident that the young Mayor, Jeff Torm, played with a puppy-dog sweetness speckled with an anxious timidness by the very appealing Pally (a member of the Upright Citizens Brigade since 2003) somehow allows it to move forward.  The town votes on her outlandish idea, to paint the depressed downtown core of Cardinal a deep red, every store front and sign, with hopes that it will attract enough attention to bring back commerce and interest in this dying once-industrial town, and surprise, surprise, the idea wins. Lydia believes that much like the blue city of Chefchaouen, Morocco, or the hello city of Izamal, Mexico, that the color Red is just what the town needs to draw much needed interest and investment into the failing Rust Belt town that Lydia grew up in. Oddly enough, and I’m not sure what Pierce is trying to say with this one convoluted plot devise, but the idea, which sounds intriguing although implausible, begins to unravel both in terms of the town’s plan of hope and the play’s overall direction. 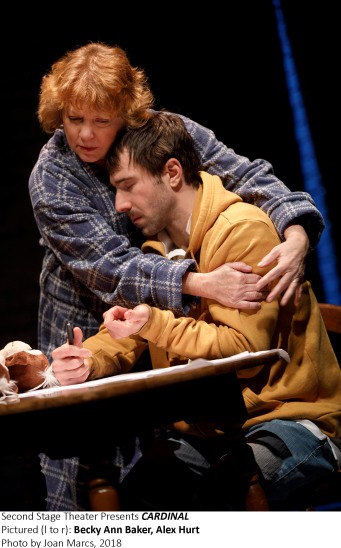 Directed with a slap dash erraticness by Kate Whoriskey (The Public/Broadway’s Sweat) the play veers off balance from what first started to feel like a quirky rom-com intrigue into something that has to do with small town racial tensions and the effects of new urban planning on its old school residents, with an odd bit of gun violence thrown in a long the way.  Everyone on stage is giving us a lot to peer into and see what’s underneath the veneer of that fresh coat of paint, but it doesn’t seem to add up to anything cohesive or telling when you step back and look at what was painted here by Pierce.  Becky Ann Baker (Park Ave Armory’s The Hairy Ape), as always, is engaging and deeply convincing as the owner of the long standing Bread & Buttons Bakery that she operates with the baking expertise of her autistic grown son, played distinctly by Alex Hurt (Roundabout’s Love, Love, Love).  The two live within a sentimental landscape, well crafted by Pierce with strong dialogue and compelling interactions, but I never quite understood their trajectory, and what they were here to show us, beyond the trouble some modern urban renewal ideas brings down upon the older townsfolk that were once considered the back bone of Main Street, USA. 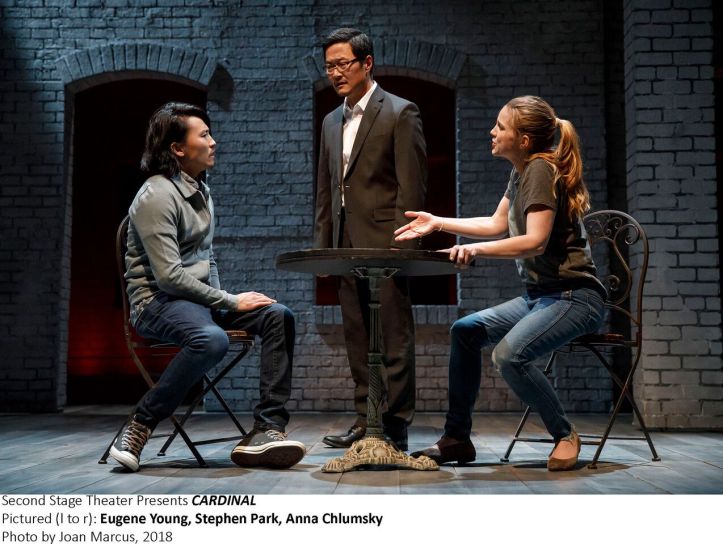 On the other side of this modernist approach to urban planning, Pierce gives us the slightly shady entrepreneur, Li-Wie Chen, played effectively by the fun Stephen Park (PH’s Aubergine) and his confused yet charming son, played with a comic silliness by Eugene Young (HBO’s “Veep“) that have shades of caricature bad-guy devilishness painted onto them, although luckily, there is enough comic overtones to save them from themselves.  Chen wants to take advantage of their ‘Paint the Town Red’ plan, regardless of whether he creates an authentic undercoat or not. As the town’s brick walls that make up the backdrop of the uninteresting set (scenic design: Derek McLane; costumes: Jennifer Moeller; lighting: Amith Chandrashaker; sound design: Leah Gelpe) get a coat of Cardinal Red, it seems Chen’s ideas are going to be quite successful financially, at least for him, but sadly, Chen is going to have far more luck then Pierce’s structuring of this play. 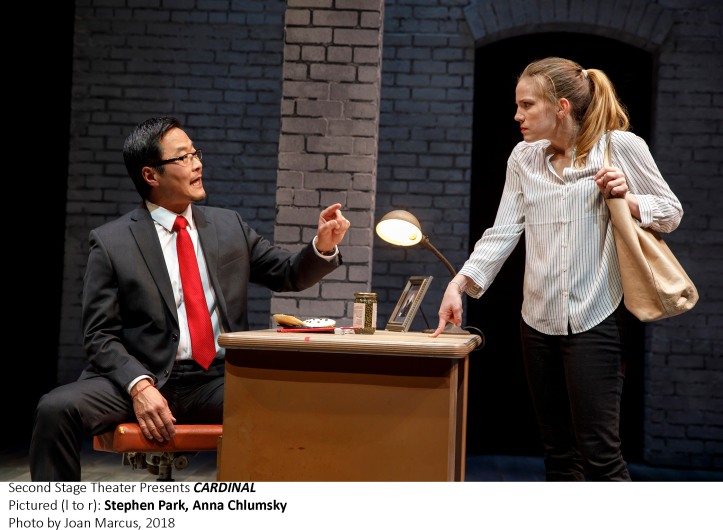 This is no grand and beautiful Seurat painting, like the magnificent A Sunday Afternoon on the Island of La Grande Jatte, that may look messy and disjointed up-close, but one only needs to take a few step backs to see its overall structure and intricate wonder.  Pierce’s play, Cardinal is basically the opposite of a pointillistic painting.  In the moment to moment of each well-versed scene, the interactions play out intelligently and feel compelling, but once one steps back and looks at it from a distance, the scenes don’t melt into a grand or more complex structure.  They hang here and there on their own accord without a great deal pulling them together into anything special.  Pierce is definitely an innovator of ideas and complexities in his myriad of tales, but in this particular painting, he fails to draw us into his impressionistic sensibility and show us something precise and large scale.