Sweat on Broadway: Do Sweat the Big Stuff

Sweat on Broadway: Do Sweat the Big Stuff

By Ross
It still packs a wallop, this hard-edged play by Lynn Nottage (Ruined, By the Way, Meet Vera Stark), that had its pre-Broadway run last fall at the Public Theatre. It smacked me hard when I saw it downtown last December after that most disastrous presidential election. The play was almost impossible to sit through with all my own personal rage and frustration flying around my head. It was difficult to empathize with these characters and their own rage and frustration as these folks were sure-fire future Trump voters. Coming from a confused and scared place, their dialogue was laced with racism and blindness. Seeing it again, months into this new federal administration, Sweat on the big Broadway stage at Studio 54 has only brought the frustrations of these characters into greater more earthbound focus. It might be due to the fact that my own personal upset, although not gone, is less raw and overwhelming. It’s still abundantly clear that when someone tells you they aren’t a racist, like Tracey does, in a Tony worthy performance by Johanna Day (August: Osage County), to the desperate and hard working Oscar, a wonderfully quiet and authentic Carlo Alban (CTG’s A Parallelogram), just before throwing around one after another ridiculously inappropriate and racist remarks, don’t believe them. Know that she, just like us, is carrying around such strong and utterly stereotypical viewpoints about those that are different from her, and when fear and desperation hit, blame desperately needs to be directed at someone; anyone, which usually means, someone in a weaker position and someone quite different from herself. 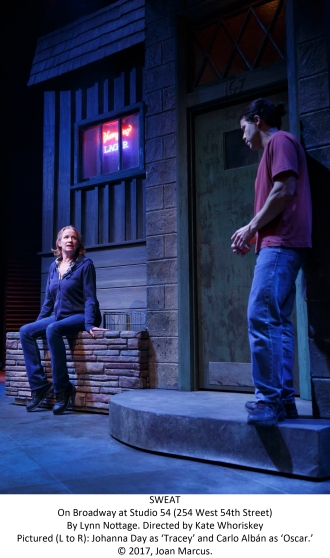 That very telling and exquisitely written scene between Tracey and Oscar that occurs half way through Act I shines an uncomfortably bright light on the underlying racism that exists in these worker’s foundation.  She explains to Oscar, who she first refers to as a green card carrying Puerto Rican (he corrects her with a subtly defiant, “I’m Colombian”), why he doesn’t deserve to work at the factory.  “You weren’t born here”. “Yes I was”. “Well, you weren’t born in this town”. “Yes I was”. And without missing a beat, “Well, my grandfather and my father worked in that factory, as I do, and my son does”. (forgive me if I don’t have the exact dialogue word for word). In Tracey’s mind, this is not racism, just facts; her entitlement.  What the sure-to-be Tony nominated director Kate Whoriskey (PH’s Aubergine) has done with Nottage’s words is to not shy away from the horribleness that can surface in all of our collective hearts. If push comes to shove, and I mean that both figuratively and physically, we all can go there.
What Sweat is trying to do here is to tell the bigger story than the surface one. One that we, the well-informed media-watching voters didn’t take seriously during last fall’s election. These are the scenarios that had a toll on the outcome on election night, ushering that vile man into America’s highest office. In my December 13th review of the Public Theater’s production, I overheard a woman state, “If Hillary had seen this play, maybe the Election would have had a different outcome”. It’s a captivating question that exemplifies all that this play is fueled by. I totally understand where she’s coming from although I have a feeling the response is a lot more complicated than the statement. It’s an upsetting experience to watch, one that I hesitated in reliving because of the discomfort I experienced, but that being said, the play is also intensely illuminating.  The knowledge of the electoral outcome still stings and hangs over our collective hearts as we watch this stellar cast unwind their tale. It’s hard not to go there in our minds, that this play, mostly set in the pre-Obama days of 2000 feels as relevant to the 2016 election as any play I saw last year, even the directly focused election year play cycle, The Gabriels that also played downtown at the Public last fall.

Even knowing the final outcome of Sweat, the power and the discomfort is still epically visceral and disconcerting.  The set up is clear, especially when we shift from the initial scene of a parole officer (a perfect Lance Coadie Williams) speaking separately with two young men in 2008. Both have committed a crime eight years prior and have been released.  A crime that we aren’t going to be privy to the details just yet. Over on one side, in one office, we have the defiant tattooed ‘angry young white man’, Jason, a much improved and dynamic Will Pullen (MCC’s Punk Rock) clearly struggling with his inner demons.  Prison may actually have been more damaging to this man, solidifying his hatred. In the other office, we see a sorrowful young black man, Chris, a devastatingly good Kris Davis (LCT’s The Royale), who feels the heavy weight of the terrible crime that was committed. He states, “a couple minutes, and your whole life changes”. In him, we see the difficult struggle of a dislodged man, trying to find his way beyond his mistake, and a deep desire for something else, if that’s even possible.

We then go back to the year 2000 to the factory town of Reading, PA on a collective journey to discover what happened to these two young men. We join the factory workers who have congregated in a bar; celebrating a birthday, unwinding after a shift on the floor of a steel tubing factory, contemplating their individual futures over a beer (a perfectly design team that is sure to get nominated- scenic design: John Lee Beatty; costume design: Jennifer Moeller; lighting design: Peter Kaczorowski; sound design: Rob Milburn & Michael Bodeen; projection design: Jeff Sugg). Some of these characters still have dreams; some have plans, while others, just want to survive their lot in life. A tightly wound ball of discomfort, Tracey and her equally matched son, Jason, hold dearly to an idea of life long security by continuing the family tradition of working on the floor until retirement. Cynthia, a detailed and strong Michelle Wilson (A Raison in the Sun) and her son, Chris, seem to have the seed of advancement in their souls, and dream of moving up or moving beyond. Stan, the solid James Colby, the bartender at their watering hole, used to be on the same factory line, but an injury set him off track; free of the factory but confined to working the rest of his days in that neighborhood bar.

They are family, these people. They work the line together and think they understand one another. What becomes clear is that their bonds are fragile and when the balance is upset, the gloves come off. Cynthia is the first to throw the alignment off.  She gets promoted into management.  It seems no one ever gets promoted from the floor to management, but she does, and in her breaking of that barrier, the loyalties crumble. Tracey, who at first doesn’t believe in setting sights beyond the generational worker role norm, tries and then fails to get the promotion. Instead of being happy for her friend’s success, the distrust of management encroaches and ultimately, the unconscious envy puts a wedge in-between them and their friendship. Tracey has no other way to cope, except to turn on her friend, expressing the idea that she only got the promotion because she’s black. And with that statement, the fire gets lit.

Johanna Day as the ringleader of the disenfranchised, Tracey creates such a complex and thoroughly believable character that it’s difficult to see her as just a terrible person. Her horribleness and culpability is as evident as ever, and her character’s ability to be blind to her hatred is exacting, but her fear is vividly overwhelming, which makes her actions slightly more understandable. This, in essence, is the true beauty of this play. And what many people are saying is why the election was lost. No one heard the complaints of the working class, and even if and when it’s wrapped in racist commentary, to only label these workers as stupid or evil is the best way to fuel their fire and to further alienate the disenfranchised. Nottage succeeds most spectacularly by never treating anyone as a one-sided stereotype. We are given three-dimensional compositions of the desperate and the disappointed in all its shapes and colors. Alison Wright (FX’s “The Americans”), the one and only new member of the transfer delivers one of the more touching stories of regret layered with a resigned understanding of the ‘why’ and the ‘how’ a person can find themselves trapped. This go round, Jessie’s story resonates to a deeper level than I remember from before. I could see it and hear it this time, possibly because my ears were more willing to take it in. Anger, frustration, and self-righteousness have a magnificent ability to clog our senses and make us deaf to what we may need to hear.

The final scene still doesn’t sit well with me though. The mother/son scenes that open Act II take place in 2008 after their sons release are as powerful as ever, just as engaging as the dramatic climax, which still accelerates the heart rate as effectively as before. These angered souls and the wild storm they create still rattle our heads as we watch it expertly spiral out of control. But the very last scene, the closing argument of this exciting new play, still feels a bit heavy handed and the one startling component remains implausible and manipulative. It most definitely packs the emotional punch that is intended, but the composition feels forced. And unnecessary. Maybe in the last moment, less information may have left us more informed and disturbed. Actualizing the outcome made it as easier to distance us from the complexities of racial tension and the disenfranchised. It may have lessened the lesson, and let us off the hook, something that I don’t believe was the intention. Is that what we did to ourselves on the days leading up to the election? My guess is that we didn’t want to see the writing on the wall, using Stan’s own words about their future. It was easier to call it and them, stupid.