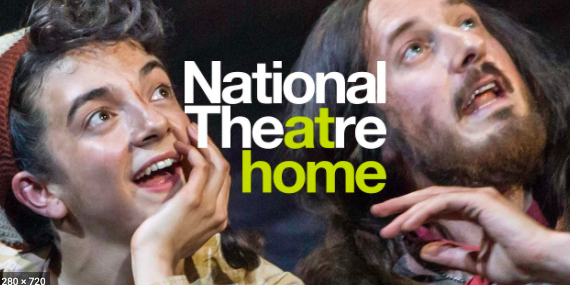 With a turn of the wheel, director Polly Findlay’s miraculous production of Treasure Island that played at the National Theatre in 2014, streaming on their YouTube channel, sets sail on a well-constructed ship with a strong wind behind it. The piece is a thrill and a joy to behold with each transition steeped in theatrical magic and childhood wonderment. Swimming forward into the waves by Robert Louis Stevenson’s young central character, Jim Hawkins, the tale unfolds with clever unique charm, revolving out the unique creations with charm. Jim is wisely transformed by adapting playwright Bryony Lavery into an astonishingly wonderful thrill-seeking, “smart as paint” girl, beautifully embodied by the remarkable and very game Patsy Ferran (Broadway’s 2020 revival of Who’s Afraid of Virginia Woolf). Stating with upright clarity that “girls need adventures too, Mrs. Hawkins”, Jim lives and works alongside her grandmother (Gillian Hanna) in her Inn after the untimely death of her parents, waiting for something new to blow in. The tide turns as swiftly as that stage does, pulling her out of her dull and uneventful life into something quite exceptional in a flash.

A sailor by the name of Billy Bones, menacingly played by Aidan Kelly, steps in, bringing conflict and commotion when he sets down his pirate’s trunk for lodging. He speaks to the young child, “Be you boy, or be you girl?” “That be my business.” about a one-legged pirate who might make a terrorizing appearance anytime soon, and he does come, but not when expected. It takes some time to get to the ship and to the timely entrance of the dreaded pirate, Captain Long John Silver, played magnificently by the engaging Arthur Darvill (Donmar’s Sweet Charity), but it’s worth the wait. Darvill gives Silver a seductive compelling edge that works its magic on almost everyone who comes along, including us. We know almost instantly that he is the one we have been warned about, but, like the impressionable Jim, we also want to join in his twinkle and risk it all for his charismatic attention. We dive into the deceptive waters with glee, like a kid reading an adventurous comic book in the safety of our warm bed, and hold our breath to see what comes next.

Watching with amazement as the set transforms magnificently before our very eyes, we are amazed by every turn.  We knew the moment would come, as we gaze most admirably at the huge curved ribs, waiting with anticipation for the living and breathing structure to rise up magnificently from the revolving stage and create magic. Thanks to the impeccably designed ship by Lizzie Clachan (Young Vic/Park Ave Armory’s Yerma), it finally does, blowing us all away with its size and magnitude. It truly is one of the stars of the adaptation, massively unraveling its sails and swinging rope ladders to the stars for us to climb about like pirates and sailors at war. Lit with the warm glow of fire and sun by lighting designer Bruno Poet (Broadway’s Tina: The Tina Turner Musical), the schooner’s deck elevates up, complete with a steering wheel, revealing magnificently detailed cabins and a ship-shape kitchen galley down below for our consumption.

Once the voyage is finally and fully on its way, the mystery of the starry night sky is unleashed. Lead by the charismatic and seductive Long John Silver, the kindest of nightmares, he pulls in the wide-eyed Hawkins with a semi-parental lesson in life and voyage.  Magically lighting up the Olivier stage’s ceiling, the sparkling constellations and their guidance feed the hungry youngster with fatherly ease. Connecting the two with an understanding nod to adventure, the compelling psychological layer to the treasure-mapped excitement deepens. The bonding of Hawkins to Long John as he nimbly comprehends the young Jim’s paternal need sets the stage for conflict. Clambering up the rope ladders, she starts to understand the deceptive nature of Silver, almost forcing the story of the treasure to take the back seat to the stronger attachment tale that tugs at the heart-strings with a strong compassion.

“I so love a storm!” The wooden stage structure, much like Darvill’s Silver, continues to unveil layers upon layers below in the form of dark and dangerous underground caverns and mud tunnels as the characters arrive onto the dynamic Treasure Island. The dimwitted Squire Trelawny, played wisely by Nick Fletcher (2017’s “The Wife”), constantly amazes in his utter stupidity as he continually does exactly what the wise and straight-forward Dr. Livesey, forcibly played by Alexandra Maher (2015’s “London Road“), knowingly states. You have a loose mouth, she tells him, and he must try hard to keep any knowledge of the treasure map and its whereabouts secret. Mutiny is obviously on its way, and the wily crew played strongly by this ship-shape cast of acting pros, stands by waiting for the sign to rise up. The reveals and engagement fire strong with fun and pirate chatter, lead by a parrot who steals the spotlight more often than naught. The battle has begun with a bang and a climb, and we can’t help but be as excited as school children at story-book time.

“My story is told” down in the underground caves that reveal a playground and salvation for them all against the bloodthirsty pirates, including the muddy, mentally shipwrecked Ben Gunn, played gloriously by the wonderful Joshua James. He is a whisp of a man, wise like Jim, who has been left on the island to rot and die by the same pirates leading this new treasured adventure. But he finds enough clarity and vision to help bring awareness and inventiveness to the struggling lot. They must find a way to defeat that one-legged nightmare, utilizing a ghostly plan to save them all. He argues with himself as if he is the muddy relative to Gollum, but in the end, he triumphs. The inventive character gives a layer of originality to the story, alongside another, Tim Samuels’s marvelously bland Grey, a sailor so colorless that no one ever remembers he is there, thankfully, as we soon discover, he is one of the things that help turn the tide.

The story moves as surely and forcibly as soon as the Hispaniola set sails for the island. The music and songs by Dan Jones and John Tams’ lovely folk music add to the adventure and the charm of the voyage, creaking the deck as the ship bounces through the waves. Lizzie Clachan’s costumes do the trick by adding place and pleasure to the treasure trove adventure we are on. They all help find play and fun within the classic tale with a few well-formed twists, particularly the talking parrot wonderfully voiced by Fletcher. Lavery’s wisely written adaptation lights up Robert Louis Stevenson’s compellingly fun story as the massive amazing curved ribs shape our view as if through a fish-eye lens. The ship has a life and heart of its own, letting us breathe into its lungs and inner cavities with an exciting sense of exploration. It’s a childhood dream, this Treasure Island and going on an adventure like Jim’s, we happily dive into the choppy waters alongside the miraculously talented Patsy Ferran. Between her performance and the wooden shape-shifting set, the treasure hunting tale is as alive as can be, and on a self-isolated Sunday night, it’s exactly what the Dr. ordered.

National Theatre at Home is a new initiative from the National Theatre that provides access to content online to serve audiences in their homes. Audiences around the world can stream NT Live productions for free via YouTube. The first week was One Man, Two Guvnors, and last week was Charlotte Brontë’s Jane Eyre. This week, starting on Thursday, April 16, they’re showing the production of Bryony Lavery’s adaptation of Robert Louis Stevenson’s Treasure Island for one week only. Running Time: 1 hour and 50 minutes, including a short interval. If you can, please donate to the National Theatre, they, and all theatre companies worldwide need our help.
https://youtu.be/9wuCkgL_44s