The Closing of Hedwig

The Closing of Hedwig.

So Hedwig has announced its final performance September 13th. And I’ll be sad to see it go. For the second time. It was a show that not only did I love, but it felt like a wee bit of NYC theatre history for me. Nostalgia, I guess you could say.

Back in 1998, I went to see this show with a good friend on a fun night out in December. It was one of those wonderful New York City nights that I will always cherish. Dinner, Theatre, followed by champagne at a Christmas party. Little did I know, that this show was going to blow our minds that night! I knew little about the show when I got tickets. I believe it was based on a bit of word of mouth and not much more. I hadn’t become the theatre junkie that I am today, I couldn’t afford to be, but I still loved that feeling of being in a theatre when the lights dim, and we know we are about to see something that is precious in its singularity. Regardless of how well a performance is structured, it is always and will forever be a unique moment in time, much like the uniqueness of a snowflake. Not one performance is like another.

The show began, and out came John Cameron Mitchell as the genderqueer rock star, Hedwig, in that fantastic outfit with the extended American flag wings, singing ‘Tear Me Down’ and strutting around like a kind of rock star that I’ve only seen once before, Freddie Mercury of Queen live in concert in Toronto at the ripe old age of 16. Mitchell’s performance blew me away and knocked me out of my seat. I feel in love with this internationally ignored song stylist, Hedwig. As well as her assistant, back-up singer and husband, Yitzhak, a former Jewish drag queen from Zagreb.  And that band, The Angry Inch.

This infusion of androgynous 1970s David Bowie glam rock and echoes of early punk personified in the likes of Lou Reed and Iggy Pop shot through me like a bolt thrown from the fists of angry gods and caused my heart to race. The brilliant emotional songs ‘Midnight Radio’, ‘The Long Grift’, and ‘Wicked Little Town’ pulled me in emotionally so completely that I was helplessly addicted.  ‘The Origins of Love’ (based on Aristophanes’ speech in Plato’s Symposium), by far my most favorite, filled me with wonder at its poetic concept of love and attraction.  Are we always searching for our other half, the half that was split off so long ago by those same angry gods? Is this what we spend our lifetime looking for? Our other half? I left that theatre so deliciously fulfilled; I wanted to thank JCM and Stephen Trask personally for giving me that feast. 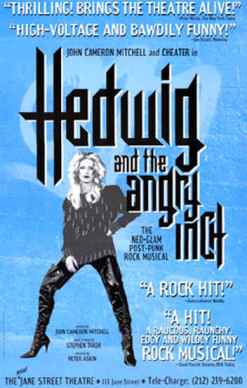 And so, I would return to see this show (at least) two more times in that decrepit and perfectly rundown theatre/Rock bar at the Jane Street Hotel. I happily crossed that ramshackle lobby to see JCM, the incomparable Michael Cerveris, and one other.  I’m not sure who it was. Donovan Leitch, Kevin Cahoon, Asa Somers, and Matt McGrath?  All of who were fortunate enough to put that beautifully coiffed blond wig on, but I’m pretty certain I didn’t see Ally Sheedy, when she surprisingly was cast as Hedwig. I must admit I wasn’t sure if I wanted to see that. No offense to Ally, but when we love something like this, I think we get a bit protective of the product.  To hear it done, in our minds, wrongly, feels like it might damage our memory of it. (Am I speaking to you, Taye? I’m not sure) so I’m protective. Sue me.

The Jane Street Theatre circa 1998 was, by far, not the cool fashionable hot spot that it is today. But it was exactly the kind of place Hedwig would play and tell his side of the tragic story of the life of this slip of a girlyboy, Hansel growing up in East Berlin, a botched operation and an even more botched marriage to an army man, Luther. Now a woman, she tries in the USA to survive, creating the glamorous Hedwig, starts a rock band, and meets her possible other half, Tommy Speck, who later Hedwig refashions into Tommy Gnoses, and with Hedwig’s help and her songs, he becomes a rock star, leaving Hedwig behind. 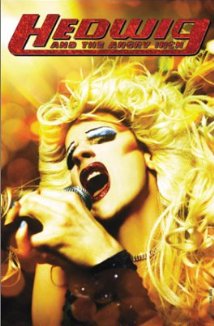 This is too simple of an explanation of Hedwig, but it will suffice. It touched my heart and my soul, and I was sad when it closed in 2000. It was one of those shows I would gladly have see over and over again, dragging friends and out of town visitors to see when I had the chance. Those kinds of shows are few and far between.

And then along came Neil Patrick Harris and the announcement that Hedwig was coming to the Belasco Theatre on Broadway in 2014. Was this his idea? His dream to put on that exaggerated blond wig and rock our world? How was that going to work? Would they pretend to be in a run down club? How would that wig sit on the head of Neil Patrick Harris? I had so many questions. I was nervous as one is with something they cherish (I’m the same with the upcoming Spring Awakening, but that’s another story), but I was also excited.  Could he pull this off?

Did he ever. Harris was phenomenal. Much deserving of that Tony Award. As was Lena Hall in the beautiful sidekick role of Yitzhak. They, and the incredibly talented band, pulled if off. Big time. And once again, I could experience that special show over and over again. I saw NPH twice and when JCM came back to reprise that role he created, how could I not see him again? And even physically damaged, he was magnificent, funny, and powerful.

And all the strange rock and rollers

You know you’re doing all right

So hold on to each other

You gotta hold on tonight.

Good night and good luck, Hedwig.  I will miss you.

(Although I hear you’re opening in London again…..and I always love a good reason to fly to London)