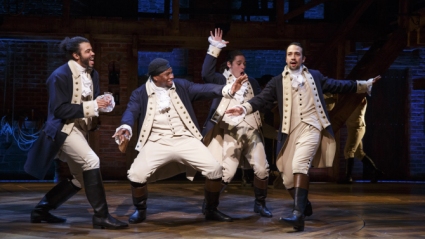 What in the world can one say or write that has not already been said about Hamilton- an American Musical that opened last August.  Yes folks, I finally had the opportunity to see this new musical that has taken Broadway by storm. Sure to take home buckets of Tonys this spring (I will guess 6?). We bought our tickets way back last year; I believe the day before it opened. Wanting to get good seats on a Thursday night, we searched and searched dates until we finally found four great seats in the second row center of the front mezzanine on February 4th, 2016.  A long way off. I am a very patient person, generally speaking, but I was itching to see this show from the day I first heard about it at the Public. Why I didn’t have tickets for it when it premiered at the Public, I’m not quite sure.  I must admit that I was one of the few that was not blown away by In The Heights, but this show did intrigue me from the moment I heard about the historical subject matter and the stylistic musical ideas swirling around it. 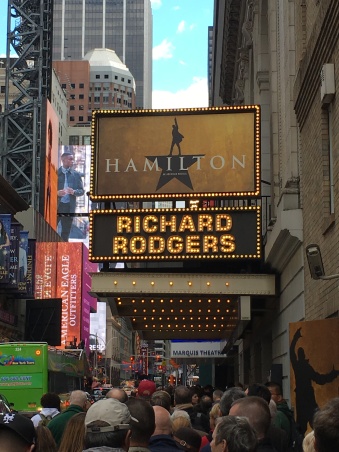 So being the slightly impatient theatregoer that I guess I must admit that I am, I tried to win a $10 lottery ticket numerous times since purchasing our seats. And I have to tell you, it was a bit disheartening (and a little bit exciting) to turn up at the theatre a little more then two hours before the show to find hundreds and hundreds of other hopeful people throwing their names in that lottery bucket.  I was a bit ashamed to stand there amongst the swelling crowd with the internal knowledge that I actually did have a ticket but didn’t want to wait until February to get my first view of this show.  I did not tell anyone at the theatre as we stood and prayed and crossed our fingers (slightly hard to do with winter gloves on…just saying) out of a bit of shame and guilt. I never did win, but I was glad for those squealing fans who did win; those who got their chance to witness this phenomenon (and I am going to willingly believe that each and every one of them had a/not seen it yet, b/did not own a ticket for a future date like me, c/could only afford the $10 ticket price for the front row seat they just won, and d/were basically living saints, who were finally getting some payback for all the good they had done in their lives so far).

So now it’s February, and I ask myself, “what can I say about this show that has had so much written about it from the theatre press and beyond?” 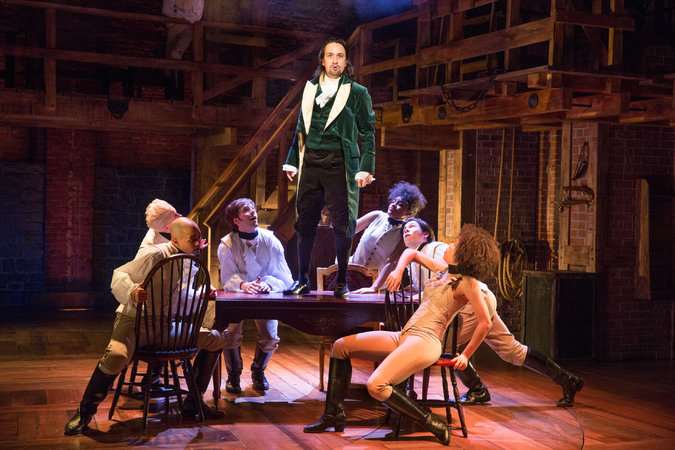 I proclaim, quite gladly, that I was intoxicated by Lin-Manuel Miranda’s Hamilton – An American Musical, exquisitely directed by Thomas Kail. The show has such a drive and a passion for its subject, and for history itself. It has an energy, a beat, a rhythm, and a rebelliousness that swept me up and kept me thoroughly engaged and enchanted. It’s a powerhouse three hour telling of this pushy historical figure, Alexander Hamilton (played by the uber-talented Miranda) and the rebels that he ran around with and that ran around him.

This story of America’s founding fathers – Hamilton, George Washington (an astounding and very handsome Christopher Jackson), Thomas Jefferson (sadly, I don’t think i had the pleasure to see the much talked about Daveed Diggs – but Seth Stewart in this role, and also the role of Marquis De Lafayette, the night I saw it, was absolutely wonderful), & James Madison (Okieriete Onaodowan) – is really about a wild and driven bunch of rebels trying to change the world they live in, much like Miranda himself has done to Broadway musical theatre. Using the musical forms of rap, hip-hop, and R&B ballads, he pushes the history lesson forward with a power that is invigorating. It’s a musical theatre revolution in it’s own right by using these non-traditional musical forms that feel at odds with the subject and historical time period, but also perfectly in tune with the minds and hearts of the people of the revolution. The ethnically diverse cast is extremely well suited and totally believable in the telling of this high-energy slice of American history; it’s like attending the most thrilling history lecture by a fast talking caffeinated professor and a whole bunch of excited assistants. For some, the first few scenes are almost too fast and too much information, but I found myself treating the beginning in the same way that I go into Shakespeare.  I let the first few scenes wash over me and try not to get too caught up in the details and each word being rapped to/at us at a feverish pace; to hold onto the faith that the main details of this story will be retained. And they were. 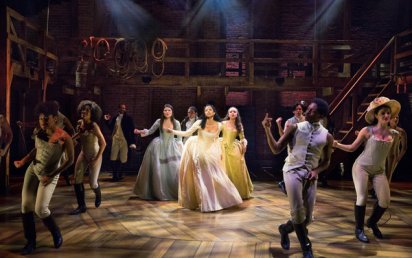 Watching this show was like driving on a highway in a wonderfully powerful sports car, fast and furious, but every once and a while, you have to slow down to drive through a picturesque town, and take in the scenery and the moment.  Giving us the historical facts, Miranda speeds us through time, but then slows down enough to set up romantic entanglements and emotional moments with ballads and R&B classically crafted songs, like the wonderful ‘The Schuyler Sisters’ sung by the breathtaking trio of Phillipa Soo (Eliza, his wife), Renee Elise Goldsberry (Angelica), and Jasmine Cephas Jones (Peggy).  It seems whenever we are given the moment to explore the developing triangular love and sexual life of Hamilton, the musical slows us down,  we pause in the timeline, and we are given gifts like ‘Helpless’ and “Satisfied’. I also loved the sensual sound of Jasmine Cephas Jones’s voice in the role of Maria Reynolds, the married woman who seduces Hamilton and almost brings the famous man down. 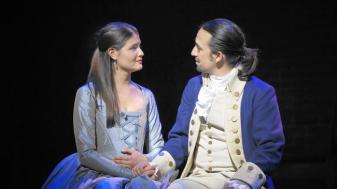 Although Hamilton the Musical is centered on the lead character’s rise from poor orphan to power and fame, for me, the real center of the show seems to be the man who brings down Hamilton. Aaron Burr, beautifully played by Leslie Odom Jr. has a stellar voice and stage presence, especially in his rousing number ‘The Room Where it Happens’. He is a force, and for me, he is really the star of the show, or at least the dramatic core. 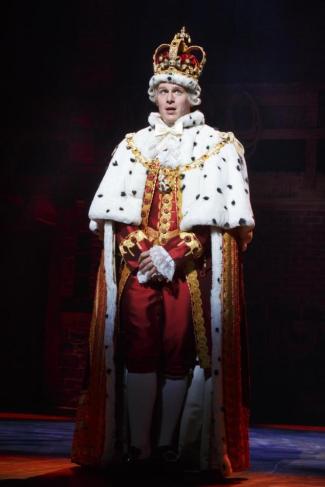 It would also be criminal to write about Hamilton and not mention Jonathan Groff’s hilarious performance as King George III. He is a Broadway genius, from the moment he makes his grand entrance, and performs his neo-British pop number, ‘You’ll Be Back’ and every other time he sets foot on the stage.  I think I counted four times.  What a great gig/gift he has been given. Four numbers on stage, perfectly written songs and moments, and he kills it each and every time.  I couldn’t get enough.  (OK, I’ll stop gushing now, Jonathan.)

Beyond that, the rest of the cast is exceptional, singing these intense and incredibly well written songs, melting and blending historical references with modern language, altering style, and slang. Visually, the show is sublime.  The set design by David Korins is perfect, and the space is utilized amazingly well by the exciting (sure to be nominated) choreography of Andy Blankenbuehler. It’s a marvel to take in visually, enhanced by the amazing projections and lighting of Howell Binkley.  Simply breathtaking. 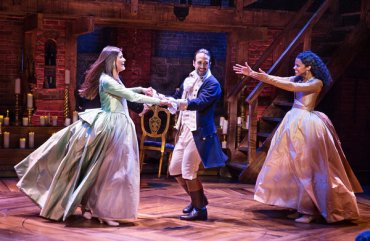 Act One is an adrenaline fueled history lesson in politics, war, revolution and love but Act Two is the clincher, which gives this show its emotional core and depth.  It is truly amazing what Miranda has done here.  He has made these stiff dull men leap out of the history books and captivate us on every level.  He has made history exciting, lively, and energetic.  And it is exhilarating, especially when I see the crowd take it all in, and leave wanting more. 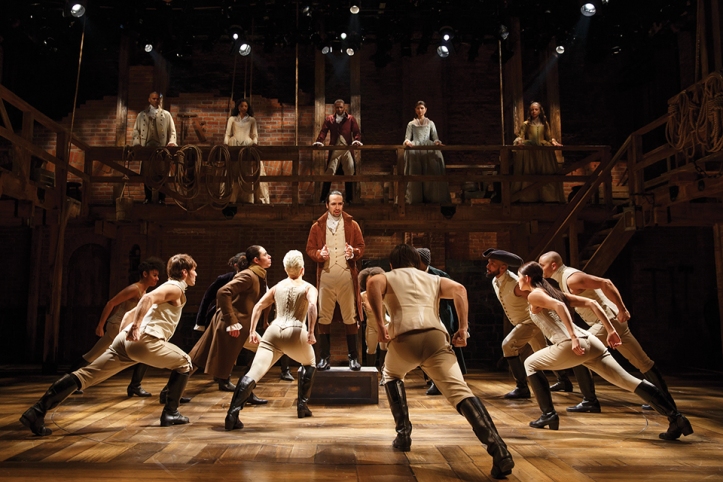