Putting on Old Hats
@Signature Theatre
by Ross
I had heard about Old Hats when it first opened in 2013, and their other jesting sketch show incarnation, Fool Moon in 1993 (and its many remounts and tour), and being a fan of Bill Irwin (magnificent and Tony winning in Who’s Afraid of Virginia Wolfe with Kathleen Turner in 2005), I was mildly curious about the show. The main word is mildly. I had an idea what a show based on the centuries old tradition of clowning would look like, but a very vague one. And I wasn’t all that surprised with Old Hats when I recently saw it at the Signature Theatre.

It’s a pleasant enough experience and one that felt like a bit warm and cozy blanket on a chilly night. The two actors, Bill Irwin and David Shiner, obviously love the art form of vaudevillian clowning that has a long theatrical history.  But I don’t know if I am or ever will be the type of theatre goer that this kind of show is aimed at or would appeal to. There was a inner wish that there was an overall narrative rather then just separate skits based on classic clown characters such as the sad hobo or the rival entertainers. These two obvious pros did integrate modern projections and techno devices to modernize a classic form, and are generally successful with that, as seen in a beautifully choreographed iPad skit. Also, a few of these acts were quite charming like the one that got these two silent jesters to use their vocals singing and also joining the band playing instruments. One in particular, the filming of a silent western, was a whole lot of fun, while others like the arguing politicians left me a bit bored. 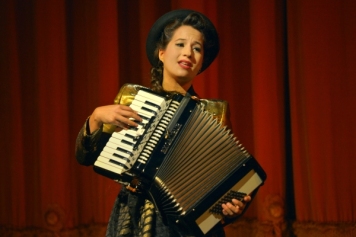 One highlight of the evening for me was a complete unexpected surprise. I had no idea that there would be original song interludes. The lively and wonderful band, lead by the adorably quirky singer,  Shaina Taub, was an absolutely charming addition to the program. From the moment they arrived, with such a fun and funny entrance, I was enchanted by them and their magical and unique story telling songs all written and arranged by Taub. Expertly performed by Mike Brun (Bass/Cornet/Ukulele/Piano), Mike Dobson (Percussion/Foley Artist), Aaron Johnson (Sax/Clarinet) and Hiroyuki Matsuura (Drums), they cast a much needed bit of energy and uniqueness over the night, and I started to look forward to their acts with a bit more glee then the clowning acts. (Sidenote: Just saw Alice Ripley/Emily Skinner – Unattached at Feinstein’s/54 Below last night, and I was once again charmed by the Shaina Taub song, ‘The Reminder Song’ sung by these two magnificent women.)
https://youtu.be/1DFrJGznylY 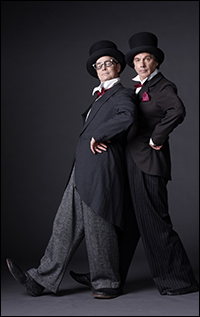 All in all, it was an entertaining evening, a bit on the soft smile side of the spectrum of enjoyment, but amusing none the less. Bill Irwin did crack me up as the magician’s big haired lovely assistant/jealous girlfriend in a skit that I must say stretched on a bit too long past the punchline. This is probably what I thought of most of the skits to be frank. Would I return to Old Hats or Fool Moon, if and when the show gets remounted? Probably not. I will say that the crowd adored these too but I’m thinking that Clowning just isn’t my cup of tea. I like my theatre with a bit more drive and a lot more engaging and engrossing storytelling. And definitely with smaller shoes.
https://youtu.be/qvAi0T1PS8A