Crackskull Row: Ghosts and Guilt for Masher, Rasher, and Basher. 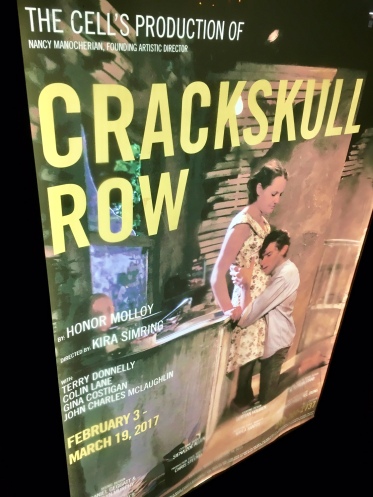 Crackskull Row: Ghosts and Guilt for Masher, Rasher, and Basher.

By Ross
I’ve never been to the Irish Repertory Theatre before, so I was excited to see what was going on there, and to discover what The Cell was presenting. And I’ve never heard of Crackskull Row by the famed playwright, Honor Molloy, but I had lots of ideas what it would be all about, and I wasn’t disappointed. I love the other Irish playwrights, Conor McPherson (The Weir), Brian Friel (Faith Healer) and Martin McDonagh (The Beauty Queen of Leenane). Within their plays resides that beautiful lyrical language delivered with a melodic Irish brogue full of slang and snarl. It’s rough and hard, while also being musical. Usually it’s coupled with a drunken screwed-up family dynamic spinning wildly out, usually centered around the head of the household. Present or deserted. And a location that floats somewhere between atmospheric and decrepit (a fantastically moody and functional design- set: Daniel Geggatt; costume: Siena Zoe Allen; lighting: Gertjan Houben). All are present in Crackskull Row, but what I didn’t expect is the heightened Greek tragedy that is being playing out here at the W. Scott McLucas Studio Theatre. Under Kira Simring’s lyrical direction, there is a very Oedipal twang and structure with an hint of the classic, Desire Under the Elms thrown in for good measure. It’s an Irish tale filled with insanity and ghosts, guilt and lust, drunkenness and manipulation, and some good old-fashioned violence. Naturally.
Molloy plays with flashbacks and memories that start with a stellar performance by Colin Lane as a jailed man looking through the prison bars back into his past. His opening monologue rings true and dark. Thirty two years ago, this man was a teenage boy named Rasher, living on Crackskull Row with his wild go-go dancer mother, Masher Moorigan, barely surviving without much help from his drunken musician father, Basher (also played exceptionally well by Lane). We journey back with this angry man to explore his home and his family dysfunction to bare witness to what brought him to that cell so many years ago. But first, before heading back in time, we check in on his mother, the disheveled Masher, still living in the same house on that same road. She is now an old half-mad woman, played effectively by Terry Donnelly. We can see the reminiscence of the cavalier wild thing that used to be inside even after all these years of solitude and distress. Masher is visited by what first appears to be a daughter who has come by to give some level of care, but as we move through this engaging scene, it appears the young woman is something quite else. Something that floats in through the fireplace to remind her of her role in what happened so many years ago.
There is tremendous guilt and shame in the mother’s memory of what transpired in that home. Back when Masher was younger and prettier, and going by the nickname of Dolly (a very fiery Gina Costigan does a great job playing the younger Masher),  she eked out a miserable existence using her body as her and her son’s meal ticket. Maybe because of desperation and a perverse need for affection, the son, the young Rash (played with earnestness by John Charles McLaughlin)  and the mother turn towards each other, clinging to one another for some reassurance and security. Lust, jealousy, and rage rise up in the young man when he finally is pushed into the role of protector by his mother. That one fatal night, when the drunken patriarch returns home with a found object, a sword he has salvaged from a destroyed iconic monument, Nelson’s Pillar, all the family’s secrets are revealed, and manipulation turns into violence. And blood is spilt.
This is a bleak and dark exploration of jealousy, rage, and maternal manipulation. Or is it of passion and love of the desperate? The story is one that keeps leaping back and forth as both mother and grown son have to come to terms with what happened that night. There is one oddly performed scene involving an ESB utility man (clownishly played by the same actor as the son) and the elderly Masher that pulled me out from this compelling tale of woe, but it wasn’t long before I was drawn back into the incestuous desires and the murderous rage of adolescent passion.
If only there had been less guilt and ghosts on Crackskull Row, and more of Mrs. Lovett’s ingenuity from the Barrow Street Theatre’s Sweeney Todd, all would have turned out quite differently, but that’s not how the Irish roll. ‘Seems an awful shame’ Mrs. Lovett would say. But these Irish roll harder and deeper, just like Molloy’s fellow national playwrights, McPherson, Friel, and McDonagh.  Now that’s a fine group of writers to get lumped in together with, don’t you think?