Animal: Really, You Want to Talk About The Hat?? 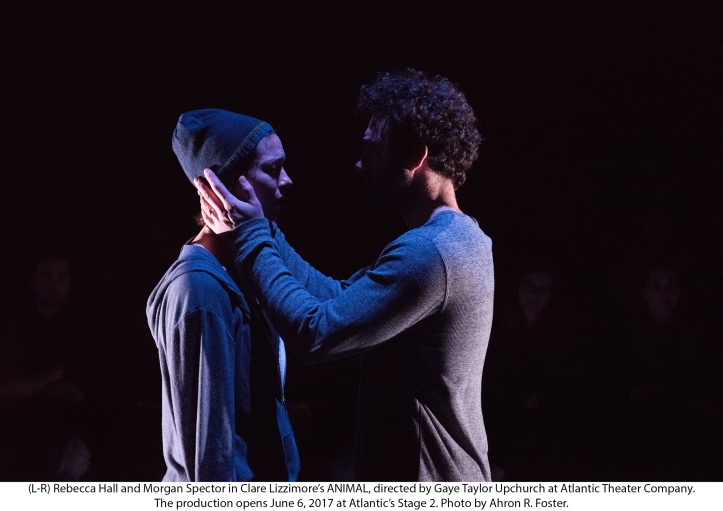 Animal: Really, You Want to Talk About The Hat??

Rebecca Hall is one of those actors that fascinates.  Her work is surprising in its depth and intricacy, while igniting an unfathomable intimacy with her audience.  Sometimes, she mystifies and keeps us at arms length, as she did in HBO/BBC’s “Parade’s End“, but when she invites her audience into her inner soul, as she has done in the films, The Town or Vicky Cristina Barcelona, she is gloriously complex and exacting.  As directed by Gaye Taylor Upchurch (ATC’s Harper Regan), Hall, partnered with her real life husband, the wonderful Morgan Spector (Arthur Miller’s A View From the Bridge) playing her onstage husband, pulls us deep inside the mind of Rachel, a woman who is suffering from some mental complexity.  Clare Lizzimore’s play, Animal, is an unflinching look inside the mind of, what was once, a functioning human, now crippled with some sort of depression or anxiety condition. What exactly is going on inside her is part of the puzzle, one that we will spend the next 90 minutes trying to unpack.

Struggling against some dark stormy cloud that hangs overhead is what Hall is most effective at in Animal.  Her inner tremors and emotional complexities can be felt reverberating throughout the intimate and sparse acting corridor that was created with a strong unhappy emptiness by set designer, Rachel Hauck (Public’s Tiny Beautiful Things, Latin History for Morons) and lighting designer, Bradley King (Tony nominated for Broadway’s Natasha, Pierre, & The Great Comet of 1812). We get the sense of being trapped inside the grey matter of Rachel’s toxic mind in this present moment, but also in her romanticized memory of a time when things were not so bleak.  Spector’s Tom is solidly real as the man who has to react and respond to the outrageousness that is erupting from the woman he loves. He is both protector and attacker, as anyone might be when dealing with the erratic nature of the depressed and paranoid. Her relationship to her husband seems to be the one that resonates the most within her tattered mind, and the vision of him, materialized before her is both agonizing and unsettling for her to attend to, and for us to witness.  The use of microphones, recorded dialogue and sound by Stowe Nelson (Playwrights Realm’s The Wolves), along side the original music by Daniel Kluger (Second Stage’s Man from Nebraska), accentuate that feeling of crawling and clawing our way through Rachel’s worse thoughts, and her most loving ones as well.

This inner journey is something that her therapist, Stephen, played with a brittle warmth by Greg Keller (Richard Greenberg’s Our Mother’s Brief Affair), would greatly aspire to.  Their relationship, engaging at moments, is mostly a combative dance, layered with power dynamics and silences.  At first, being a psychotherapist in my real life outside of this blog, the interactions pained me to watch. Once again, a therapist being written in a way that I hope never actually exists off the theatrical stage. This is not how I like my profession being presented, but then I started to wonder, is this really what is happening between the psychiatrist and the patient? Or are we merely seeing the dynamics through Rachel’s warped eyes.  Perception, through the haze of a paranoid or depressed mind, is a whole different scenario, one that, sadly, can cause a person to see her therapist as the enemy/savior shrouded in mistrust and desperation. And we are witnessing him through that veil.

It’s hard to know what is real in this finely crafted story.  There’s the disturbingly needy invalid and mother-in-law, played with precision by Kristin Griffith (ATC’s Jody’s Mother), the charming home invader, played with a strongly sexual and erotic presence by the handsome David Pegram (LCT’s War Horse), and a young girl in a private school outfit, played solidly by Fina Strazza (Broadway’s Matilde the Musical) that briefly pops up and unsettles the already unhinged Rachel. Costume designer, Sarah J. Holden (Roundabout’s The Price) does a wonderful job creating uniforms for these characters so that they may be portrayed as precisely as they are seen by Rachel, while also adding layers of unknown reality upon them.

What is to be believed in Rachel’s ever increasingly intense whirl wind is always in the back of our minds.  She is like a caged Animal, stalking around the small confined space that we see before us within her self-created or perceived enclosure. A space that seems to heighten her compulsively aggressive instincts.  The play spins forward. We are holding our breath, waiting for some sort of pay-off for the excruciated discomfort of watching this woman self-destruct and destroy all around her.  The climax eventually comes, crashing in all around her in a moment of eye opening clarity, but is it too slight or easy a pill to take? We are meant to see all the complexities explained, and in a way it does., but for me, the therapist isn’t let off the hook as easily.  His explanation feels condescending and simplistic, and the mind and someone’s psychoses is never so trite.  I still wanted to fire the therapist, run from his office, while still desperately wanting to embrace the depressed and her enabler.