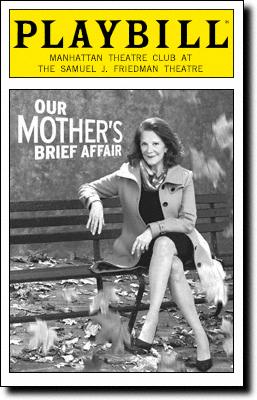 Linda Lavin’s Tall Tale of One Brief Affair
at the Samuel J. Friedman Theater @MTC_NYC
By Ross
Linda Lavin is the main reason I found myself at MTC’s Friedman Theater to see Our Mother’s Brief Affair written by the incomparable Richard Greenberg (The Assembled Parties, Take Me Out). Tony Award winning Lavin is a force to be reckoned with with her intricate portrayal of Anna.  She manages to make such a deep impact as a Jewish mother on her (latest, but not last) deathbed moments engaging and doing some story-telling with her two grown children. She wants to tell them the story of her brief affair with a man who turns out to have made quite a name for himself (infamous one may say).  She is an enchanting story-teller, who, despite her tendency to make the most wonderful faces (and this is the craziest part and maybe the genius of Lavin herself), her characterization doesn’t come off as a superficial portrayal but one that is more real, funny, and believable then we would think possible.

I only wish the story was either more compelling or better told in the play’s direction, use of space and stage, and in Greenberg’s writing. The story has all the ingredients of a captivating one, but it feels messy and flat.
There is an odd use of space as Anna and the others tell her tale, showing us some of it, and describing other parts of it, in great detail. The director, Lynne Meadow, and the designer, Santo Loquasto, have decided to confine the story to small areas at the front of this big beautiful stage, a bench and a chair. It feels like the production is wasting the stage’s vastness and keeping the actors up close to the edge of the stage, as if the story would then become more interesting and intimate.  I don’t think it does the trick.  For instance, why is she sitting in a living room chair pulling a blanket over herself, when she is supposed to be in a hospital bed, almost at death’s door? It seems more amateurish, old fashioned, rather then stylistic. 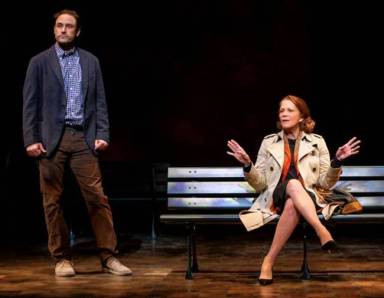 Talking to us directly, off and on, the children, Greg Keller (wonderful in this sweet role) as the son, Seth, and in a less well written part, Kate Arrington as the daughter, Abby, are sometimes asked to describe things that they weren’t even witness to, oddly enough making the story less interesting, less connecting, and more dull. The secrets that are told, or questioned by them become less important, shocking, and more mundane. The actors do there damnedest to draw us in and almost succeed (I thought Arrington was wonderful in her thankless role) but the writing style seemed a bit too poetic and not grounded in reality. John Procaccino as the ‘historically significant’ lover, trying desperately to be compelling, just comes off as not interesting enough to be seen as so monumental. He also has the joyless task of portraying Abe, Anna’s angry husband, in a one-note monologue which added very little to the whole affair.
This is a play to watch a pro at work.  Lavin is wonderful but deserves a story that is stronger, better written, and over all, more intricately constructed.  We want to care about this mother and her children, and take away some deeper meaning of life, love, and living, but nothing stuck, and we are left with a flat story of a short affair, that doesn’t seem to alter anyone’s life, least of all, mine.
https://www.youtube.com/watch?v=chp6UHKx52I
Directed by Lynne Meadow; sets by Santo Loquasto; costumes by Tom Broecker; lighting by Peter Kaczorowski; sound by Fitz Patton; production stage manager, Diane DiVita; general manager, Florie Seery; director of production, Joshua Helman; associate artistic producer, Stephen M. Kaus; line producer, Nicki Hunter. Presented by Manhattan Theater Club, Ms. Meadow, artistic director; Barry Grove, executive producer.
WITH: Linda Lavin (Anna), Kate Arrington (Abby), Greg Keller (Seth) and John Procaccino (Lover/Abe).