By Ross
It isn’t about of who wins, they say, but how you play the game that’s important. This was obviously said not by a tennis player in the semi-finals at the US Open, and definitely neither of the two lead players in Roundabout Theater Company’s The Last Match. Maybe is was spoken by a fellow theater junkie, because in many stylistic ways, this play, at the Laura Pels Theater is very well played indeed. Wonderfully directed by Gaye Taylor Upchurch (Atlantic’s Animal) and designed by set designer, Tim Mackabee (Guards at the Taj), lighting designer, Bradley King (PH’s The Treasurer), costume designer, Monatana Blanco (LCT’s Pipeline), and impeccable sound design by Bray Poor (Public’s Hamlet), the player’s and the production’s technique is as solid as a tennis pro’s. It’s obvious that this production, from the moment we take our seats, is a solid and professional game. And although the overall spectator sport is extremely satisfying, the actual play is not as exhilarating as the players enacting the game.

Anna Ziegler’s The Last Match attempts to take us through, almost moment by moment, the nail-biting match between rival tennis players in the semi-finals at the US Open. The aging golden boy champion, Tim, played with an all American grin and a privileged position as the crowd’s favorite by the perfectly cast, Wilson Bethel (HBO’s ‘Generation Kill‘) is rumored to be retiring from the profession after this Open.  He has been the star player of the tour, and a personal idol to many, including his hungry opponent, Sergei, played wonderfully and explosively by Alex Mickiewicz (RTC’s Thérèse Raquin). The crowd roars for Tim, chanting his name for the most part of the game. We go through the match, with the score boards on each side of the stage keeping track point by point, game by game, and set by set.  With each serve and volley, we creep inside the minds of these two athletes as they both pursue their dreams.  The pressures and the aspirations, the sacrifices and the ambition, are all on miraculous display in and out of the game. Troubling emotional moments result in losing a point or a game. And on the flip side, exhilarating moments result in powerful and winning aggressive play.  We get a rare glimpse inside what it must be like to be in that league, and that close to achieving or losing your dream. 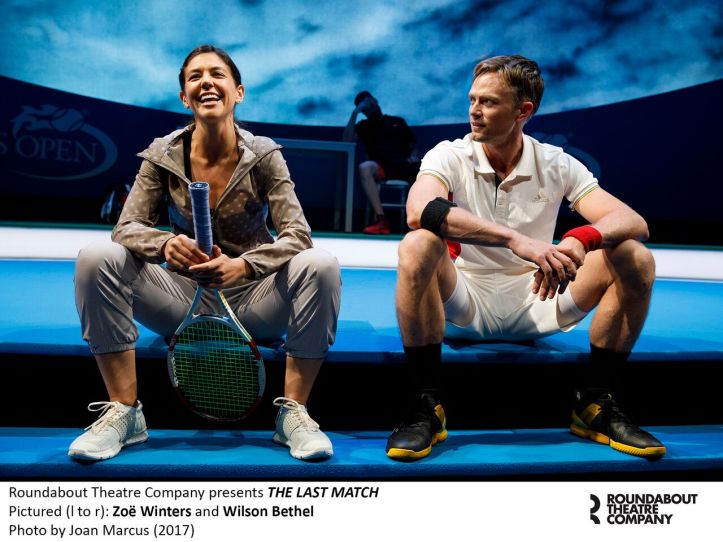 Cheering them on, in their own particular styles is Mallory, wife of Tim, played openly and charmingly by Zoë Winters (LCT’s The Harvest), and Galina, girlfriend of Sergei, played hilariously by the very talented, Natalia Payne (PH’s Me, Myself, & I).  Through impressively woven flash-backs and off the court conversations between the couples, a window into the souls of these four slowly take shape over these five sets played. It’s an impressive feat, and although at many moments it feels not exactly riveting or electric in what is actually being discovered, the shape of their lives is well constructed and meaningful.  You see, “the pressure and the failure and the death and the ambition and the coming up short” is what it is all about, says Tim, and his need to win one last time is as equal to Sergie’s need to start winning when it matters most. 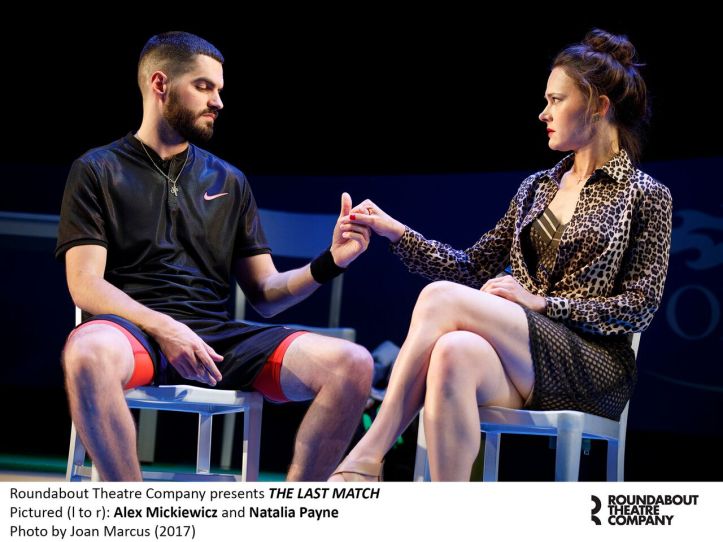 Ziegler’s play, Photography 51 that played last year in London’s West End, starring Nicole Kidman was one of those plays that I sadly missed.  It was a ‘lose’, you could say, as I just missed the chance because of bad timing.  But I hope I make it to her soon to premiere play,  MTC’s Actually as it seems I have missed all her others; Keen Company’s Boy, Playwrights Realm’s A Delicate Ship and The Wanderers coming up at The Old Globe. Her dialogue is strong, clear, and almost poetic within her solid structure. This 95 minute adrenaline laced event is one that I am very glad to have ‘won’ the chance to see.  It’s most beautifully staged, and solidly performed, and while we are in it, the rush of the competitive match engages, and compels us forward. We wonder how this will all turn out in the end. We end up caring for these four and the lives that they are struggling so hard to create and maintain; the golden boy and the former pro tennis player wife versus the much younger rising star from Russia and his powerfully aggressive and clear-headed girlfriend.  It’s a well balanced game, and no matter who wins, the play is worth watching.  But as with most spectator sports, being in that moment of play is gripping, but rarely does the game last in our hearts beyond the event.  The adrenaline fades as fast as it was produced. Here, with The Last Match, the end result is the same. 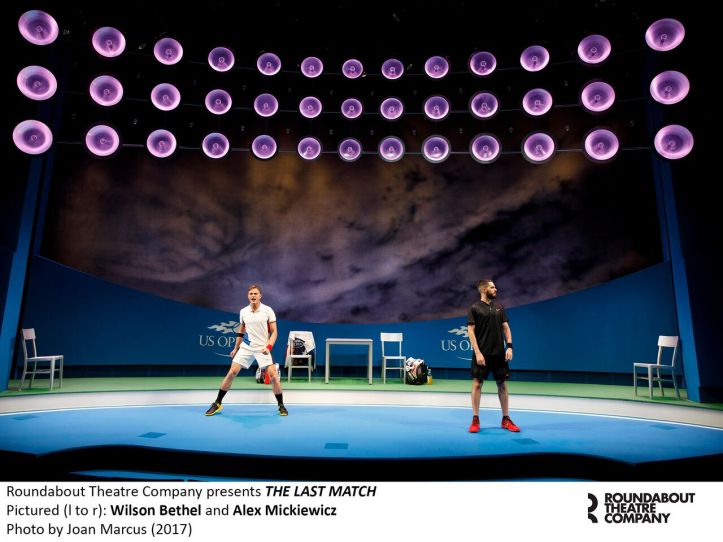