Latin History for Morons: A Return for a Refresher Course 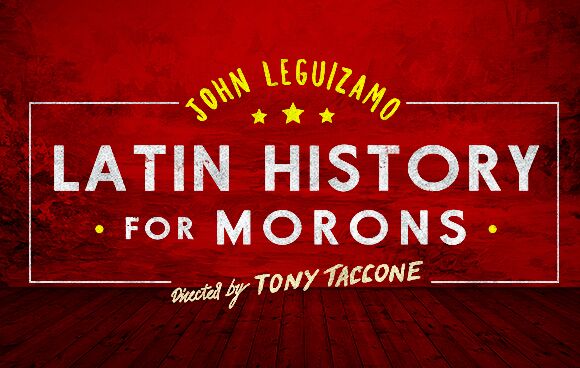 Latin History for Morons: A Return for a Refresher Course

John Leguizamo is at it again. Back on Broadway, giving us all he has to give in his most recent one-man Latin History lesson of a show. It’s a laugh inducing class of performance mastery but this time it is dissected into two different categories.

The first is as expected. He wow’s us with his comic characterizations and high energy Latin beat dance moves, giving us a master class in the art of putting on a personal storytelling show. What it lacks in high conflict resolution it makes up in sweet father/child dynamics. His earlier pieces while being equally hilarious were anchored in more pressing matters of parental disappointment. In this show, it is now he who has to feel that look from his own children and his wife.

This time though, the second added category is a pseudo-high school history lesson administered by a quasi-professor with chalkboard, props, text books, and a whole lot of chalk dust flying through the air. He wants to lecture us on the history of the Latinos. It’s a chapter that the American history books have oddly enough left out and forgotten to teach at school and while preparing his lecture, he must confess his shame that he knows so little about the contributions of his own people. And when he finds himself unable to help his son who is in dire need of a hero, Leguizamo, as writer and solo performer, takes it upon himself to learn about the history of the original Americans; the people who lived here before this land was ‘discovered”. It truly is a lesson not only he or his son needs, but one we all need to hear, and it couldn’t be delivered with such a big dose of heart and humor by anyone else but this incomparable performer. 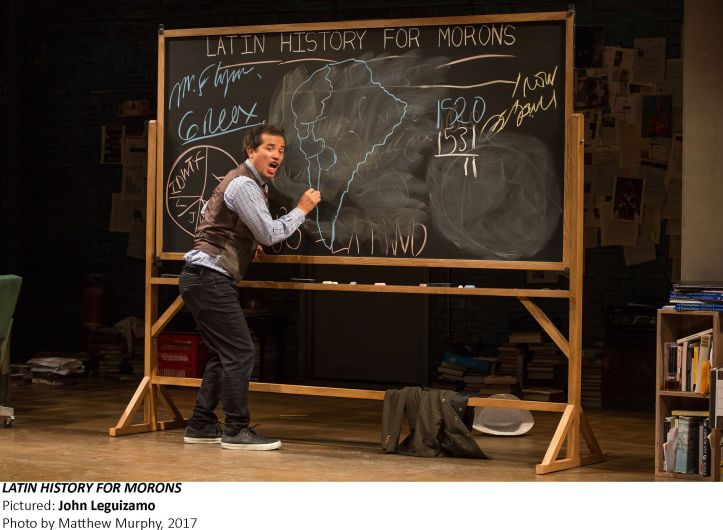 In a classroom designed by Rachel Hauck (set designer: Tiny Beautiful Things), Leguizamo is surrounded by history books and a large school blackboard (lighting design: Alexander V. Nichols). It doesn’t feel as classroom-like as it did at the more intimate Public Theater last year, but how could it on this large and more formal Broadway stage. But Leguizamo does his best to pull us into his classroom and feel connected to this wild professor. It is clear that at this historical moment in our nation, a lesson on the original Americans is more important than ever. 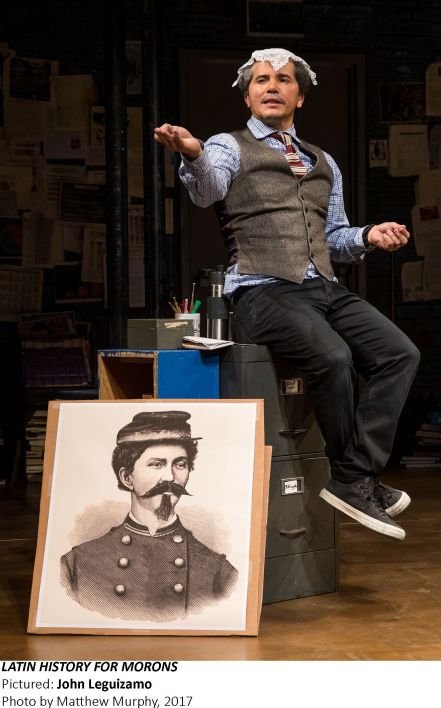 There was a moment of stress the night I saw the show, when voices of outrage and insult started to ring out in the mezzanine, with Leguizamo having to delicately weave in a call to security to head upstairs. It’s not surprising in this time of political division that some might be offended by his rhetoric but this crowd definitely has his Latino back, and amidst the shouts of “SHUT UP!” aimed at the insulted one who felt he had the right to yell out his disagreement with Leguizamo, the stress level rose, but the alignment tightened.

As directed by Tony Taccone (Bridge and Tunnel, Wishful Drinking), the current political scenario luckily and rightfully is obviously not ignored, but commented on here and there with humor and a solid edge of frustration. Some may be angered I suppose, but not likely anyone in his fan base. This wildman history teacher persona crafted by Leguizamo sometimes slides too far off topic, letting the historical details get a bit lost in his typical energetic storytelling. but he rarely lets the important sentiment or the key points travel too far out of focus. Although, in the end, I wondered if I was actually taking in as much as I wanted to learn.

As Leguizamo has done so skillfully in his numerous other one man shows, namely Mambo Mouth (Obie Award and an Outer Critics Award, 1991), Spic-o-rama (Drama Desk Award and four Cable ACE Awards, 1993), Sexaholix… A Love Story (2002), and Ghetto Klown (Outer Critics Circle Award and the Drama Desk Award both for Outstanding Solo Performance, 2011), he always manages to layer meaningful and important discussions on race and intolerance on top of personal heartache. It’s done with a huge dash of humor and heart, sprinkled with Latin music (original music and sound design: Bray Poor) and dance moves, leaving us, and him, a wee bit breathless. He isn’t the young highflying soloist I saw back in 1998 in the Emmy and Tony Award nominated Freak (Drama Desk Award for Outstanding One-Person Show), but he’s no slouch either as he takes over the huge Studio 54 Theatre.

A great commentator and impersonator, although sometimes not so politically correct, he may make some wince or be offended, like the man behind me who I heard muttering about Leguizamo’s comments being ‘racist’, while others, will just laugh. His gay-lisping character made me wince a bit, even though I knew he was going to address his gay brother granting him gay-immunity, something I’m not sure I one hundred percent can  get behind that idea. But he does manage to take us through 3000 years in the Americas possibly and joyfully offending just about everyone in his path. On this wild historical ride, he tries to teach us about the Native Americans, the Taínos, the Incas and the Aztecs, all while trying to help his son gain some power and strength within his own heritage and history.

The core story is both achingly personal and relatable, with varying degrees of warmth and simplicity. Sometimes it feels a tad bit on the light side and unfocused, but the personal drive is always present and highly functional. Quick references that are thrown in here and there from his familial history resonate while also being hilarious. He still has that way about him. He can tell you a quick aside that is both deeply powerful and ridiculously funny, all within the same beat. We get schooled as he tries to school himself so he can help his son find a hero to call his own. 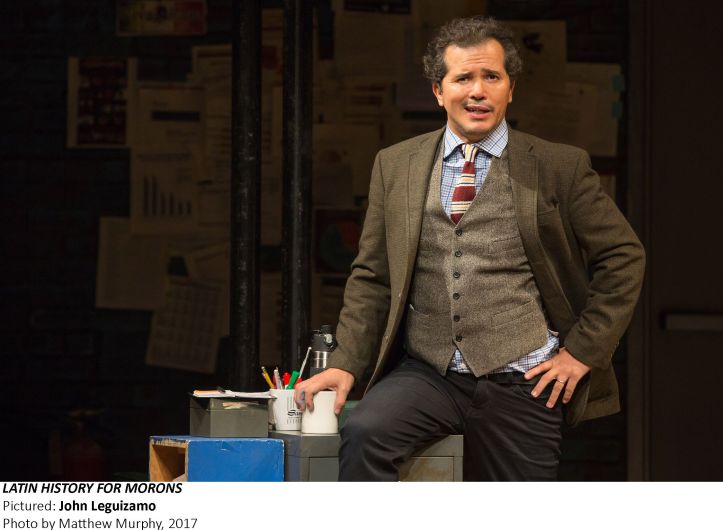 The ending, although not surprising, is very touching and simply sweet. Leguizamo’s edge might be not as sharp as his previous explosive and foul-mouthed explorations of racial tensions in American, but Latin History for Morons is a deeply thoughtful story, told by a father who is trying to grow up while also trying to raise his children better than he himself was. This is what makes America great to be honest, not false claims and exaggerated promises, but to see a Latin man, who many would try to call an immigrant, learn that he has more right to be here than those that want to call him and his son names. Those name-callers, like Trump, are the true decedents of illegal immigrants in American, not the ones who were here before. Columbus is no hero in my world, nor is he one in Leguizamo’s. But we certainly learn about a few imperfect ones in his Latin History class given by an imperfect master for all of us morons.