Travesties – With Or Without Study, It’s Some Seriously Good Historic Fun

Travesties is not what I expected, not at all, when I first walked into the Roundabout’s American Airlines Theatre.  Now, I love Stoppard, although his plays sometimes take a whole lot of brain power. Generally that is a positive, but on that particular day, I was coming almost directly from a four-hour matinée of The Iceman Cometh, which, I may add, was very pleasantly surprising, and I was wondering if I had it in me.  I had never heard of this particular Stoppard play before though, but he is a playwright that has created a number of my favorite theatrical experiences, from the smart Rock ‘N’ Roll, the sweeping and glorious The Coast of Utopia, the fascinating The Real Thing, all the way to the exciting and romantic Arcadia which I was lucky enough to have seen on Broadway and Off. In my review of the PTP/NYC’s production of Arcadia from last summer, I wrote: “His words tend to weave a wild web that makes one feel enlightened, educated, and cared for. He makes me want to read up on topics and ideas so that I may fully understand what many of his intellectual characters are referring to and talking about. It was definitely the case with The Coast of Utopia, that magnificent masterpiece that played the Lincoln Center in three parts back in 2006. The more well read you were from the extensive suggested reading list provided in the program, the more you could take in all the layers and textures he had created. And the easier it was to follow the narrative” and the same can be said of his 1974 play, Travesties, although this play, it doesn’t seem quite as necessary. (But just in case you do feel the need, click here for the multi-page guide.) It certainly is a whole lot more fun than I naively imagined pre-show.

Back in the mid 19th century, a ‘travesty’, sometimes referred to as Victorian burlesque, was a genre of theatrical presentation that was very popular in England and in the New York theatre. It was a festive form of parody in which a well-known piece of classical theatre, opera, or ballet is adapted into a broadly performed comic play with a manner that was often thought to be quite risqué. It would intentionally mock theatrical and musical conventions and styles of the original work, often quoting or imitating its text and music. Stoppard, one of the greatest intellectual playwrights, has generously incorporated many of the same theatrical devices within this play, including puns, some perfectly ingenious limericks, and an extended rollicking parody of the vaudeville song “Mister Gallagher and Mister Shean“.

He inserts, with some vague and fanciful connection to history and reality, the true-life Zürich production of Oscar Wilde’s play The Importance of Being Earnest in which the lead character, Henry Wilfred Carr, a semi-notable British consular official stationed in that city, played with a stellar effervescence by the dazzling Tom Hollander (Almeida Theatre’s The Government Inspector) had a starring role. But not in the lead role, mind you, the other character. Now, what was his name?

Carr’s memories and Stoppard’s unique structure is stitched and layered with aspects of this and that Oscar Wilde’s play The Importance of Being Earnest, quite brilliantly using some of the framework of this iconic play, that Zürich production, and Carr’s mitigating feelings about it all as utensils to explore the greater concepts of art, war and revolution. He upends with an experimental ease features and aspects of Earnest prominently throughout, playfully including nonsensical versions of two characters, Gwendolen and Cecily, to tickle our fancy and joyfully overwhelm us with a myriad of word-play and literary witticisms. This is the Stoppard I love, mixing in modern vantages with historical references, all in through a unique lens of structure and style, to create a canvas unlike any other.

Travesties was first produced by the Royal Shakespeare Company at the Aldwych Theatre in London on June 10, 1974 and ran for 156 performances, before transferring to New York and winning the Best Play Tony Award.  A new revival, directed by Patrick Marber (NT/Vaudeville’s Dealer’s Choice), first performed at the Menier Chocolate Factory in 2016, broke box office records and became the first play in the company’s history to sell out before its first preview. It transferred to the Apollo Theatre in London, naturally, where it ran from February to April, 2017, and now finds a new home over on this side of the Atlantic for its first-ever Broadway revival, almost 45 years after its world premiere. With the same director and design team; set and costume designer, Tim Hatley (Broadway’s Spamalot), the lighting designer Neil Austin (Broadway’s Harry Potter…), and Adam Cork (NT’s London Road) the sound designer and composer of the original music, they have perfectly recreated the madcap structure of this fever dream of historical adventures. Director Marber has orchestrated quite the piece filled with such unrelenting joy and pleasure for the returning cast members; Hollander reprising his role as Carr and Peter McDonald (National’s The Veil) reprising his as the famous Irishman and writer, James Joyce, to playfully bring forth. It’s a miraculous invention of finely tuned dynamics and impossible fun, playing with history and dramatics in a way that all of us, even those who are less informed in such various topics as Marxism, Irish literature, World War I, and the nonsensical Dada, can enjoy.

Stoppard has playfully utilized the travesty formula throughout this uproarious production, throwing forth many of the ingredients featured in burlesque as he tells the fantastical story of Henry Carr, an elderly statesman who lived in Zürich in 1917 during the First World War. Hollander’s elastically charming old man Carr reminisces about that period of time when his less notable life crosses paths with the infamous and intense modernist author, James Augustine Aloysius Joyce (McDonald) as he works diligently on his masterpiece novel, Ulysses with his trusted secretary and Carr’s younger sister, Gwendolen, played by the divine Scarlet Strallen (Broadway’s Mary Poppins). It’s a wildly non-linear romp around the time frame, with Carr spending time arguing and playing with the absurdist, Tristan Tzara, played with joyful dexterity by the fabulous Seth Numrich (LCT’s War Horse),  as the Romanian radical free-thinker who founded the art form, Dadaism. He also engages with the compelling Vladimir Ilyich Ulyanov, more commonly known as Lenin, pompously portrayed strongly by Dan Butler (Roundabout’s Twentieth Century) as the clock ticks towards the Russian Revolution. He is in Zürich with his Russian wife, Nadya, played intensely and loudly by Opal Alladin (Cort Theatre’s On Golden Pond), and assisted, most gloriously, by Cecily, played with intellectual adoration by Sara Topham (Shaw Festival’s Saint Joan), who, just happens to also be adored by the love-struck Carr. All are fabulous, living and loving in Zürich carousing in the same circles, reading, writing, and dancing on tables. And although Carr’s memory is prone to distraction and fleets of fancy that fly through the air like a mad hamster running through the maze of his slightly off centered mind, the end result is both thrillingly satisfying and hilarious, albeit probably void of any realism in any way, shape, or form.

The real Carr did actually play the character, Algernon in the Zürich theatrical group called The English Players, with the real James Joyce operating as their business manager. Carr and Joyce had a falling out after the play, leading to a ridiculous round of legal action and accusations of slander by Joyce. Settled in favour of both on different counts. The whole action, reinvented by Stoppard in his Travesties, is played out insanely well by all, flying madly at each other in fits and fancy. In the real world, Joyce ended up parodied Carr in Ulysses, with Carr being portrayed as a drunken, obscene soldier in the “Circe” episode. It somehow makes perfect sense after seeing this production that a low-level bureaucrat, arrogantly demanding repayment for some fancy pants he bought to wear for a silly production of Earnest, would end up becoming immortal within the world of Joyce, and then Stoppard thereafter. After the first performance of Travesties Stoppard did received a letter from Henry Carr’s widow, not surprisingly, expressing her surprise that her late husband had been included as a character in Stoppard’s play. Once again, that makes perfect sense.

Keeping that wild Carr in check, repeatedly, is his trusted butler Bennett, played whimsically by the glorious Patrick Kerr (Roundabout’s The Ritz) as he ushers in the relentless repetition of the hilarious absurd and relentless fun that Stoppard has concocted. At the ringing of each and every bell, the news of the day is delicious brought forth, pulling us through the history with panache. As Todd Haynes, Artistic Director of Roundabout writes in the program notes, “Against the backdrop of World War I, Travesties dares to ask: Is art a necessary tool in the fight for social change, or a pointless substitute for meaningful action?” or maybe a little of both.  Stoppard plays with theatrical form with such abandonment, that it’s a gift for us all.  And like burlesque, he seamlessly entwines it all, so that the world can enjoy, using a wide range of music and dance, from contemporary songs and disco balls, to more period pieces of music, dance, and outrageous play.  All in the name of good fun, or important social change, depending on how much homework or study you did, or want to do. So go forth, dive in, read up, or not, as you’ll enjoy every drop regardless of how you enter.  I was tired, but left energized. So thank you Tom, for another great theatrical memory. 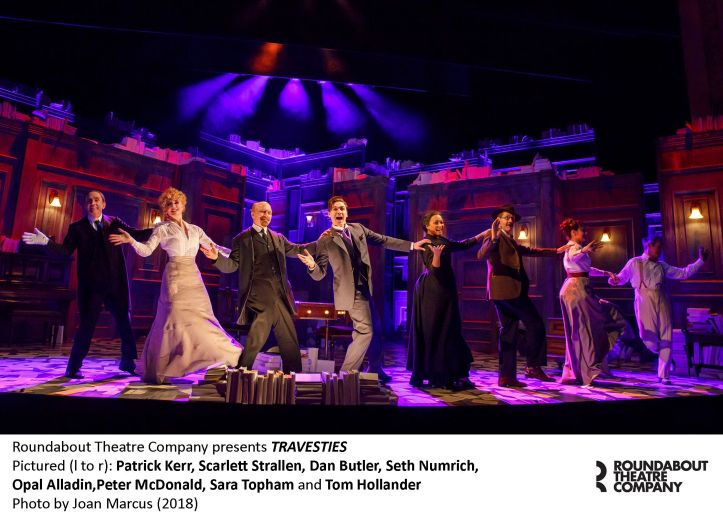