The Review: The Roundabout Theatre’s Bernhardt/Hamlet

The fascinating and iconic stage actress, Sarah Bernhardt, born Henriette-Rosine Bernard in October, 1844 is by all account, one of the most famous female actors of all time. World renown and celebrated, her story is filled to the brim with exciting and bizarre facts, many of which find their way into Bernhardt/Hamlet, the intricate and charming new play by Therese Rebeck (Broadway’s Seminar, Mauritius).  She was theatrical royalty, born the illegitimate daughter of Judith Bernard, a courtesan/prostitute with a wealthy upper-class clientele. Because of that, Sarah’s connections where powerful, her eccentricities extreme, and the stories that abound in this captivating ramble of a play almost sound too dramatic to be true. But they are. Gorgeously portrayed by Janet McTeer (Broadway’s Les Liaisons Dangereuses), the woman and the actress leap forward with dramatic poise and prose, all because of this equally gifted stage performer. McTeer relishes every word and breath that comes out of Sarah, even as the great one exclaims with exhaustion that there are just too many darn words and poetry in the great Hamlet.

Fearing the aging process, something that still feels as current as ever to actresses of a certain age, Sarah Bernhardt, somewhere in her 50’s at the time of the play, complains most dramatically that she’s getting too old to play the ingénue roles, and far too adventurous to play their mother. She’s needs a challenge and an adventure to stimulate. She needs fear, basically, as that is where theatre lives. She has triumphed as Ophelia, setting a standard that shakes the very soul of the dear and darling actress, Lysette, played sweetly by Brittany Bradford (Public’s For Colored Girls…), who has been gifted with that part in Bernhardt’s rendition of Hamlet. But this young woman’s shaking is not nearly as deep and to the core as the role Bernhardt lays claim to for herself. She is determined to tackle the Prince of Denmark; the lead role in what many state as the greatest role a male actor could take on.  And why shouldn’t a woman of her calibre challenge herself with this iconic role.  Men have been cross-dressing and playing Shakespeare’s women historically for years, so why shouldn’t a woman desire to undertake one of the greatest roles of any actor’s lifetime? Parisian society says no, but Bernhardt most definitely says, “why not?”. 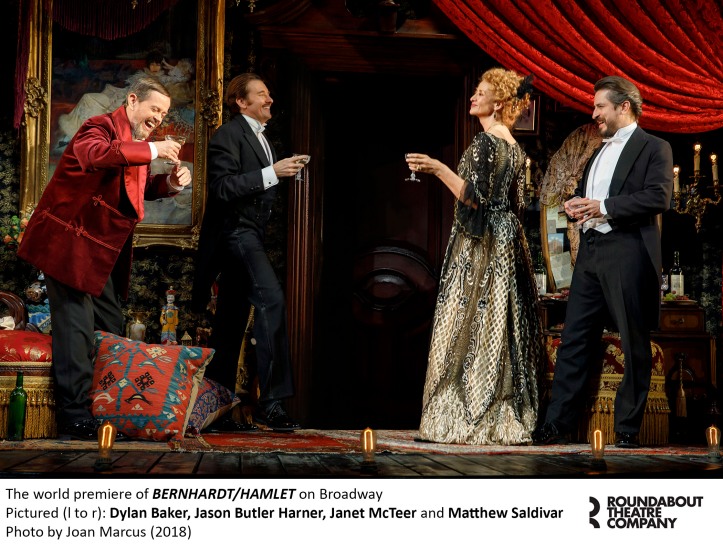 Framed by the beautiful proscenium of the Théâtre des Nations on Place du Châtelet, with gorgeous cut-aways revealing the theatrical ropes and sandbags behind each and every revolving restaurant and drawing-room conversation designed with elegance by the inventive Beowulf Boritt (Broadway’s Meteor Shower) with inventive illumination by lighting designer Bradley King (PH’s The Treasurer), the most famous actress of her generation stands center stage demanding our attention. She has been the inspiration to many, especially in the delicately handled affection with the painter of her theatrical posters, the compassionate and effervescent Alphonse Mucha, played beautifully by the talented Matthew Saldivar (Sam Gold’s Hamlet at the Public). His and her imagery are real and regal, and she has laid claim through her decades long career to hold the supreme right to sit on this theatrical throne. With every gesture and smooth-as silk-breath, McTeer transcends and enhances the royal crown of adoration that all give to the great Sarah, and now, after this dynamic performance, must be given to the actress who presents her. 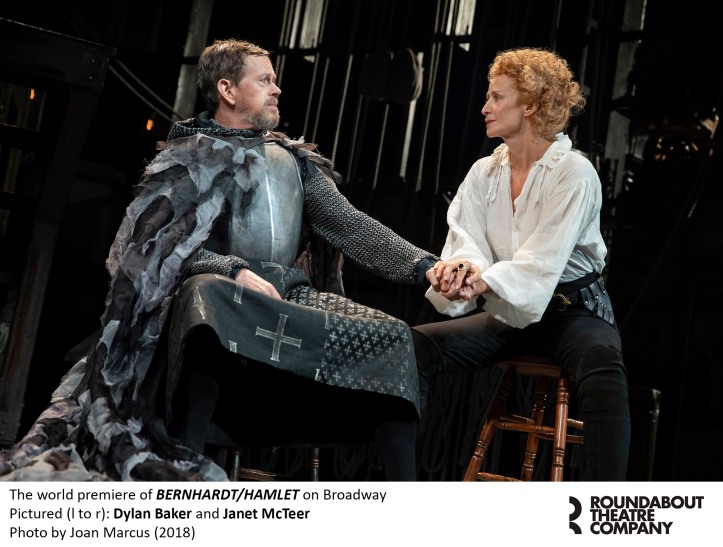 Standing by her side, the endearing Dylan Baker (Broadway’s The Front Page) gives a warm and engaging nuance to the fatherly actor and friend, Constant Coquelin, who, as he likes to repeat, has played the part many times before. This time round, he’s playing the part of Ophelia’s father, and the ghost of Hamlet’s father and King, but once that ghost is free of his armored facade, the actor finds this warm place in Bernhardt’s heart, illuminating their decidedly sweet attachment in a scene that starts with fits of laughter, but ends with something far more emotional.  It’s a beautiful piece of writing, but more to the point, it’s a delicate and engaging artistic creation that tells us, most clearly, that we are not just seeing a play about a great and celebrated actress, but a great acting team (Triney Sandoval, Aaron Costa Ganis are the two other actors in Hamlet’s cast), lead by a modern-day great actress, McTeer, finding their kernel of truth and clarity together in an acting scene deconstruction.

Sarah’s romanticized heart though, belongs to a little-known 27-year-old playwright by the name of Edmond Rostand, played charmingly by the dashing Jason Butler Harner (Ivo Van Hove’s The Crucible). He yearns most emphatically to love her more every time he hears mention of her name, but it’s Bernhardt who needs his presence most desperately to ground her by Hamlet‘s inactive side. She’s floundering in her character’s indecision, as unsure and uneasy as the Hamlet himself, and she needs her lover to remind her of her value and worth.  Their bond is as tight as their desire for one another is strong and unmanageable, cementing a long theatrical relationship between the two love-struck artists that successfully ignites her, but almost extinguishes his own passion for his work and his marriage to the smarter-than-she-pretends-to-be wife, Rosamond, played heroically by the majestic Ito Aghayere (LCT’s Junk) . In an epic throw-down that seemed ingeniously inauthentic, Bernhardt finds a way to release the entanglement that is driving Rostand mad, sending him away deceptively, claims his new play is horrendous in its portrayal of femininity, while also casually praising it for its poetry.  It forces him to leave, allowing him to refocus on the draft of his new play, a play you might have heard of once or twice before, Cyrano de Bergerac. Sounds outrageous, but this entanglement and a few other scenes and lines spurned me forward to do some research, not just on Bernhardt and Rostand, but on the timing and overlapping scenarios that brought forth both Bernhardt’s Hamlet and one of the most popular French playwrights and play of the period. I was shocked to read that although the dates and order might be a tad off-balance, the dynamics are in fact true, and the heights achieved are as surprising as one can imagine. 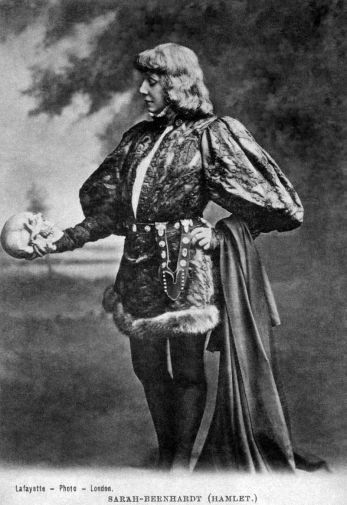 On May 20th, 1899, the great Sarah Bernhardt premiered one of her most famous roles, playing the titular character of Hamlet in a prose adaptation which she had commissioned from Eugène Morand and Marcel Schwob. Scattered throughout this smart and sassy play, Sarah bemoans that Shakespeare needs to “settle down” and drop a lot of those poetic phrases that make it difficult for her to connect and dissect all those pretty but meaningless words, words, words. The poetry, she wonders, must be different to a man, as it is to a woman, propagating a compelling question asked by everyone, especially the arrogant theater critic, played dryly by the wonderful Tony Carlin (Broadway’s Saint Joan); “is she Hamlet, or is she a flower“. It’s a dynamic after-dinner conversation that resonates as powerfully in this modern sexist world as it does among these gentleman in that elegant dressing room of the gorgeously dressed queen of the theatre; costumes by Toni-Leslie James (Broadway’s Jitney). It’s one of the most intricate moments to digest, and although the play overall left me wanting more of a resolution, the overall themes resonate. She has set free Rostand from her desperate and constant task of translational reconfiguration, and found her own space to play Hamlet with a bit of ironic help from her deliciously charming son, Maurice, wonderfully portrayed by Nick Westrate (Broadway’s Casa Valentina). Her Hamlet was said to be direct, natural, and very feminine, and I can only imagine its beauty and elegance.  But the Shakespearian performance that the entire play has been literally revolving around and around never fully materializes, becoming less of the focal point than the act of transformation that Bernhardt and cast must navigate.

I have often rewatched the wonderfully magnificent Canadian TV series, “Sling and Arrows“, not just for its brilliant look at the clashing of Shakespearian art and commerce, a concept mentioned in passing here, but for its nuanced deconstruction of Shakespeare’s text within an actor’s process.  Season one is all about Hamlet, naturally, (and a bit about Romeo and Juliet) and all of the words and poetry that make this role a mountain that all great actors aspire to climb.  It makes poetic sense that Sarah Bernhardt would want to navigate it as well, and in the extremely talented hands of Janet McTeer the process is more telling and entertaining than the final product could ever be. The play fails to end with a bang, like it does within the final moments before intermission, but it signifies a historical moment and its meaning to the profession. Berhardt’s performance of Hamlet received largely positive reviews when it took its bows in Paris, historically speaking, while only receiving mixed reviews in London. The British critic Max Beerbohm wrote, “the only compliment one can conscientiously pay her is that her Hamlet was, from first to last, a truly grand dame.”  Janet McTeer deserves similar praise, but without the inclusion of that sly British sarcasm. Her portrayal in Bernhardt/Hamlet is as great and grand as the dame herself. They both should take a bow.