The Front Page: Another Over Star Stuffed Play 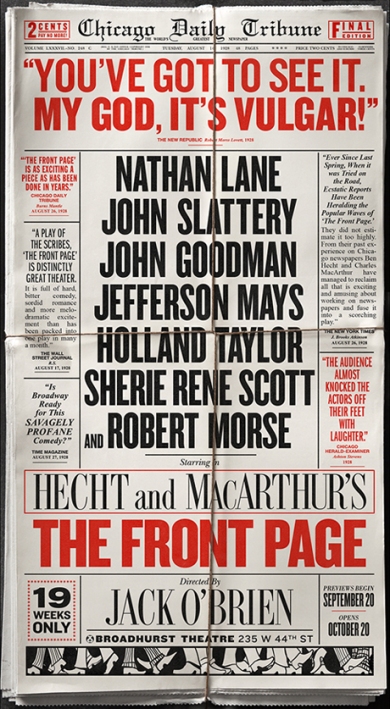 The Front Page: Another Over Star Stuffed Play

I had my reservations about the show, The Front Page currently playing at the Broadhurst Theatre. Too much of how it was being marketed reminded me of It’s Only A Play a few years ago. That star studded Terrance McNally play that turned out to be the most non-funny comedy of the year; cringeworthy and a bit of a bore. But it was a financial success. Selling out, mainly because everyone wanted to see that cast, F. Murray Abraham, Matthew Broderick, Stockard Channing, Megan Mullally, Rupert Grint, Micah Stock, and headlined with that Broadway star, Nathan Lane. Lane is also getting top billing here in Ben Hecht and Charles MacArthur’s The Front Page. Once again, he is being surrounded by a whole heap of well known stars;  John Slattery, John Goodman, Jefferson Mays, Holland Taylor, Sherie Rene Scott and Robert Morse. All are playing a part in generating that same feverish buzz and excitement and in turn, selling a ton of tickets.  And I was one of them who got pulled in. 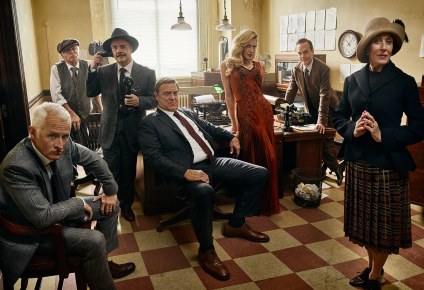 I wish I could say it was worth the hype this time around, but a dozen big stars does not a hit make. It’s not terrible by any means, but it’s not the comedic triumph either. Directed by Tony Award winning Jack O’Brien (who also helmed It’s Only A Play) with a fast-paced bombastic style that only few can carry off, the play itself does the first disservice by taking a long time to get the ball rolling. This play is in great need of a new vision, as the first act is painful to sit through. The six well cast actors, Lewis J. Stadlen (Endicott, Post), David Pittu (Schwartz, Daily News), Christopher McDonald (Murphy, Journal), Joey Slotnick (Wilson, American), Dylan Baker (McCue, City New Bureau), and Clarke Thorell (Kruger, Journal of Commerce) playing the crass crew of court reporters fast talking their way through the show, sadly, lack any distinction from one another. They all blend into one slightly loud but bland unit, rather then interesting individuals. So when Jefferson Mays (I Am My Own Wife) shows up as the highbrow poetic germaphobic writer, Bensinger from the Tribune, we all breath a sigh of relief.  Finally one of these guys stands out from the crowd and gives us some fun.  Also standing out is the odd policemen, Woodenshoes Eichhorn, played with a weird but comic charm by Micah Stock. I’m not sure what to make of that character to be frank.  I 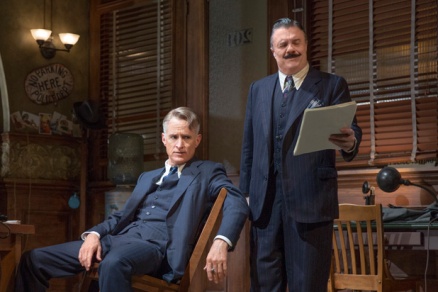 don’t think it’s quite the genius turn (like he did in It’s Only A Play), but at least it is unique. The set (Douglas W. Schmidt) and lighting (Brian MacDevitt) design are also winners here giving us a glorious 1920’s period piece set to gaze on, and a charming flash bulb energy at the beginning of each Act (yes, it’s a three act play with two intermissions).
As we slowly begin to fade into our seats as Act One drones on, we all kept telling ourselves, this is all information that we need to make Act Two and Three sing, so we refocus, pinch ourselves, and wait.  Finally, in walks Hildy Johnson, the ace reporter from the Herald-Examiner who has just quit the profession to go off to NYC and ‘marry the girl’, and work in advertising (coincidentally he is played by Slattery of Mad Men fame). Things are slowly starting to get  interesting with his entrance, and we also have the same response with the arrival of Mollie Malloy, played with a lot of heart and anger by the wonderful Scott.  Her first scene feels awkward, like she’s trying for something different, but at least there’s a spark of specialness somewhere in there. I only wish she had more to do or at least more fun to have ( I do miss the feisty sexy Sherie from Everyday Rapture, Whorl Inside a Loop, Women on the Verge of a Nervous Breakdown and hope to see her return to the stage soon in something a bit more fun). Same can be said for the other two females in the cast, Halley Feiffer (The House of Blue Leaves, Outer Critics Circle Award playwriting nomination for I’m Gonna Pray for You So Hard) as Hildy’s girl, Peggy Grant and Taylor (ANN), her talent completely wasted here, as Peggy’s mother.  All political correctness aside (and boy, is that pushed aside) these girls and dames do get the short end of the stick here, in their 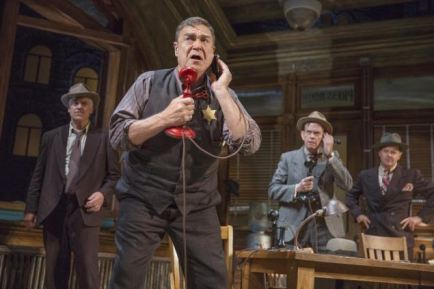 lines and in their direction. Only Scott manages to give us something closer to a fully realized character, surprisingly dark, but at least three dimensional. (Side note: the movie adaptation from 1940, My Girl Friday starred Rosalind Russell in the Hildy role, and Cary Grant as her newspaper boss and former husband, trying to win Hildy back both professionally and personally. Sounds like a good problem solver for this misogynistic comedy.)
[Speaking of politically incorrect, the words, insults, and labels tossed around in this play are sexist and racist; absolutely startling at times, and unnerving. This play takes place in a time of change in America, struggling with race issues and women’s rights. In some ways the play and this revival stay true to that moment in history, but even knowing that, it still makes certain phrases uncomfortable to hear being tossed around. That certain dangerous candidate would feel quite at home in this room of men, even though this isn’t as deplorable as his ‘locker room’.  He might be as unwelcome back then as he is now.] 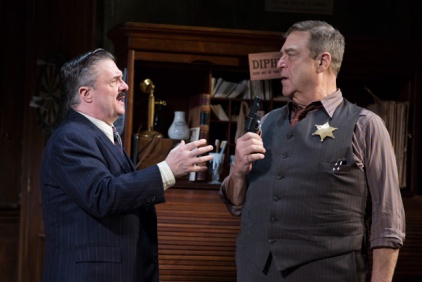 We have to wait until the middle of Act two, before any fun arrives, and his name is Nathan Lane. He is totally in his element playing the Herald-Examiner newspaper boss, Walter Burns.  Loud and ridiculously funny, he steals it away from everyone around. Slattery, a high point at the beginning begins to sound one note in comparison to Lane. After awhile, Slattery seemed just to be yelling his lines at whomever is around. And I don’t even want to begin to consider how Goodman, generally a powerful force on the stage (Waiting for Godot), became the weakest piece in this puzzle. He felt like the out of breath one of the group, wheezing out his lines, and trying to keep up with the rest. It’s sad to see these fine actors that I adore stuck working so hard with so little reward. It takes a certain stage craft to pull off the rapid fire dialogue in this dusty overly long play, and only a few have that ability. Lane gives us a master class in it, Scott assists, with Robert Morse (won his first Tony  in the original production of How to Succeed in Business Without Really Trying) also rising to the occasion in his small but pivotal part (Mr. Pincus). More of this kind of stage expertise is needed to turn this fast paced talker from a sleeper into a solid comedic hit. Let’s just rename the show; It’s All About The Front Page Players. 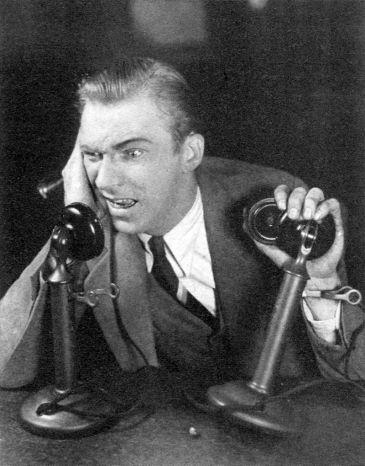 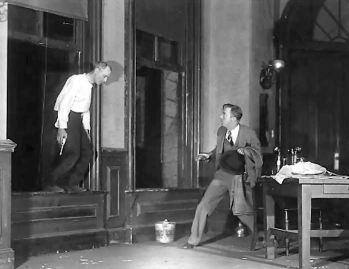 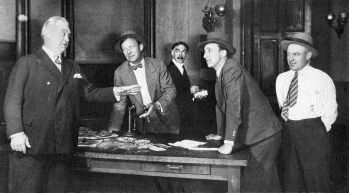 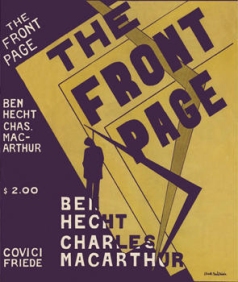 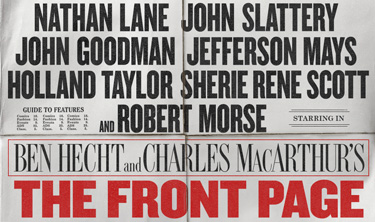