Until the eating begins, the mirrored preparation and wordless interaction of that first pivotal scene is almost aggressive in its silence without being angry, overtly. It’s quick and wisely sharp, saying much about the couple at the center of Second Stage’s Grand Horizons, the new and very funny play by Bess Wohl (Small Mouth Sounds, American Hero) that now occupies The Helen Hayes Theater on Broadway.  Married for 50 years, the elderly couple are living out their years in an Assisted Living community where all the buildings tend to look and feel the same. Much is made of this identity crisis of their living space and structure, but the internal identity of the two, particularly the mother and wife, Nancy, delightfully portrayed by the always excellent Jane Alexander (Broadway’s The Sisters Rosensweig), is equally indistinguishable from one mother-of-a-certain-age to the next, at least that is how she feels. Without a bank account in her own name, the dutiful wife of Bill, crisply portrayed with detail by the also formidable James Cromwell (HBO’s “Angels in America“), doesn’t know who she is or what she wants. As it turns out, neither does Bill. He doesn’t seem to have the vocabulary to articulate pretty much anything, nor the practice. But he certainly knows how to be accomodating.

“I have to be a whole person!” she states, after much contemplation, and we readily see her point. She has lived her life in secret, never articulating the sensual desires that exist inside this regale well put-together woman. As directed by Leigh Silverman (Broadway’s The Lifespan of a Fact) with a flair for the ridiculousness of selfish family dynamics, Nancy finally states a need, breaking the silence of the dinner, but only gets a passive “OK” in return. What follows is a hysterical family drama where adult children act like know-it-all children selfishly wanting personal internal desires of their parents to be set aside so their own adult lives aren’t disrupted. These two sons need a good talking to, it seems, in what it means to grow up and for parents and children to start seeing one another as true separate adults living out their desired imperfect lives. 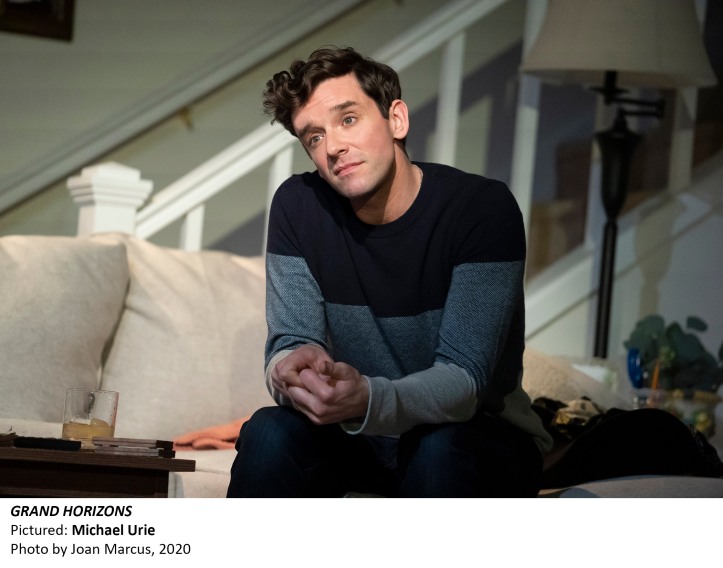 This is particularly true for Brian, the younger son and theatre teacher, hilariously portrayed by Michael Urie (2ST/Broadway’s Torch Song). He gestures out every twist and drop of humor from a script that doesn’t do the character much justice. He seems to be the one that grows up the least. even when his ridiculousness is so well pointed out by his nocturnal distraction from reality, Tommy, beautifully embodied and role played by Maulik Pancholy (TNG’s Good for Otto). Tommy stands up solidly, although pantless, for Brian’s parents and against Brian’s temper tantrum. It’s a powerfully real moment inside a very funny scene, but, as written, Brian seems to never really get the point, and stays steadfast in his need for everyone to just stay as they are, to “slough it out“, regardless if anyone is happy or not. Urie is magnificently and narcissistically charming and playful in his desperate need for paternal external validation for his life and lifestyle. This is particularly well demonstrated both physically and emotionally during Nancy’s historical late night truth telling moment that is, pretty much, every child’s nightmare. He must endure, most deliciously, listening to a parent talk about their sexual pleasure and body parts. But he can’t quite take it in, fully. It’s perfect in its discomfort, and hilarious in its presentation.

The older son, Ben, dynamically played by Ben McKenzie (Amazon’s ‘The Report‘) has a great task and arch ahead of him to grow through and embody. His very pregnant wife, Jess, magnificently crafted by the talented Ashley Park (Broadway’s Mean Girls), sets the dynamics up well in the family reactionary scene when the children come together to ‘solve’ the problem that now sits, steadfast, in front of them. It all messes with the son’s sense of solidness that they have come to trust and find comfort in. Almost every scene begins with a closing of that front door, and the symbol resonates, as the two sons keep trying to close the door to reality, and keep their parents together, even if it means they have to live out the rest of their lives unfulfilled and miserable. An “ordinary marriage“, as Ben disasterly states to his wife, sends their connection into its own “boa constrictor” swirl squeezing the conflicting roles of ‘Babe’ and ‘Mom’ into one, even as they both fight to be thrown away. The two performances beautifully elevate their insecurities to fill the room designed wonderfully by Clint Ramos (Broadway’s Burn This), with crisp costuming by Linda Cho (Broadway’s The Great Society), attuned lighting by Jen Schriever (PH’s A Strange Loop), and solid sound design by Palmer Hefferan (MCC’s Seared), until the walls of normality come crashing down around them. Was it intentional or accidental? That remains to be seen. 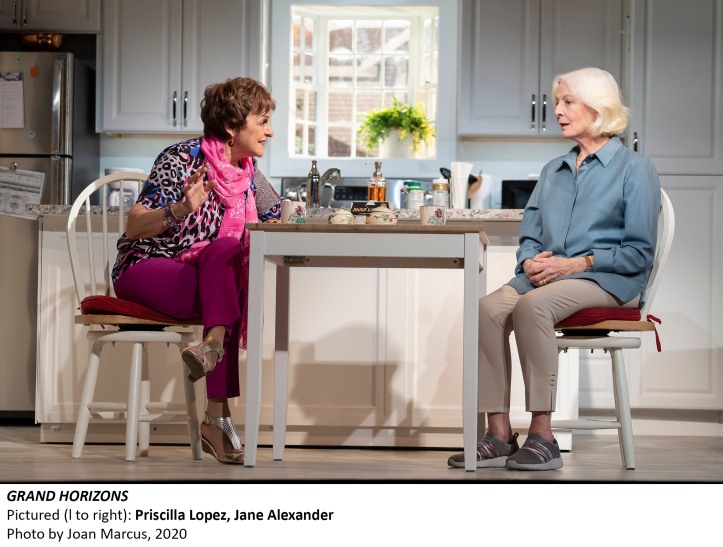 Thanks to a well used UHaul truck and a woman named Carla, the “donut freak“, wonderfully portrayed by the feisty Priscilla Lopez, the actress who created the role of Diana Morales in Broadway’s A Chorus Line, the escape plan gets messed up and broken. The family attacks and implodes with authenticity and humor. Love and emotional intimacy are difficult concepts for these adults to discuss honestly, with needs and desires hanging above without words attached rarely spoken out loud for all to hear. “Well, that’s that” but is it ever as simple as that statement by Bill when he tries to conclude the story. I wanted more for Brian and his as-written journey. I would hope that the playwright believes the gay man and theatre teacher could handle a bit more development, as much as his brother and his wife get to navigate through. But it really comes down to Nancy and Bill, trying to find the words and ways to count to 3 and reset.  And they do it beautifully and brilliantly, bringing down the wall of cracked suburbia, giving us hope in what love could actually mean for them, and for us.