The Lifespan of a Fact Finds Its Truth

The Review: The Lifespan of a Fact

I’m very glad that The Lifespan of a Fact didn’t follow the central city’s slogan where most of the excitement of this play takes place. “What happens in Vegas, stays in Vegas“, because only once the fact checker lands in Las Vegas, does Lifespan really find its comedic footing and its radiant charm. It’s not the deepest or insightful play, but what it lacks in that department, it makes up for in other ways. With the writing credited to Jeremy Kareken, David Murrell, and Gordon Farrell, based on the Essay/Book by the real life writer, John D’Agata and his fact-checker, Jim Fingal, the play starts off mechanically, with numerous interactions that are enjoyable, fun, but with the stalled feeling of a slow sunburn on unprotected skin.  Somewhere deep under the layers of rational facts and direction, the reddening of the play’s skin from the hot Vegas sun gets started slowly. There’s a strong need to be careful, we are told, and to confirm the facts that privilege some people, but never in that editor’s mind could the following stinging sensation of this process ever be imagined. It’s wildly amusing, and as directed meticulously by Leigh Silverman (Vineyard/Audible’s Harry Clarke, TNG’s Sweet Charity), the thrill and energy of Lifespan is waiting just a plane ride away from the magazine’s office.  So we patiently wait, knowing that with these three fine actors at the helm, the burn will be joyfully felt by all, eventually, because with this level of talent on stage, there is no way it could possibly go.

On a set designed with delightful intent by Mimi Lien (Broadway’s The Great Comet), alongside solid defining costumes by Linda Cho (Broadway’s Anastasia), purposeful lighting by Jen Schriever (Signature’s Thom Pain), original music and sound design by Palmer Hefferan (Public’s Wild Goose Dreams), and projections by Lucy Mackinnon (Broadway/Deaf West’s Spring Awakening), Lifespan finds its true sense of purpose once all three characters come together in Vegas. Daniel Radcliffe (Public’s Privacy, Broadway’s The Cripple of Inishmaan) is the revelation here, surprising and impressing the most of the three. He takes the odd-ball fact-checking Jim as serious as the character does his job, creating a character that could have been almost dull and annoying, but is the furthest thing from that.  Radcliffe elevates Jim into something jitteringly brilliant and captivating from start to electrifying end. Once he gets handed this assignment, Jim grabs hold and runs with it deconstructing sentence after sentence, and making each utterance delightfully devastating and precise. It’s an astounding achievement by the actor once made famous for playing that young lightening bolt wizard; to rise that far above the desert floor, especially since he is sharing that same desert air with two phenomenal stage actors; Cherry Jones (Broadway’s The Glass Menagerie, Doubt) as Emily, the editor, and Bobby Cannavale (Park Ave Armory’s The Hairy Ape, Broadway’s Mauritius) as the writer, John. “Mom’s pissed” but not because of his delicious take on the role, or his perfectly delivered performance.

All three actors do the exact same with this simple but fun play, rising a fine and enjoyable story to grander heights as Radcliffe does to his portrayal. With deliberate intent, The Lifespan of a Fact, based on a 2012 book co-written by the real life equivalents, John D’Agata and Jim Fingal, gets a production that is far more feisty and finely tuned than the actual play. Mirroring the wildly non-traditional experience of the book, which consists of D’Agata’s 2003 essay “What Happens There” in black text with Fingal’s comments (and occasional correspondence with D’Agata) surrounding portions of the essay, highlighting with ease the actual conflict perfectly.  It feels like the perfect antidote, chronicling with precision the exploration of the importance of narrative flow and the emotional feelings of specific words and numbers, alongside the desired role of facts when writing creatively about a true event, especially one as tragic as a boy killing himself. Washing your hands of the facts for the flow of a sentence and its structure is what is being debated, and that concept is perfect fodder for the stage. In this current world of “wrong facts” and confusing details, this inflammatory discourse between the two adversaries, who do hold respect for one another in an odd way, perfectly defined by Radcliffe and Cannavale, was really a seven-year ordeal that ignited with the original submission of the essay to The Believer in 2005, and finished with the 2012 publishing of the book. The debate between D’Agata and Fingal, refereed by Emily, the mother editor, gets pulled tight into a short one act play that is filled to the brim with wit and smart humor, but leaves one wanting a bit more juice in the end. The construct of the story is light and engaging, attempting to be profound but it doesn’t quite burn deep enough. Its sting is more funny than fierce, giving us a joyfully grand night at the theatre, and finding pleasure in playfully not feeding us Emily’s last call of the morning. 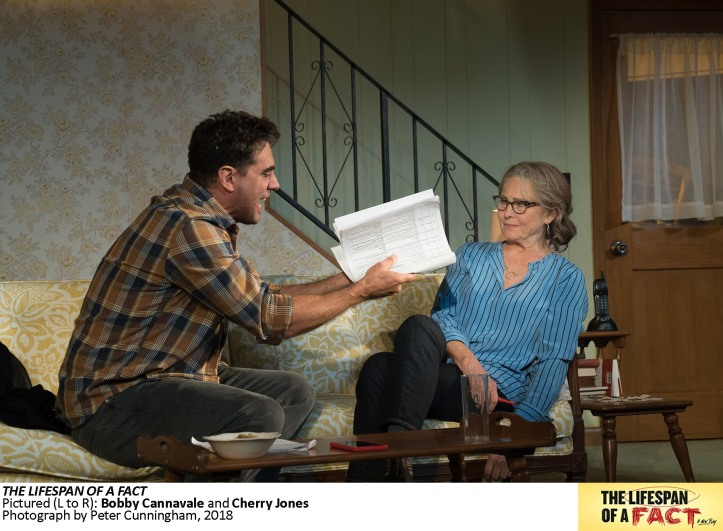