Many years ago, I was lucky enough to see Gross Indecency: The Three Trials of Oscar Wilde by playwright/master organizer of texts, Moises Kaufman in the off-broadway production back in 1997.  It was magnificent and a blessed history lesson in the downfall of Oscar Wilde, all for the love of one man, Lord Alfred Douglas.  David Hare’s The Judas Kiss, starring the supremely talented Rupert Everett, is an excellent companion piece to Gross Indecency, filling out the historical scenarios with the emotional subtext of Wilde, his friends, and his young narcissistic lover, affectionately referred to here as ‘Bosie’, magnificently played by Charlie Rowe.  His true love turns out to be something quite complex and disastrous for Wilde, but his culpability for his own destruction is fully on display in this tragedy, as is Rowe’s majestic manipulative selfishness and thoughtlessness. True love, it seems, is a messy affair, and not as beautiful as one would imagine. 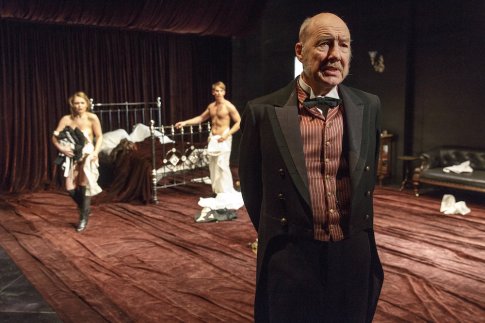 The first act opens with nakedness and sex, just as any play about Oscar Wilde should.  It’s a telling symbol of British hypocrisy and European sensuality. But there is a surprise here, and it’s not what we first would assume.  Well done Elliot Balchin and Jessie Hills as Arthur and Phoebe, staff of the Cadogan Hotel in London in 1895 with a dash of help from their boss, Sandy Moffatt (a wonderful Alister Cameron).  This is the place where Wilde seeks refuge from the press and council from a good friend and former lover, Robert ‘Robbie’ Ross (a meticulous Cal MacAninch).  Wilde also is desperate to find solace and guidance in Bosie’s arms, Wilde’s young, beautiful, and spoiled lover. Bosie has peevishly persuaded Wilde to sue his father in court for calling him a sodomite, heaping more fire onto a family feud between father and son. That trial does not go well as we can well imagine, and Wilde finds himself in the precarious position of being criminally indicted for ‘gross indecency’, which would certainly mean jail time for Wilde. The government, trying to avoid a scandal, has given him a window of opportunity to flee the country and avoid arrest, trial and imprisonment.  What will he do? Will he listen to Robbie and escape? Fleeing quickly to France while he still has the chance? Or will he listen to the selfish Bosie who wants him to stay and fight to defend his honor?

Literary history buffs and Oscar Wilde fans know the answer to this question but it doesn’t diminish from the drama of the play.  It’s a wonderfully performed and written piece, even if it was just this one act, but act two takes us deeper into the dark and complicated relationship of Bosie and Wilde.  Act two also opens with naked flesh when we rejoin Wilde in exile in a third rate hotel in Naples (set design: Dale Ferguson; costumes: Sue Blane; lighting: Rick Fisher) after his release from a very difficult two year imprisonment.  Rowe as the selfish Bosie is nearly perfect in the role, lazily preoccupied with his own pleasure and aristocratic frivolity, namely a spectacularly handsome (naked) Italian fisherman, Galileo Masconi (an ideally

cast, Tom Colley) while a very broken and desperate Wilde sits basically immobile in an armchair.  Everett couldn’t be more suited to this role even as he spends much of Act two confining himself to that chair. (The same, I hear, could not be said of the original West End/Broadway production in 1998 starring Liam Neeson as Wilde and Tom Hollander as Bosie; popular with the ticket buyers but not the critics.) Everett inhabits the part as if it was tailor made for him, as is MacAninch as Robbie who arrives in Naples to try to save him from Bosie and himself.  MacAninch plays him a bit on the one-note side in his goodness but one can understand Robbie’s love and devotion for Wilde even while the love is a bit lopsided and unequal. But Bosie is a whole other story, his love is completely for himself, and he has a very different plan for survival. 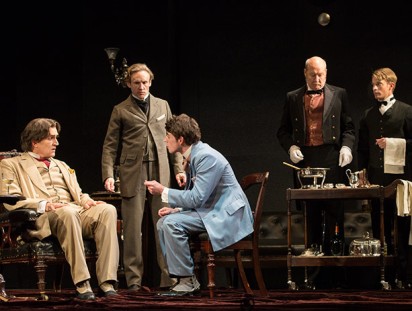 It’s a devastating story to watch, of such love and such betrayal by the grand shallow Bosie and the all too proud Wilde.  Directed impeccably by Neil Armfield, with the help of Hare’s beautiful text, there is a delicate balance between the arrogance of Wilde that helped usher him to ruin, the thoughtful care and conservatism of Robbie, and the blatantly dismissive and manipulative nature of Bosie.  The blame-scale tips towards Bosie maybe a bit too much in this telling of this tale, but the final kiss good bye leaves us all watching and waiting for a witty and sly comment from Wilde, and what we get is something all more powerful; a still and silent all-knowing stare.