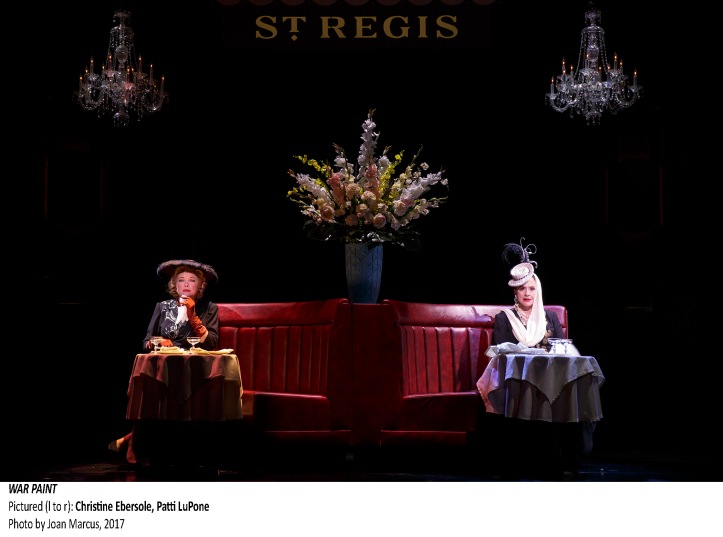 OR Still Expertly Applied to a Mediocre Face

A few blocks north at the Palace Theatre, Glenn Close is getting a mid show standing ovation in Sunset Boulevard (one of my favorite theatre-going companions is over there this very same night). She is singing her big number “As If We Never Said Goodbye” half way through Act II to rapturous applause as is Bette Midler in the sure to be nominated Hello, Dolly! singing the title song, but over here at the Nederlander Theatre, two of Broadway’s biggest talents, both Tony Award winners, Patti LuPone and Christine Ebersole are up on stage singing song after song rivaling any and all others. There is no comparison. Both of these stars of War Paint are winning a different type of theatrical war then the one being chronicled in this touching big-number filled musical. The Broadway diva sing off trophy is easily won by LuPone, with a close second going to Ebersole. Will that turn into a Tony Award in June? I Bette-cha it does not, mainly because War Paint, although vocally magnificent, as a whole, it doesn’t rival that classic Dolly delight musically. With a book by the oh-so talented Doug Wright (I Am My Own Wife), music by Scott Frankel, and lyrics Michael Korie (the whole Grey Gardens creative team), War Paint fails to rise above the pedestrian, doing justice to this interesting story, but unable to rise the whole piece as high as some of the notes being sung.

I was flush with anticipation when I first saw War Paint in Chicago. It is not often that a brand new musical comes around starring two such huge Broadway stars, let alone one that sounds so exciting and is filled with such possibility.  The musical, directed by Michael Greif (Dear Evan Hansen, Grey Gardens again), is about the personal and corporate war between rivals  Elizabeth Arden, the blond WASPy cosmetic marketing genius behind the hugely profitably and exclusive Red Door Spa, and Polish-born Helena Rubinstein, the wildly successful makeup mogul.  It sounds like a golden idea made in stylistic heaven. Bravo to set designer, David Korins (Hamilton, Bandstand), costume designer, Catherine Zuber (Fiddler on the Roof), lighting designer, Kenneth Posner (If/Then, The Coast of Utopia), and wig designer, David Brian Brown (She Loves Me), they elevate this musical to majestic levels, matching the two heavyweight actresses that are in each corner, operating at the height of their game, battling it out in front of our very eyes. But with mascara, not boxing gloves.

And I wasn’t wrong. Both LuPone (Gypsy, Shows for Days) and Ebersole (Grey Gardens, 42nd Street) are magnificent (although LuPone’s accent initially gets in the way of us catching every delicious line she zings out, but only initially). Their voices are both spectacular; unique stylistically and tonally very different from one another, but perfectly matched. They couldn’t be more wonderfully paired to embody the culturally and symbolically polar opposites these two cosmetic legends.  Listening to them sing separately is a gift, but singing together, surprisingly, is a pure slice of heaven.

I only wish that what they had to sing matched the perfect sound that these two are gifting us with.  The music and lyrics, although used most efficiently to tell this complicated and detailed historical story of their rise to fame and fortune while warring with each other, slowly begins to blend in with each other like the rouge on a cheek.  Every moment sounds lovely and we are totally engaged, but the songs don’t vary enough from each other overall.  Looking over the titles now, I can vaguely remember how they sound (beyond the phrase and the song ‘Beautiful ‘).  Standouts are ‘If I’d Been a Man’, ‘Face to Face’, and LuPone’s solo, ‘Now You Know’. The opening number, ‘Best Face Forward’ is a compete disappointment, especially in it’s placement and its reprise.

Here is where I’m guessing the main problem resides. The details and the idea of the story are very compelling on paper, but in the act of telling this story, the characters go through a lot (Senate hearings, social rejection, World War II)in their 40 year history, but is there a personal developmental arch?  They have obstacles to overcome, including each other and the two men that inhabit their lives, but very little personal change or dynamic realizations.  And in the end, the emotionality hasn’t evolved that much from the beginning. The choreographer, Christopher Gattelli (Newsies, South Pacific) attempts to add some pizazz with a few numbers that feel showy and distant, such as the excessive ‘Fire and Ice’, because ultimately War Paint is about these two rival titans who are powerful and in charge of their own companies and destinies, way ahead of their time, who detest but ultimately find fire and drive with-in their rivalry.   Their feud with each other fueled their passion for success but how many scenes can have these two dynamic ladies seated or standing on opposite sides of the stage singing one stunning song after the other, sometimes on their own, or sometimes in a duet about their parallel challenges.  It’s a trap in a way that the creators never really figured a way out of. So I appreciate the attempts to give us something else, although all too often it feels like fluff.

The secondary story line involves the two men in both their lives, the macho Tommy Lewis, played effectively by John Dossett (Pippin, Newsies), Arden’s initial business partner and husband, and the gay gal-pal Harry Fleming, played by the talented Douglas Sills (Living on Love, The Scarlet Pimpernel) who initially worked with Rubenstein and helped market her products to great success. And then, they both switched sides. It’s a grand attempt to give us something else, and another opportunity to utilize a few different stage movements outside of the two leading ladies walking around each other. Sometimes these two men are diverting and entertaining, such as the fun and charming song, ‘Dinosaurs’, but more often then not it feels like posturing gay and macho stereotypes coupled with repetitive nonsense, like the number ‘Step on Out’. Either way, it feels forced, because what we really are interested in are these two perfectly paired cosmetic dynamos.  But alas, the development of the emotional and psychic space is limited. They start and end with pretty much the same psychological stance, hating while respecting each other.  The last scene when these two finally are caught in the same room, face to face, is refreshing and emotionally compelling, but not all that revealing. It was a moment that never actually happened in the real world, but maybe we needed a bit more of this fantasy face to face. I did love the under developed but utterly fascinating thesis that is tossed out in a delicious line in that final confrontation, “Did we make women freer, or did we enslave them?” The answer is maybe a little of both, I would imagine. At one point Lupone’s Helena explains that every morning she looks at herself, and forcibly tells the mirror that she is beautiful, even though she doesn’t really see herself that way in the traditional sense.  After she applies her war paint, she dramatically dares the mirror to defy her.  It’s perfection, and in many regards, LuPone is daring us too. Just try to defy these two Tony winning stars their stupedous power. The bone structure may be plain and in need of some work, but when expertly applied, this War Paint sure looks and sounds beautiful.