Falsettos: Welcome to Falsettoland circa 1992 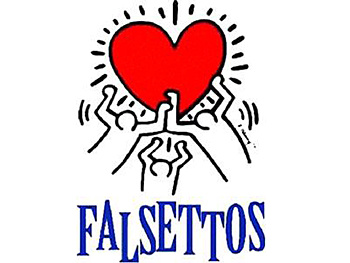 Falsettos: Welcome to Falsettoland circa 1992

By Ross
Years and years ago I saw this show on Broadway. I didn’t even live in New York at that time, but it was the show to see back in 1992.  I don’t remember very much about Falsettos, except that I was moved. And that I cried. But most of all, I remember white couches on wheels, being flung around a bare stage with great force. What that says about my memory, I’m not sure, but Falsettos is back on Broadway. The wheels are off, but the power and force to move us to tears is still firmly in place.

William Finn (music & lyrics) and James Lapine (book) created such a non-traditional sound and voice when they wrote this show.  This team is also responsible for the very similarly unique sound of The New Brain (which I loved when it was performed at the New York City Center Encores! Off-Center: https://frontmezzjunkies.com/2015/06/28/a-weird-and-wonderful-new-brain/ ). It’s a powerful voice that sounds like no other. The music in Falsettos is gorgeous and fun, complex and surprising, and with a show aimed at exploring sexuality, alternative families, and AIDS, it doesn’t, even to this day, seem to handle these in traditional or melodramatic ways. It has given us a more realistic, heartfelt, and sobering view, while delicately managing to avoid becoming a Lifetime movie of the week.

Christian Borle returns to the Broadway stage after a successful run as the total rock star Shakespeare in the very funny Something Rotten. This time he’s portraying a far more complex part, and although his performance is a bit rough around the edges, he mostly succeeds. That beautiful and powerful voice of his brings us into his world where we, eventually, give into his charm. As Marvin, he has the delicate task of making us root for him, as he leaves his son and wife to be with another, the not-so-sympathetic Whizzer (played with an arrogant charm by Andrew Rannells). It takes some time to get on board with this new couple as they passionately do battle for control, fighting and loving with a fierceness of lions.  This hesitation is especially real as we are totally won over by the delectable Stephanie J. Block (The Mystery of Edwin Drood) and her show stopping portrayal of

the suffering ex-wife, Trina.  Her knock out number, ‘I’m Breaking Down‘ and her second act ballad, ‘Holding to the Ground‘ win us over completely. We are totally on her side, and thrilled to witness her falling for the psychiatrist, Mendel. He is hilariously played by Brandon Uranowitz (An American in Paris), with such emotional depth and comic zest that we forgive his character of all the moral and ethical issues brought forth, and we happily embrace their romance.

Maybe one of the most charming roles, besides the delicious lesbians next door (the incredibly talented team of Tracie Thoms and Betsy Wolfe) is the young son, Jason, played with endearing delicacy by Anthony Rosenthal.  His awkwardness and strength register and

compel us, especially in the fantastically fun number, ‘The Baseball Game‘ to join in and cheer him on.

I must admit that I wanted to cheer this whole show on from beginning to end. It’s fun and connecting. Beautiful, emotional, and engaging. Painful and sweet. But, there are also moments that feel dated and confusing. Example: what is up with that one song, ‘March of the Falsettos‘? It feels like it was held onto because of sentimental reasons rather then good theatrical choices. This could be one problem with keeping the same director (Lapine) as when it first played on Broadway. It feels respectful since Act One used to be a stand alone one act musical, The March of the Falsettos, but that awareness could have been an obstacle to updating and clarifying a new fully realized production. In this lies the show’s biggest weakness. A new eye, and different vision would have elevated this beautiful show to a higher level than what the final Falsetto became.