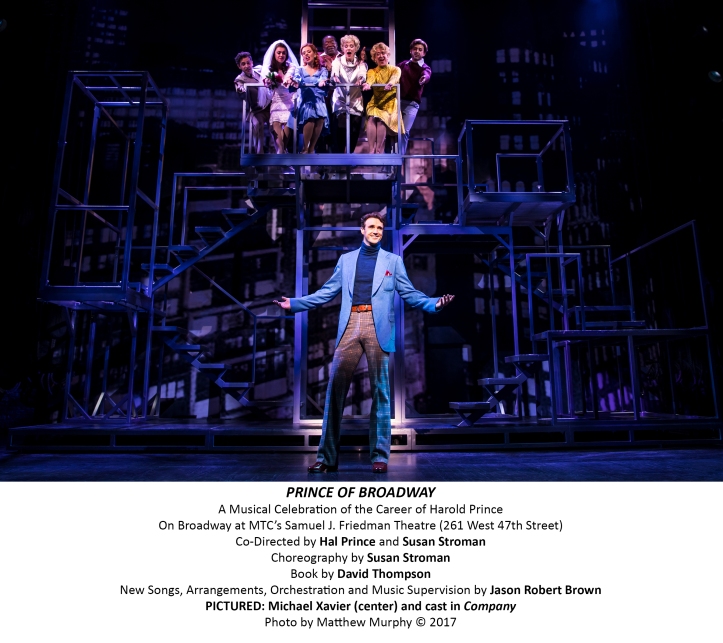 By Ross
So here’s the thing that I’ve been pondering as I wandered into the Manhattan Theatre Club’s Samuel J. Friedman Theatre. What does a show look like when it’s a retrospective of a famed musical director and his work on Broadway compared to a writer’s retrospective? I’ve seen numerous Sondheim nights over the years; Sondheim on Sondheim, Putting it Together, and Ladies Singing Sondheim, to name a few, and loved each and every one (at different levels of appreciation) but I do love his style and composition. I wouldn’t be as interested in an Andrew Lloyd Webber night to be honest as I find that his older stuff hasn’t aged all that well, where as Sondheim seems ageless. But a director ‘s work, even one as stellar as Harold Prince, doesn’t seem to have the necessary ingredient of introspection to compel it forward. In Prince of Broadway, there is the structure of his career path from one show to the next and his life’s work, but what seems to be missing is an investigation into his process and motivation. Do we learn more about the man? Not really, but with a book by David Thompson (The Scottsboro Boys) what we do get is a ‘best of’ revue performed by a cast of pros following his over sixty years of work. It’s a jukebox musical of some sort that focuses on recreations of memorial moments, without giving us much insight as to the why and how.

It starts off beautifully with a great setup , a ghost light, and a wonderful overture arranged by Jason Robert Brown (new songs, arrangements, orchestration, music supervision).  The cast, one by one, enters and speaks for Harold Prince, the director of his own retrospective, with Susan Stroman acting as co-director and choreographer. They talk about the luck of being at the right place at the right time, and connecting with the right man, George Abbott in Prince’s case, at the right moment.  And then, without much more fanfare, we are off to the races.  Starting back in 1954 with Pajama Game, and “Heart” from Damn Yankees (1955), sung with gusto and great harmony by Brandon Uranowitz (Falsettos), Michael Xavier (Sunset Boulevard), Chuck Cooper (The Life) and the always amazing Tony Yazbeck (On The Town). We get solid and serviceable recreations of sets by Beowulf Boritt (Come From Away), lighting by Howell Binkly (Hamilton), sound design by Jon Weston (She Loves Me), and costumes by famed designer, William Ivey Long (On The Twentieth Century), as a director’s vision is what we are looking into, not the music or the lyrics. It makes the numbers feel a bit dated, but it also is charmingly reminiscent.
The men in general fair very well in this show, showcasing killer vocals and, when needed, great dance moves (Yazbeck in Follies‘ “The Right Girl”).  Cooper shines as Tevye from Fiddler on the Roof (1964) and the wondrous “Ol’ Man River” from Show Boat (1994).  Xavier gives a disappointing and overdone rendition of “Being Alive” from 1970’s Company, making me wish the stronger voiced Uranowitz, who sings a wonderful “Willkommen” from Cabaret (1966) and “Dressing Them Up” from Kiss of the Spider Woman (1993) had been given the task instead. 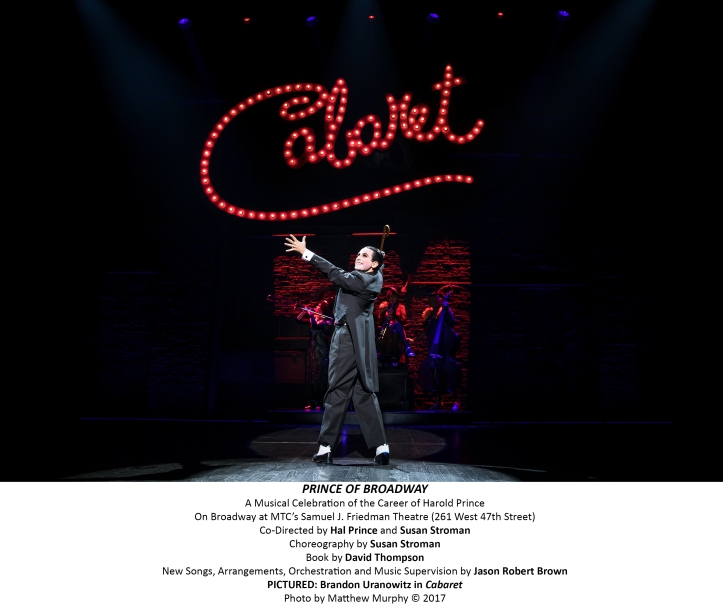 Other great shows that get their due are 1957’s West Side Story, 1963’s She Loves Me, and a very fun number from the flop, It’s A Bird…It’s A Plane…It’s Superman (1966) called “You’ve Got Possibilities” sung with a saucy attitude and some great legs by Janet Dacal (In The Heights).  And that’s just in the first half of Act one. The music sounds glorious, due to Fred lessen as music director (Bandstand) and musical coordinator, Michael Keller (Anastasia). The ladies, Emily Skinner (Side Show) and Karen Ziemba (Contact) get the juiciest female roles as Phyllis and Sally in 1971’s Follies and Desiree (Skinner) from A Little Night Music (1973).  Kaley Ann Voorhees (The Phantom of the Opera) does a beautiful Marie in West Side Story, and also recreates the three iconic numbers from Phantom with Xavier who finally redeems himself in the title role. 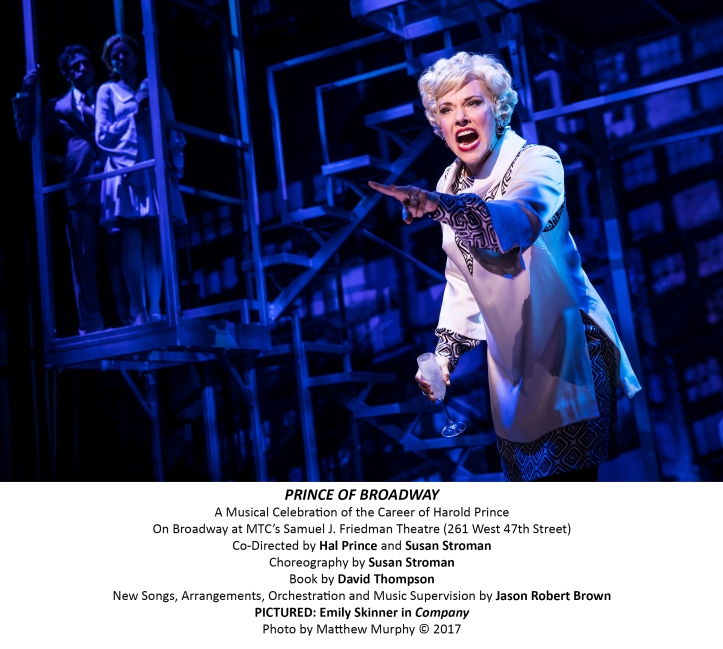 Part way in, Prince of Broadway starts to feel like a greatest hits parade done by American Idol contestants belting the numbers out in order to win this round of the competition. It feels speedy and showy, and without a narrative to ground it or inspection to deepen. It feels a bit heartless, without a lot of subtlety and nuance. Bryonha Marie Parham’s (After Midnight) rendition of “Cabaret” seems far too fast and furious without playing around enough in the muck of negative emotions. Ziemba’s Mrs. Lovett and Cooper’s Sweeney Todd lack any shades of grey. As does Skinner’s over the top “Ladies Who Lunch” and Dacal’s Evita.

One starts to remember with fondness all the stars of the original productions who have been embedded into our collective souls and memory. This is a show that makes you think back to the moment when we first heard or saw some of these shows, as originals, movie versions, or if we were lucky enough to see a great revival. Sadly, I started to want to hold on to the creations of LuPone’s Evita and/or Mrs. Lovett, Esparza’s Bobby, Topol’s Tevye, or Minelli’s Sally Bowles. I wanted the subtlety that I remembered, not the over the top salesmanship that was being sold here.  Prince said it the best when he talked about not really wanted to do revivals, as the memory of the original made too much of an indelible impression on our minds, and all future performances.  Whether we like it or not, the originals will be forever remembered, and everything after will only be compared to them.  This show, in its natural set-up almost begs us to do so.  And in this case, that’s not a good thing.