In Transit: No Delays Here 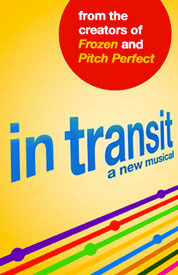 In Transit: No Delays Here
By Ross
Riding the Q train home after the thrilling new musical, In Transit, the first A Cappella musical ever to hit a Broadway stage, I dreamed of having such a joyous commute home. If only every subway ride could be as smooth, festive, and impressive as this show is (lovingly directed by Kathleen Marshall) – I write this as I sit on a stalled subway, filled with Christmas shoppers and drunk SantaCon revelers inching my way to Brooklyn on the slowest ride home in memory. What is happening on that glorious stage at Circle In The Square, is a commute from heaven. And nothing like the one I’m having right now.

From the creators of Frozen and Pitch Perfect, Kristen Anderson-Lopez, James-Allen Ford, Russ Kaplan, and Sara Wordsworth (book, music and lyrics), this delightful romp through the New York City Subway system is about the comings and goings of a group of aspiring New Yorkers trying to find love, happiness, and success in the Big Apple.  The design team has done a great job in giving us structure and movement (scenic: Donyale Werle; costume: Clint Ramos; lighting: Donald Holder; sound: Ken Travis; projection: Caite Hevner), helping the show keep moving and flowing, something the MTA could learn a few things from. The cast are all simply magnificent in their vocal and acting abilities. It’s really incredible what they can do vocally, especially the one referred to as ‘Boxman’. Chelsney Snow (who shares the part with Steven “HeaveN” Cantor) is basically the narrator, the spiritual/guardian angel, the sound effects department,and the whole 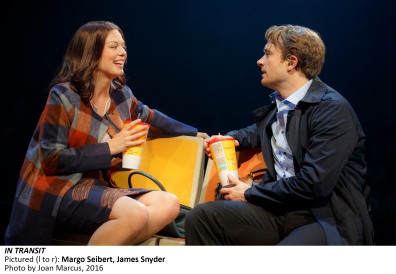 percussion/musical accompaniment. Without his extreme talent, I would guess that the A Cappalla sound would wear thin in this 90 minute musical, but it never does (kudos to A Cappella arrangements: Deke Sharon; music supervisor: Rick Hip-Flores).  The overall sound feels full and has depth, and never wavers nor does it become repetitious.
The actual story lines of these commuters might seem a bit on the slight side, and most of the characters can be summed up in two or three words.  On the surface the stories seem standard, but as we keep riding along with the young, fresh, and super talented cast, we

become invested and surprised by the twists and turns of these simple but connecting commuters’ lives. These stories don’t, in the end, take you where you expected them to.  It’s no Ibsen or Dear Evan Hansen for that matter, but it’s not cookie cutter theatrics either.  There is the aspiring actress/temp employee, Jane (the magnificent Margo Seibert) who is looking for her big break on Broadway (Seibert had it with Rocky The Musical as Adrian) and sorta kinda looking for love.  In regards to the aspiring actress part, the reason this musical works so well, is the basic core of these stories are real.  An actress friend said to us after the show, “I think I’ve said the exact same things to myself on a subway coming home from an audition”. And I can believe it.  We have all been there, talking to ourselves on a subway coming home from something that we are attempting to change and advance in our lives.  It doesn’t have to be even professional or theatrical in subject, but the trueness of these lines connect with us in each and everyone of our individual hearts.
Over here on this side of the track, we meet another soul looking for a way to move forward. The handsome, kind, down on his luck, former ‘king of the world’ Nate (the very endearing James Snyder) is looking for a new start, and, in true honestly, we hope he crashes into Jane along the way (we get our wish). Over there, riding on a

different train, is Nate’s sweet, slightly desperate sister, Ali (a wondrously funny Erin Mackey) neurotically coming unhinged a little. Freshly dumped by a guy she left the west coast and school for, Ali is looking for a new route to take in life. Waving and saying hi from a different subway platform is Ali’s friends, the lovely and adorable gay couple Trent (the exceedingly good Justin Guarini) and Steven (the unquestionably amazing Telly Leung – sadly not given nearly enough to do here).  Trent and Steven, who have a fantastically fun early number, “Four Days Home”, are recently engaged, planning what sounds like the sweetest wedding, but struggling with Trent’s in-the-closet status with his mother, (the magnificent Moya Angela, who can do no wrong in numerous parts throughout the show).  Like Angela, there are others as well, all on a journey from one place to another. And all with stupendous vocal abilities and range: Kathy/Gerianne Perez, Dave/David Abeles, Chris/Nicholas Ward – what a voice he has!, and Nina/Mariand Torres. They are the ones playing all those other parts, and filling in the background with a vocal richness of sound.

Together they are making that journey, trying to move forward from point A to point B, all the more exciting, layered, and engaging.  This show would not sound so good without them.
In Transit is a story we can all relate to, especially those of us who did move to NYC and ride that annoying and needed subway system daily.  It’s a journey, sometimes extremely delayed, with lots of obstacles and track work along the way.  Other times it is glorious. The songs ring true and engage us beautifully.  “Do What I Do”, “Broke”, “Saturday Night Obsession” set up these characters quickly and completely with fun, wit, and charm, giving the talented cast tons to work with. Our personal journey through life in NYC might not be so tidy in the end, but in the world of In Transit, everyone gets to where they want to go, beautifully, even if it’s not the place that was planned.  It’s a harmonious fun journey with this group of commuters, one that I would trade in for any day of the week.
In Transit on Broadway