Women of a Certain Age. The Gabriels: Election Night Dread

I don’t think I’ve ever said this before, but I was so not looking forward to a night at the Public Theater to see The Gabriels: Election Year in the Life of One Family -Part III:  Women of a Certain Age.  Imagining myself sitting in the theatre made me feel uncomfortable, even though I found the set up of this three-part adventure exciting and intriguing.  All three plays feature the same cast of characters doing the same thing that they did in the two previous plays; making dinner in a warm kitchen in the old family home of the Gabriels (perfectly designed by Susan Hilferty and Jason Ardizzone-West, with lighting by Jennifer Tipton and sound by Scott Lehrer and Will Pickens). They come together, slice and dice their way through meal preparation, talking about the world they live in and how they are responding to it.  It’s a beautiful and intimate structure, realistically written and directed by Richard Nelson.  The three plays explore the family’s difficulties, anxieties, and the communal struggle with grief due to the loss of the oldest sibling, husband, and son, Thomas. I was excited to see the second play, What Did You Expect? earlier this fall (check out my review: https://frontmezzjunkies.com/2016/10/09/7970/) but this time I entered into the theatre with a surprising dread. (Turns out that prize goes to the incredible play, Sweat also at the Public Theater.  Watch for the review that I’m writing up after seeing it yesterday.)

Women of a Certain Age, the third and final chapter of this series, takes place on Election Day, Tuesday November 8th, 2016 from around 5pm to 7pm – and to blur the playwright’s world and the real world we live in to a greater degree, it was also the night/time that the play officially opened at the Public Theater. Nelson, I am told, was writing and rewriting right up to the opening night curtain trying to keep it as relevant and timely as he could. On Election Day/opening night, November 8th, I thought this was such a thrilling set-up, but the day after, on November 9th, everything had changed.

Election Day, November 8th, 2016 for me will go down in my personal history as one of the most upsetting days/nights in this Canadian man’s New York City life.  I was/am still devastated and angry that the most qualified person ever to run for President did not win, and that horrible man did.  This was not something I wanted to relive weeks after the event.  But here I was, a few weeks after Election Day, and I was going to have to sit through and engage in the Gabriel’s Election Day experience. Two things that gave me a small bit of hope was that the play ended before the tide had turned, so no outcome could be discussed. But the main thing that got me into the theatre that night was, from the structure and content of the second play, that the characters talked a bit of politics, although they focused most of their attention on many other topics.  Knowing that, the more I thought about joining the Gabriels for ‘dinner’, the more safe I felt about coming into their home for an Election Night gathering. 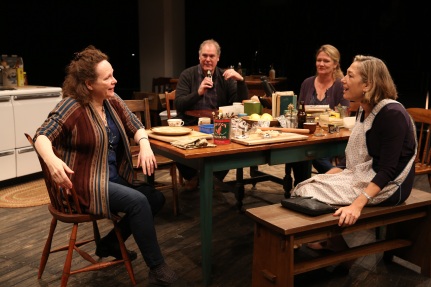 As I had described in my review of What Did You Expect?, the cast (Meg Gibson, Lynn Hawley, Roberta Maxwell, Mary-Ann Plunkett, Jay O. Sanders and Amy Warren) are all completely marvelous.  And in this final installment, they are only more engrained into their characters. They make being in the presence of this family feel authentic, comfortable, and easy, even when we hear and witness the jabs between members brought on by decades of real family dynamics.  This family is not perfect, by any means, but their connections and mutual love feel secure; their attachments to each other are solid.  They are caught in a difficult and uncomfortable place though; dealing with joblessness, financial struggles, the loss of the familial home, and an election laced with misogyny, racism, greed, and blatant lies.

Surrounded by the upwardly mobile weekend home owners of Rhinebeck, N.Y., the Gabriels are struggling economically on a downward spiral about to lose the family home due to one bad financial decision made by the matriarch of the family (an exceptional Maxwell). On this day, they have bigger problems to deal with. They barely give much air time to the horrible election. We do hear Clinton’s name mentioned quite often, as one character, Karin Gabriel (Gibson), an actress who was once married to the now deceased Thomas, discusses her one-woman show created entirely of Hillary quotes from speeches made as a young woman.  They all sound so inspirational, and I’m guessing had the election panned out differently, those quotes would have been heard from a more optimistic and happier stance by future audiences.  But that didn’t happen. The subtle optimistic edge to most of the play turned out to be, in the end, not dreadful, but a bit of a comfort, surprisingly.  It felt good to be surrounded by others who were just as upset and heart broken as I was and still am. 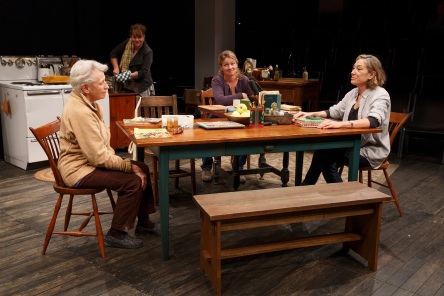 I must say that this experiment that Nelson is doing here is quite inspiring and intriguing. His multi-play structure is very similar to The Apple Family Plays, which revolved around significant days in American History and Election Nights between 2010 and 2013. Part one, That Hopey Changey Thing opened on Nov 2, 2010, on midterm election day.  Sweet and Sad opened on the tenth anniversary of September 11th in 2011. Sorry opened on November 6, 2012 during the 2012 presidential election, and the last of the four-part saga, Regular Singing opened on the 50th anniversary of the JFK assassination in 2013. All four of the Apple Family Plays featured basically the same cast, also living in Rhinebeck, N.Y., making dinner and discussing the world they live in. Much like the Gabriels triptych, although this family was not as financially challenged. It’s a beautiful structure for us to peek into the world of a troubled but real family, and listen in. To get to know them, witness them, and ultimately become enmeshed into their lives emotionally.

I was not fortunate enough to see any of these four plays nor was I able to see Part one of The Gabriels which is titled: Hungry but there is a chance I can slip into the first play when they present all three plays in repertory December 10 to 18. If not, I’ll have to track it down at the Kennedy Center in Washington, D.C., where it will also be presented in repertory in January of 2017, followed by an engagement at the The Perth International Arts Festival in Australia.  I’m not sure I want to fly off to Perth for a viewing, but just like the Gabriels, I wish that was my life.  But if you haven’t had the chance to meet the Gabriels, do yourself a favor, and save your money on the plane or train fare, and catch it before it leaves the Public. And don’t dread it.  Embrace it.