The Present: The Bang is Big but Not Deep

The Present: The Bang is Big but Not Deep

I was looking forward to fireworks on the stage of the Barrymore Theatre when Cate Blanchett, Richard Roxburgh, and the company of the Sydney Theatre Company made their Broadway debut. This stellar company has brought the play, The Present, all the way over here from Sydney via London, but little did I know just how explosive this show was going to be. Literally.  Revamped and updated by Andrew Upton, the untitled first play of a young Chekhov, as directed by John Crowley, is quite the wild ride at certain points.  But like any Chekhovian play, it’s also about boredom and frustration in that boredom, and in this ‘adaptation’ that directionless fog exists here literally and figuratively.  From the beginnings of a birthday dinner until the proverbial hangover the morning after, this overly long 3 hour play has a tremendous amount of endless chatter about their mutually shared apathy in the world, interspersed by a number of startling bangs to wake us up. Thankfully. Like any dinner party (or any play about a dinner party), sometimes the conversation peters out, and the evening festivities take a downward spiral. Sometimes it’s in the form of discomfort and an awkward silence, and in this play, those moments are treated beautifully as comic kindling. Other times, it comes in the guise of frustration or conflict fueled by alcohol and unsaid grievances, and in The Present, all of these are present.

A group of friends and family gather together at a grand estate to celebrate the 40th birthday of Anna Petrovna (Cate Blanchett) in the country house of her deceased husband, ‘The General’.  Blanchett is captivating in this central role.  Without her trophy-wife widow personae, this party would screech to a deadening halt.  She is the fuel and the fire. We can’t take our eyes off her, even when she is not meant to be the center of the action. During one captivating scene at the dining table, a small quiet action concerning her undergarment steals all our attention from the leading man’s endless speech. It seems to heighten her and our reaction to the droning on of others at the table. Rightly or wrongly, it works. She owns the stage and our attention as she has done on all the occasions I have been fortunate enough to see her (Streetcar Named Desire, Hedda Gabler at BAM and Uncle Vanya at the Kennedy Center in DC). It’s not to say the rest aren’t as accomplished, because they all are, but she is definitely flying high over the others. She is the hostess with the mostest.

Updated to a post-perestroika 1990’s Russia, although you’d never know it by the various accents (which resemble British or Australian at any given moment), nor by the garments worn or the dull white set they inhabit (a bland scenic and costume design by Alice Babidge), the guests that arrive for the party don’t seem to get along all that well with each other. The conversation is stilted at times, or hostile. They speak of a new Russia, post communist, trying to make a case for this play to be placed where it is meant to be, but it hardly seems the point. More often then not, the conversation is casual or personal, jarring in the quick shifts of style, tone, and topic. Slowly, as the interpersonal links become more apparent, it’s clear that there is a complex history amongst this lot, with a few surprises hidden in there as well. 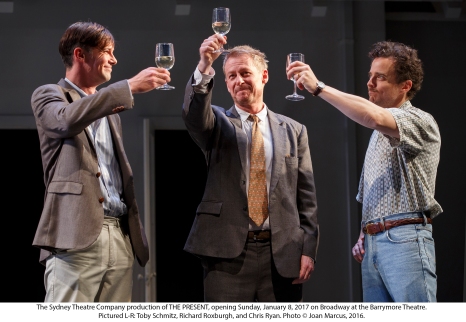 One of the feistier guests, Mikhail Platonov, (a splendidly enthralling Roxburgh – very deserving of the star billing he has with Blanchett), loves to rattle everyone’s chains, aggressively putting many of the guests on the defense. He is the older third of a band of male friends at the party, both of which are younger and under his tutorage many years ago when Anna first arrived as the young wife of the General.  Anna’s step-son Sergei (Chris Ryan) is the boyish and simple one of the group, desperate for approval, and Sergei’s childhood friend, Nikolai (Toby Schmitz), has grown up to become a doctor while still retaining his immature and insecure ways. These three men, all with their female companions; Mikhail’s wife, the giggly loyal and sweet Sasha (a detailed and wondrous Susan Prior), Sergei’s wife, the distant and complex Sophia (Jacqueline McKenzie, a bit too stiff and earnest), and Nikolais’ girlfriend, the beautiful and easily manipulated Maria (an underused Anna Bamford), talk of their strong male friendship, but we know this bond will be on trial by the time this party is over, mainly because of Mikhail’s need for adoration and validation.  Throw in a few older gentlemen, both, it turns out, are being eyed by Anna as a potential husband and possible financial savior, and the party is on.  Full swing. To the sound of The Clash, surprisingly. One of the suitors is the drunken father of Nikolai and late arriving Kirill (Eamon Farren), Alexei (Martin Jacobs), and the other a dull cold business man, Yegor (David Downer) who appears out of thin air with this arrogant and forceful son, Dimitri (a handsome but stern Brandon McClelland).  Oh, and then, there is Osip, (a dashing Andrew Buchanan) who is there at Anna’s request to complete a mysterious task,

which becomes all too clear very soon after. It is as complex as it all sounds, and dizzying. A few of these characters seem to be superfluous, adding only because they were written by Chekhov to be present at the party, but in this version, they only add to the confusion of the gathering. Even as we watch Upton bend over backwards to mix these last three in, they feel more like a Chekhovian concoction rather then a necessity. An invitation that should have been revoked.

Anna speaks of wine being served, over and over again in Act I, and with all the characters assembling, had I been a guest at this gathering, I would have been in need of a drink long before it eventually materialized. But once the wine finally starts to flow, we begin to get a glimpse as to what is in store. It feels like a pretty normative structure. Bring a bunch of people with history and relationships together for a gathering of some sort, throw in lots of wine and vodka, and sit back and wait for the explosion. It’s a classic set-up, but usually it comes with a deeper and greater pay-off: the bang here is big but not deep.

Act 2 is finally when this play starts to get interesting. We have moved from the terrace into a surprisingly dull white dining room. Nothing about the design gives us any semblance of wealth, style or taste, something that seems inherent in the writing of this play.  The dinner appears to be over, and the guests, at least some of them, have lingered on, despite stilted conversation. One guest, Kirill (a very modern and laddish Farren) has appeared out of nowhere, and it takes some time to figure out who he is and what relation he is to the others. Confusing at times, people appear and disappear without introduction or explanation, as if they’d always been there or we should just know somehow. Anna proclaims her boredom (very Chekhovian of her) with the world and with her dinner party. Enough alcohol seems to have been consumed by most that we

can feel the energy leading up to a confrontation of some sort.  The fuse has literally been lit, and it’s only a matter of time until all hell breaks loose. Happily for us, it is led by Blanchett’s firecracker of a character, an actress who can make boredom exciting, and we are all on board for this power keg of a party to explode.

Act III is a strange wasteland, which is as abstract and obscure as it is interesting. We are witness to the shambles that is left after the event.  Characters are running in and out, some real, some imaginary, I’m guessing. It’s a strange landscape, not at all in keeping with the rest of the play.  It’s the world seen through the eyes of a desperate drunk; messy, incoherent, and all over the place. As with the whole play, it’s not all that clear what this play is trying to say.  The true meaning lies deep in the fog that floats across the desolate landscape. 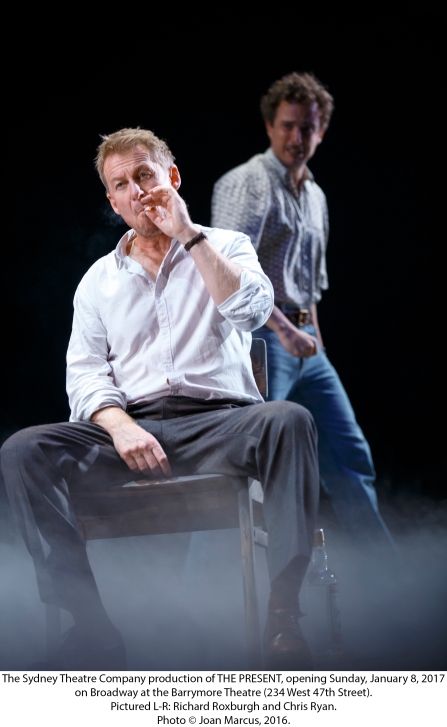 Not surprisingly, the most dynamic moment is when we have the two stars alone on stage.  Their chemistry is undeniable, as it was in their fiery production of Uncle Vanya that played at New York City Center.  Detailed and brave in their interaction, we find ourselves enraptured, and equally distracted and frustrated when they aren’t sharing the spotlight.

Finally, we limp our way into Act IV, and it truly feels like the hangover one would have the morning after this epic party. Strung out and a little edgy, rain falling outside, the pieces will fall as they must. Like most of this play, the action is drawn out and relentless. The excitement lies in the central figures. Blanchett once again, holds our attention even as the drama around her tries to take center stage. The two leads are like the host and hostess who hold it all together. Without them, this birthday would be a bore and a mess.  In some ways it still is, but the stars shine their light on us, dazzling us like fireworks in the sky.  Very exciting when they explode, and luckily, the memory of how they dazzle remains faintly in the sky.

Leave a Reply to The Liar: An Un-Warrented Knee Jerk Reaction to Rhymes | stvnross Cancel reply