Come From Away: On Broadway, Via Newfoundland

Come From Away: On Broadway, Via Newfoundland

I saw this magnificent show in Toronto last December.  And I was just as excited to see it last week on Broadway.  Come From Away is definitely one of my favorite new musicals of this year, and I’ve been talking it up to anyone who will listen.  When I speak of this show to someone who doesn’t know it’s about 9/11, the first reaction is shock; shock that a musical could or would be written about such a day, but Irene Sankoff and David Hein (Book, Music, and Lyrics), the talented Canadian writing team, have created a beautiful, respectful, and emotional version of that day and that week through the eyes of the residents of the small town in Newfoundland. All fears can be set aside. Completely.  Come From Away, the new musical has finally arrived on Broadway, and is one very specific and wonderful story of that infamous horrible day. It is a refreshing, warm, and very humane tale that attends to the lump that will be in your throat, and the tears of love and compassion that will run down your cheeks, by also putting a big grin on your face.  Not once do they mention ‘World Trade Center’, nor do they resort to images or descriptives that will upset, which I am grateful for, but this writing team does create the most musically lovely story about that day in the most humanly way possible. 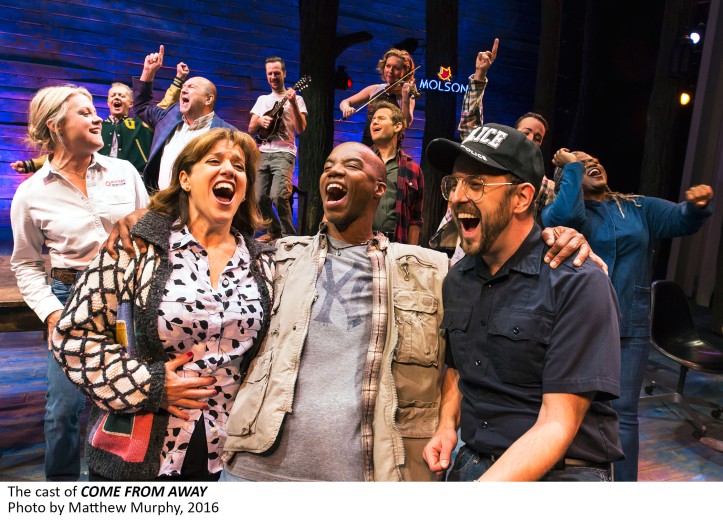 If you ask anyone where they were on that terrible day in history over 15 years ago, no matter where they were living in this wide, wide world, most remember, and will tell you their story.  I have one as well, standing on the corner of 26th Street and Broadway watching with others as the world changed before our very eyes. This 100 minute one-act musical, directed impeccably by Christopher Ashley (Memphis, Xanadu, Leap of Faith), tells the story of the townsfolk of Gander, Newfoundland. They wake to a beautiful and typical day in the life of these residents, drinking coffee at Tim Horton’s and arguing over the normal affairs of a small town. The wonderful “Welcome to the Rock” sets the stage of this very Canadian story we are about to hear, perfectly showcasing this talented company of actors, working seamlessly as a strong unified force.

As the news roll through the town, it becomes clear that this small town with one very large airport (dating back to a time when planes had to refuel before crossing the ocean), was going to be called into action. The airport will need to play host to 38 planes that were on their way to North American when all the airports were shut down.  The population of Gander was about to double in size in the next few hours, and the residents were going to have to figure out a way to accommodate this surge.  What this musical does so well, is give numerous different angles to how this town of residents and the new arrivals that have ‘Come From Away’ interact and deal within this difficult situation.  It’s powerful and enlightening, in a way that is unexpected and glorious.

This crew of actors truly shows us what it means to be an ensemble.  There is not one person who you would single out as a lead. Each actor has one or two important roles to inhabit, which they all do magnificently, with a great sense of detail and humor, while also playing numerous others.  Each time I think of one actor to spotlight, I think of another that is just a wondrous, engaging, and ever so real.  Astrid Van Wieren as Beulah, one of the Gander residents, and Tamika Lawrence (who was the understudy for Q Smith as Hannah), one of the passengers create the most touching and authentic bonds of care and love. Even writing about it now causes that lump in my throat to return.  Jenn Collela as one of the pilots (Annette/Beverly and others) has a beautiful solo, one of the only ones, “Me and the Sky“, that is quite the show stopper, mainly because of its power and simple beauty of a woman changing the rules. Lee MacDougall as the English passenger, Nick, and Sharon Wheatley as the Texan, Diane, are possibly the only other cast members who actually get anything close to a song of their own, with the touching “Stop the World“. But I wouldn’t say that they had any more of a focus then the others: Geno Carr (Oz and others),  Joel Hatch (Claude and others), Rodney Hicks (Bob and others), Kendra Kassebaum (Janice and others), Chad Kimball (Garth/Kevin T. and others), Caesar Samayoa (Ali/Kevin J. and others), and Petrina Bromly (Bonnie and others).  Each have magnificently funny and poignant moments of their own, filled with pain, love, humor, fear, engagement, and about every other emotional scenario that one could imagine. I could list a moment of true engagement with each and every one of this group, but I’m going to let you be as surprised with delight as I was (but the one that starts out as a hymn is so beautiful in style and content that it still stays with me).

Beautifully staged by the creative team of Beowulf Boritt (scenic design), Toni-Leslie James (costume design), Howell Binkly (lighting design), Gareth Owen (Sound Design), August Eriksmoen (orchestrations), Ian Eisendrath (musical supervision and arrangements), and musical staging (choreography) by wonderful Kelly Devine, Come From Away is one of the most singularly engaging new musicals to come to Broadway this spring. Musically, it’s gorgeous and sumptuous; so Canadian, so Newfoundlander. So perfectly written and performed by an uber-talented band, that we are more than thankful for the curtain call when they can truly shine.

Welcome to the Rock

This story is sure to pull at all of our heartstrings from beginning to end. It’s such a Canadian and global story, and I’m so pleased I was able to see it before on one of my many trips home last December, and so grateful to have the opportunity to see it again here, in my new home (23 years and counting). I think that this glorious musical is as affective on Broadway and almost anywhere else it will eventually play in the sure-to-come tour.  It carries a universal dose of humanity and warmth about a moment in time when these emotions were needed the most.  I’m thrilled that Come From Away has landed here in New York, and glad there was no delays or cancellations. It will get a hero’s welcome every time it lands. 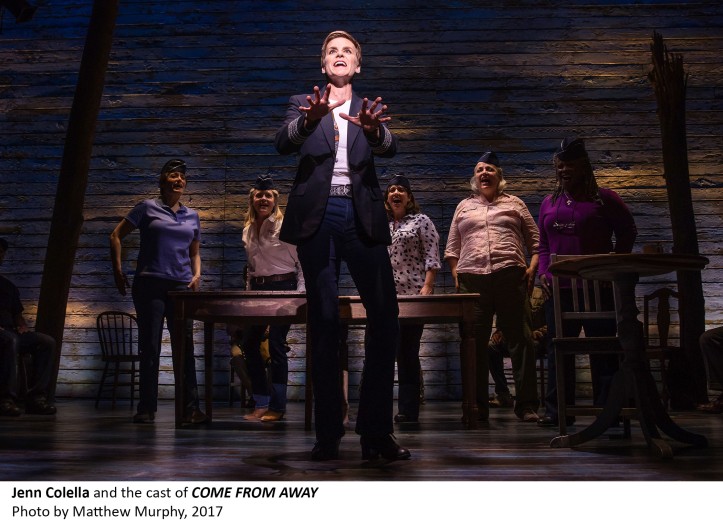