Tootsie The Musical: What She’s Selling, Most Joyfully, I’m Buying 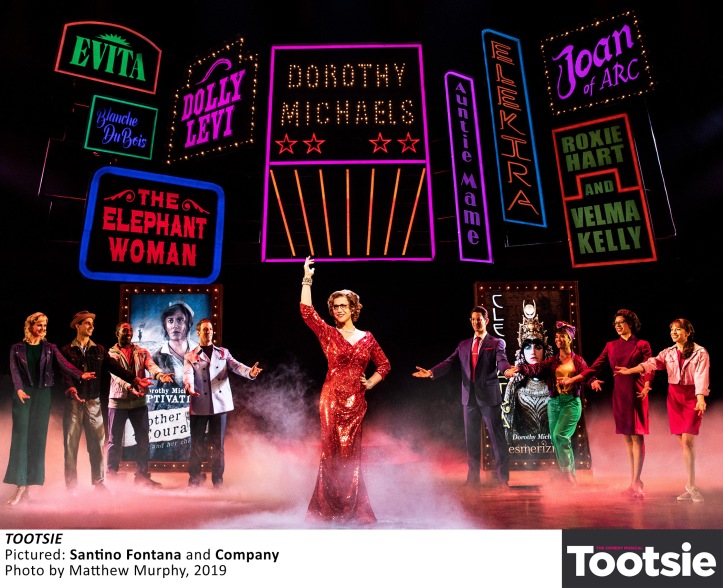 “Even the impossible is possible“, they say, and when word hit the Broadway streets that they were going to try to do a musical remaking of the classic movie, Tootsie, I thought, oh no. Please don’t. That impossible is just plain too impossible to get right. But somehow, in the movie to stage adaptation of that 1982 film that starred Dustin Hoffman, David Yazbek (Broadway’s The Band’s Visit), who wrote the music and lyrics, and book writer Robert Horn (TV’s “Designing Women“) found just the right fit, cur and fabric to make that dress work. They,  with director Scott Ellis (Broadway’s Kiss Me, Kate) and choreographer Denis Jones (Broadway’s Holiday Inn) have created one of the funniest Broadway movie musicals around. It’s pretty much comedic gold, and that’s no small feat. Pretty Woman and many others of its kind failed at the task, with a creative team thinking they shouldn’t or couldn’t mess at all with the structure or story, but much like the equally funny Beetlejuice The Musical, these characters had the guts to focus on the positive and find an authentic base to build a real musical on top of. Just like the wise Dorothy Michaels, they knew how to take something that could have been a disaster, and make it fly. 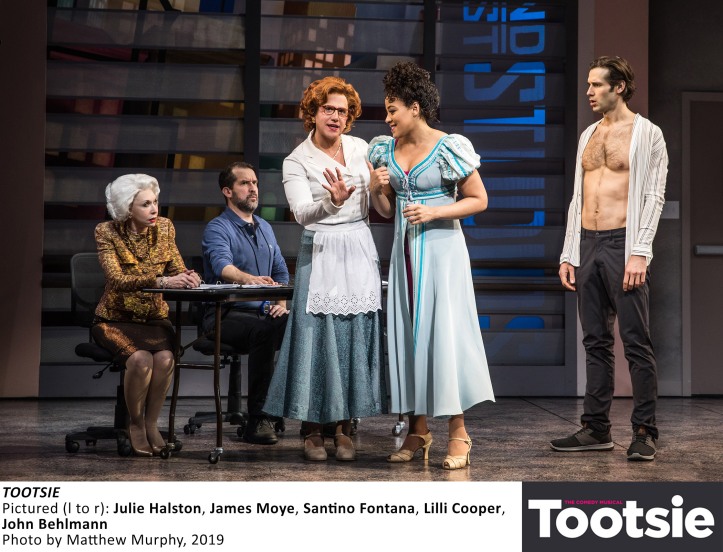 It all starts so beautifully with an audition medley that lays the groundwork for everything to follow. “I like what she’s doing” up on the Marquis Theatre stage, with the tremendously talented and flexible Santino Fontana (Broadway’s Cinderella) taking on the role of a lifetime as that difficult to work with, out of work actor Michael Dorsey, who desperate for some theatrical validation, disguises himself as a better working woman, Dorothy Michaels (Pickle Barrel Dinner Theater and Bate N’ Tackle’s Othello), than he is as a man. It’s a set up perfectly stitched for the current #MeToo movement, with quick and smart one liners that say it all. Prompted by a list of things to accomplish by the age of forty, the troubled and desperate Michael puts on a dress in order to find the break he is in need of, and discovering a number of things beyond the straight forward and obvious.  He also discovers and falls off his sensible heels for the young and very pretty Julie Nichols, sweetly played by a charming Lilli Cooper (Broadway’s SpongeBob…), who is in need of some honesty and care.  She’s struggling with her own actor self as she takes on the lead of a poorly conceived musical helmed by the narcissistic theatre director, Ron Carlisle, wildly played by Reg Rogers (Broadway’s Present Laughter) doing his best Robin Williams/”Bird Cage” mash up with flap-happy success. Not helping within the ridiculous revamping of the Romeo and Juliet story-turned alternative musical, the slightly underwritten leading lady has been cast opposite the hopelessly no-talent reality tv personality/actor Max Van Horn, wonderful portrayed by the adorable John Behlmann (Encores’ 1776). He’s “not my type, even on tequila” (wink, wink), but he delivers the prize with a hilariously smart and infectious number in Act 2, “This Thing“, that literally tears down the place with its innocent tattoo’d ridiculousness. Filling out the backstage storyline, we are gifted with the very good Michael McGrath as talent agent Stan Fields, and delivering some of the funnier feminist lines is the gloriously gifted Julie Halston (Broadway’s On the Town) as producer Rita Marshall. A Pure joy to behold.

So in that is where the problem, albeit not a huge one, lies. None of the more serious songs telling the emotional stories of Michael and Julie are obviously catchy or carry a hook that stays with you once you leave the theatre (I must admit, I was still humming one of the songs from the much more brilliant Hadestown as I took the subway home that same night). That isn’t where the wiseness and fun of Tootsie resides. It’s in the emotional hilarity of the sidekicks where this show does its best to not fuck it up. “Let me rephrase that“…, it’s in the comedic portions and songs, and there are a number of fantastic hits there, where we find all the love in the world for Tootsie and crew. “What’s Gonna Happen“, sung by the Teri Garr replacement for Sandy Lester, the wildly wonderful Sarah Stiles (Broadway’s Hand to God), delivers the show stopper of the night, with a very deserving Tony nomination attached. It’s a performance of insecure perfection, selling her situation as brilliantly as does Andy Grotelueschen (Fiasco/RTC’s Into the Woods) as roommate Jeff Slater and his brilliantly funny Act 2 opener, “Jeff Sums It Up“, recapping the desperate shenanigans Michael has donned as tightly as that iconic red sparkly dress, courtesy of the master himself, costume designer William Ivey Long (Broadway’s Beetlejuice). Both, along with “This Thing“, are spellbindingly whip smart and hilarious, and both deserve our fullest praise.

This movie to musical recreation delivers an “Unstoppable” barrage of hilarious setups, one liners, and moments that will make you laugh out loud with a wise glee. The scenic design by David Rockwell (Broadway’s She Loves Me), with lighting by Donald Holder (Broadway’s My Fair Lady) and sound design by Brian Ronan (Broadway’s The Prom) is pretty standard fare, to be honest, giving you a stock New York skyline backdrop and a straight forward center stage blocking by Ellis and Jones, that gets the job done. The look is pure obvious Broadway, but lacks an inventive moving forward style that would have taken this very funny show over the top. The music director and supervisor Andrea Grody (Public Works’ As You Like It) with orchestrations by Simon Hale (MCC’s Alice by Heart) deliver the peppiness and spirit that is needed, (“I know, I do that“) thankfully, bringing us all the joy and fun that Tootsie‘s Dorothy would approve of.  It won’t change the world, but it might change how musical theatre sees classic movie remaking. At least with this movie musical, Tootsie didn’t drop it. And Fontana might never be able to delivery that line about Tony again, without a standing ovation.