Beetlejuice Knocks Us Up For a Hilarious B&W Stylistic Loop

You don’t need to say “Bravo” three times in order to get the full effect of the wildly entertaining new Broadway musical, Beetlejuice. You just have to sit back and be surprised, tickled, and over-joyed with ghoulish glee. That’s all because of the energetic dynamo Alex Brightman, reclaiming the Winter Garden Theater stage throne like he did back in 2015 in School of Rock, for which he was nominated for a Tony Award for Best Actor in a Musical. The new film-to-stage musical revisioning, of which there are many this season, is based most wisely on that iconically dark and funny 1988 movie which starred Michael Keaton, Winona Ryder, Geena Davis, Alec Baldwin, Jeffrey Jones, and most importantly, the comedic goddess Catherine O’Hara (who can rest easy, as no one would dare play a part she ruled so thoroughly). Beetlejuice: The Musical. The Musical. The Musical. does everything that it needs to do “Invisible“-y in about the first ten minutes, surprising and knocking us down with its wit and darkly fun play. And that’s quite the feat when you know the source material.

The first scene is thrilling and beautifully crafted, reminding us quite clearly that we are in a Tim Burton landscape, thanks to the spectacular (and assuredly Tony nominated) scenic designer David Korins (Broadway’s Hamilton), with exacting and hypnotic lighting by Kenneth Posner (Broadway’s War Paint), fantastic sound design work by Peter Hylenski (Broadway’s Frozen), and perfect projections by Peter Nigrini (Broadway’s Dear Evan Hansen). But the scene also throws us off, with a funeral scenario that doesn’t quite bring up a plot point from the movie. It sets us off-balance, and then, with a flash and bang, the show about death does an upfront about-face, “Holy Crap” is the least of it, when it comes to language and ballads, and with Brightman frantically leading us through this particular nursing home for sad cats (that’s a compliment), the games are just beginning. 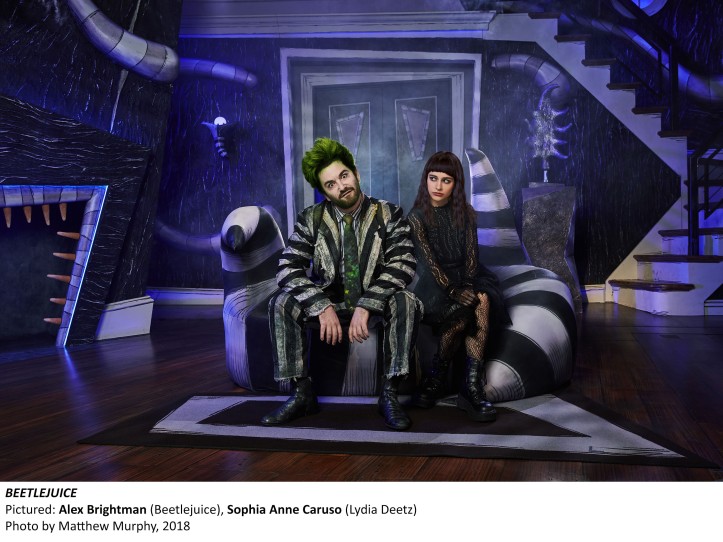 “The Whole ‘Being Dead’ Thing” as directed with a great big dead spirit and sass by Alex Timbers (Moulin Rouge!) with perfectly demented choreography by Connor Gallagher, finds all the silliness and joy within. This team of two, just like they did in the wonderfully fun Robber Bridegroom, parcel it out with glee for us all to enjoy parading the darkness and light with style and playful humor. Sophia Anne Caruso (NYTW’s Lazarus) gives us a perfectly dark Lydia that has just the right roughness in her rock voice to deliver us to heaven or to hell. While mourning “Dead Mom” in full demented black, courtesy of the perfectly deadly and delicious costuming by the legend himself, William Ivey Long (Broadway’s Prince of Broadway), she presents the new idea of displacement and unhappiness with a sweet snarl, and sets up the collision between the good dead parents, and the bad live one with ease.

With catchy and smart music and lyrics by Eddie Perfect (Strictly Ballroom, King Kong), and a solidly funny book by Scott Brown and Anthony King (Gutenberg! The Musical!), Brightman roars and rides high, hitting all the right notes and stupid jokes with banjo splitting ease. He’s the bad uncle that should never get invited to a party, let alone three times in a row. In counter-balance, we are gifted with the wonderfully talented duo of Rob McClure (Broadway’s Noises Off) and Kerry Butler (Broadway’s Mean Girls) as the sweetest dead couple you will ever meet. Barbara and Adam meet their maker early on, as expected in a playfully perfect manner, singing “Ready, Set, Not Yet“, but unfortunately for these two stellar performers, they aren’t given all that much to do beyond the grave. Their internal relationship is kind, strong, and connected, but the one with Lydia never finds the deep maternal bond that it needs by the end.  They try, gosh darn it, to be funny and endearing, and they are, especially during “Barbara 2.0“, but in comparison to bad distracted father Charles, played a bit too cautiously by Adam Dannheisser (Broadway’s Oslo), the need isn’t strong enough. But luckily we are given the delectable Delia, life coach to Lydia and paramour to dad, portrayed to the heavens by the delicious Leslie Kritzer (Broadway’s Something Rotten!), who elevates all she is given. “Buy more crystals” she whispers, and we can’t help but lean in and laugh.

Kritzer’s Delia almost steals the show away from Brightman, bringing more exaggerated hilarity into the room in every little gesture and smile than one could ever imagine.  She is matched, pretty much, by Jill Abramovitz (Broadway’s Fiddler) in the too tiny and too busty role of Maxine Dean, 5th wife of Maxie Dean (Danny Rutigliano). The face and the body don’t give up, but the small role can’t compete with Kritzer as Miss Venezuela. “What I Know Now” is that her number as the liveliest drop dead contestant around is a show stopper, with a feisty Girl Scout (Dana Steingold) with a heart condition coming in just behind her. Both their numbers are pure pleasure, and with strong musical supervision, orchestration and incidental music by Kris Kukul (Public’s Joan of Arc), song after festive song hit their mark joyfully and hilariously.

The only problem with the music lies in the ballads that are pretty but no match to the wickedness and frivolity.  Caruso has a stellar voice, ringing true like a rock star, but the big “Home” is where the heart is ballad that comes mid-way through the stodgier second act sounds like it should be the big Broadway moment, but lacks connection and depth.  Like most of the moments within the story, musically and otherwise, thanks to the fun and inventive work by puppet designer Michael Curry (Broadway’s The Lion King), special effects agent, Jeremy Chernick (Broadway’s Oklahoma!), and Magic and Illusion master, Michael Weber (Broadway’s Angels in America), the fun pops big and loud in Black & White strips. The ridiculously funny songs nail the mood and the flavor with ease, but when heart-strings are attempted to be pulled, the tug isn’t that hard or well crafted. The “Dance Break” works wonders teaching us that “More of Me” is always better and that sometimes puppet shows can be sad. But this movie turned musical is nothing close to sad. Beetlejuice is full throttled riotous fun, and shouldn’t be missed, whether a fan of the movie, or not.  Your heart won’t be twisted, but your funny bone will get worked out until death, just the way Beetlejuice would want it. And that’s a pretty awesome place and way to go in Tim Burton-land. 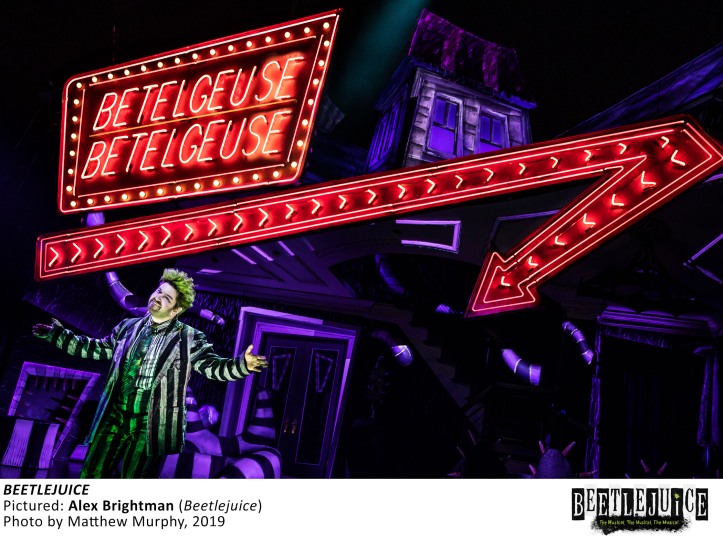