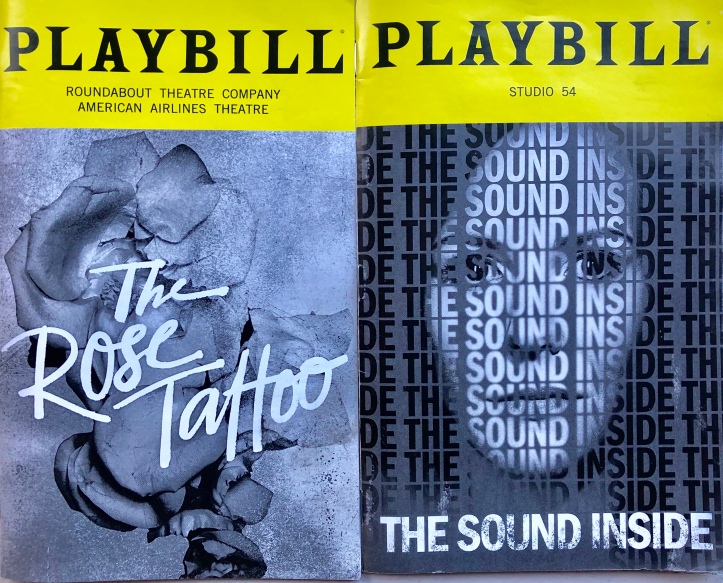 The Reviews: Roundabout’s The Rose Tattoo & Studio 54’s The Sound Inside

It was going to be a big long Wednesday embracing the crazy life of being a theatre reviewer on Broadway. Two strong female-centric dramas to take in; one revival of a classic, and one new play transferring onto Broadway after a brief run at the Williamstown Theatre Festival. Both starring incredible actors portraying center stage, stunningly interesting women being challenged by life, death, and dilemma. I walked in with high hopes, pleading with the theatrical gods not to be disappointed. Mary Louise Parker, the star of Adam Rapp’s The Sound Inside, has rarely let us down and who I loved so very much in MTC’s Heisenberg, and Marisa Tomei, the star of Roundabout‘s The Rose Tattoo, who was simply the best thing in Ira Sachs’ beguiling film ‘Frankie‘ that I was lucky enough to catch at TIFF19. They both create seamlessly something dynamic and powerfully intense within each character they inhabit, but only one of these two stellar actors found themselves enmeshed in a production that was simply and quietly one of the best things I’ve seen in a long long time. The other, I’m sad to report, found herself trapped in a confusing mess, surrounded by flamingo’d chaos, attempting to keep her head above the wild waves while everything around her sinks into the quick sand of misdirection.

Basking in the hallowed spotlight, the perfect formulation of Bella, deftly portrayed by the magnificent Mary Louise Parker (“Angels in America“) slowly fills in the tense details of what lies ahead in The Sound Inside.  Is she writing her new novel, speaking it out loud to the tree gods for approval, or is she telling us her tale so we may understand or collude with her? Or is it something more obscure? It’s hard to tell. In someways, “you don’t want to know, or you just don’t know” is the only possible response that one can truly give.  That’s the quandary where we find ourselves. Balancing on one of the most beautiful wrought entanglements, we navigate a thin line of understanding hidden in the layers upon layers. Is it all just creation, or a story of truth and confession?

Parker slips in quietly, tasking us to keep up and give in. She’s just “so good, it enrages me“, expanding our vantage point outward and inward all at the same time. Freeing up the “velocity of thought” with the inevitable is what is on hold within Adam Rapp’s (Nocturne, Noble Gases) delicious new play, The Sound Inside, and as directed with sure footed wisdom and expertise by David Cromer (Broadway’s The Band’s Visit), the piece floats forward in segments, delicately ushering in the ideas of encapsulated loneliness and the acceptance of praise that resides within, ever so quietly. Parker gives us a complication that grabs hold, even as she stands alone on a bare stage holding only a pen and a pad of paper, tasking us to weigh in.

The dynamic elegance of the floating pieces, designed with an impeccable eye for distant focus by the dynamic Alexander Woodward (Yale Rep’s The Moors), with detailed costuming by David Hyman (PH’s The Treasurer), incredibly subtle, yet intense lighting by Heather Gilbert (Steppenwolf’s Bug), and engaging music and sound design by Daniel Kluger (PH’s I Was Most Alive…), draws us in without pushing or prodding. “You can ask me something else“, states the defended and uncomfortable, as the performative nature of an intimate conversation told in a narrative structure keeps us guessing where we truly are standing and where we are going. It never gives it away, nor holds our hand as we move forward into the unknown, and it is all done with such strange intimate power. 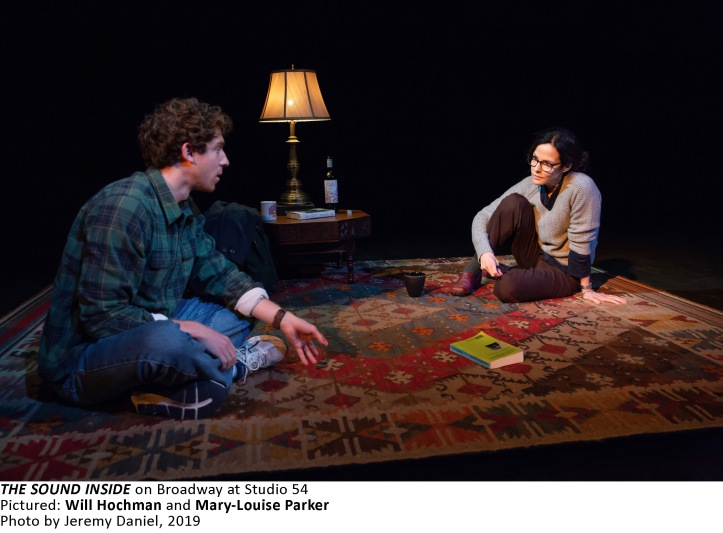 It’s truly captivating, and you can’t take your eyes or ears off her for a moment, that is until the diabolically designed Christopher, beautifully embodied by the tremendously talented Will Hochman (CSC’s Dead Poets Society) makes his appearance, without an appointment. He’s blown in, as if from a cold snowy field to shift the life of a professor who didn’t know she needed the jolt. She nods, as only Parker can do, giving us more illumination in that one gesture than most can give in a soliloquy. And Hochman rises to her challenge, giving us a character of undeniable complications that unsettles and intrigues. His ‘Old Yeller’ reduction and his storytelling of a young man’s train ride journey into internal discovery stops us in our tracks, just as it does to the unexpected Bella. We can’t help but want to look deeper into that painting, or sneak a quick peek to the next paragraph, desperately wanting to understand, while enjoying the unknown and the unexplained. 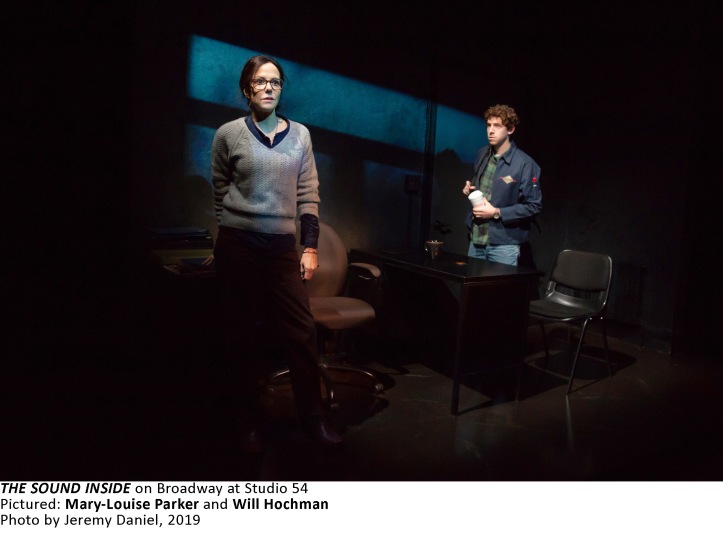 The two come together in a (Tony deserving) way that will haunt your imagination as you try to make sense of the imagined. “Count to 30“, and tell me, as “I have no idea what it means“. Yet, I do have my own conclusion, but it doesn’t have to be the right or only one. Which is just so much more perfect than an obvious idea told loudly or energetically.

Which leads me, unfortunately to Roundabout’s revival of Tennessee William’s The Rose Tattoo. It all begins, melodically, seeping itself in on the vocal wings of maternal Italian passion and unique opinionated southern sensibilities. There’s something wild and charged in the air as it crashes down onto the Gulf shores, making it difficult to swallow a broken beating heart. Against a dynamic background panorama of waves and stars, the setting feels hot, crowded, and erotic, giving a big overdone nod to Marcello Mastroianni and his memory-based “8 1/2“. The madness and the eccentricity runs rampant in front of a flock of plastic pink flamingos planted and trapped under a tangle of electrical power lines. The setting feels more Sicilian than Southern, and as directed by the usually unflappable Trip Cullman (Broadway’s Lobby Hero), the attempt to find the juxtaposition of humor inside the heartbreak brings an overwhelming cacophony of energy that implodes within itself on that overly busy set designed with questionable symbolism by designer Mark Wendland (Broadway’s Six Degrees…).

This revival of The Rose Tattoo, which originally premiered on Broadway in 1951 at the Martin Beck Theatre (now known as the Al Hirschfeld Theatre) winning the Tony Award for Best Play, falters in its search for the unexpected comedy within Williams’ southern twang. It is cluttered and loud, when it should be engaging and intimate. All I really wanted was to see Marisa Tomei (Broadway’s The Realistic Joneses) bring her usual undeniable authenticity to the role of Serafina Delle Rose, an electrified woman, so deep in mourning that she has withdrawn from the world around her after her husband’s untimely death. Her loss comes head to head with her daughter, and the passion of the Italian heart that forever resides deep in the blood of the Rose women. The part won Anna Magnani, opposite Burt Lancaster, an Academy Award when the play was adapted into a 1955 film (directed by Daniel Mann), and a Tony Award for Maureen Stapleton who originated the role in 1951 and starred once again as Serafina in the 1966 revival.

The original production won Eli Wallach a Tony for playing the young sensual truck driver, Alvaro Mangiacavallo, who happens upon the grieving widow after a mishap on the road. He doesn’t see the symbolic black veil over her head, but rather embraces and teases out the burning desire that still lives inside her. Here, at the American Airlines Theater, the red-blooded man is wholeheartedly embodied by the sexually charged Emun Elliott (The Garrick’s Red Velvet), who is, by no means, the clown-faced man he is often referred to as. Somewhere in the directorial choices made, he has been weighed down with the clown mask and role to act out since his sensual face does not resemble one. Their interactions border on clumsy romantic comedy, rather than unhinged eroticism just panting at the door to be released. It’s a shame, as there is an essence of something else more simple and animalistic lying just underneath the surface desperate to unleash itself into the bodies of these two sensual beasts, but the forces of the erratic crash up against the tragic loss-filled urn, and shatter the premise to pieces.

Something not so harsh could be said about the romantic entanglements of her daughter, Rosa, gently played by the sweet natured Ella Rubin (“Billions”) and her sailor man, Jack, uprightly portrayed by the handsome Burke Swanson (SCTC’s Hamlet). They find an innocent passion that, even when it feels rushed in and off the stage, resonates authentically somewhere along the Gulf Coast between New Orleans and Mobile. Embodied in the overly produced character of Estelle Hohengarten, forcibly portrayed by Tina Benko (ATC’s Describe the Night), and the disparagingly downward gaze of the Southern lady establishment that lives inside of Miss Yorke, perfectly and reproachfully played by Cassie Beck (Broadway’s The Humans), The Rose Tattoo gets pulled back into the heartland where this tale is meant to be housed.  Returning it to its sandy shores, where to dichotomy lives and breaths in the gossip of neighbors.

I’m not sure what the video waves and the herd of plastic pink flamingos represent in regards to the playwright’s legendary pain, poetry, and passion of Serafina, beyond being equally as overpowering to the cluttered and off-balanced stage. But the costuming by Clint Ramos (Broadway’s Slave Play) works well, even in its overly dramatic use of Sicilian fashion, giving into the detailed atmospheric lighting by Ben Stanton (Broadway’s Fun Home), engaging original music and sound design by Fitz Patton (Broadway’s Three Tall Women), and compelling but pointless projection design by Lucy MacKinnon (Broadway’s The Lifespan of a Fact). The production feels forced and too busy with the kinetic energy of screaming children and nosy neighbors, trying to desperately to find the wit in the water rather then the passion in the blood stream.

I wish I could say the long day of introspection and heart break would have ended on a better stronger note, but the two leading ladies didn’t disappoint.  Tomei had to struggle against a troubling application of The Rose Tattoo in order for her to showcase her talented wisdom of characterization. Parker, on the other hand, had the glory to be located fully in Studio 54‘s The Sound Inside, a play that is firmly and meticulously wrapped in honesty and abstractionism, leaving us hypnotized and tantalized that something so quiet and thoughtful could so fully captivate. So tell me now Christopher, “can you accept the praise?”