The All Too Human Humans 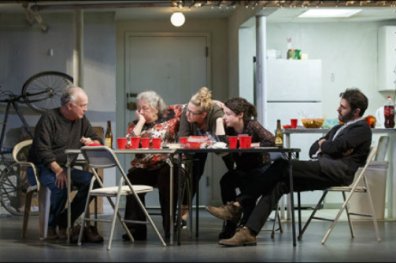 The All Too Human Humans

Having just had my Thanksgiving weekend, I thought it was about time I wrote about another Thanksgiving dinner feast that I saw a few weeks ago at the Laura Pels Theatre. It was Stephen Karam’s realistic family drama, The Humans, a Roundabout Theatre Company’s production, lovingly directed by Joe Mantello. And even though I’m a Canadian in the US of A, I have embraced the American Thanksgiving tradition.  The family unit has been replaced by my NYC friends as family but the dynamics are all around me.  My family does the same thing though, at Christmas, at Canadian Thanksgiving (in early October), but having lived in the USA for over 25 years now, I have learned that over here this is a bigger and more fuel filled family event then I was ever a part of in my family.  And this play is a very pure telling of the dynamics of your run of the mill middle class family, and what a holiday gathering like Thanksgiving creates.

The Blake family has gathered in the newly acquired, but not yet furnished, Chinatown basement two-story apartment of the not-yet-married daughter, Brigid (Sarah Steele) and her grad student boyfriend, Richard (Arian Moayed).  The parents, Erik (Reed Birney) and Deirdre (Jayne Houdyshell) have driven in from Scranton bringing along the wheelchair bound Fiona “Momo” Blake, Erik’s mother, (Lauren Klein) who suffers from dementia; brilliantly muttering and throwing fits throughout the evening.  Also in attendance, is the newly single lawyer daughter, Aimee (Cassie Beck). At first this play follows the path of so many traditional modern tellings of middle class family interactions that we have become accustomed to in holiday movies (a perfect example: 1995’s Home for the Holidays and 2005’s The Family Stone), the uncomfortable jabs at the unmarried daughter and the sarcastic and sometimes hurtful return jabs aimed at the silly mother, to name just one of the many interpersonal dynamics.  I’ve seen this movie before, the unkind way we can at one moment say something cruel to a loved one, and then say how much ‘family means’ in the next breath. So I settled into my seat half expecting to know how this will play out as it goes forward towards dinnertime.

But something changes.  The light bulbs start blowing out, mysteriously, one at a time.  The already sunlight-less apartment (perfectly designed by David Zinn and light by Justin Townsend) slowly gets darker and darker, and so does the mood and the stories shared.  It turns out that life is a lot harder then it first appears for the Blakes.  The world has not been kind to this family, but yet it also doesn’t feel extraordinarily cruel either.  It feels very real, very difficult, and timely. The father, who first appears to have made it through, maybe is the one most failing in his quest for the American dream and retirement, and he must come clean to his children.  And he is not the only one in this family who needs to fess up to their reality.  This isn’t the picture perfect movie family that we are usually privy to in those holiday films I mentioned before.  These people are living a rougher life then imagined but not a tragic one.  There is disappointment and shame, discomfort and sadness in their lives, but it all feels very real, very possible, and very close to home.

The cast shines in this real and sometimes harsh light, especially as it literally darkens around them.  Houdyshell and Birney are truly magnificent in their roles as troubled humans as parents.  They excel at sharing with us their shame, their fears, their discomforts, their immense love, and their strong attachments to their family.  I also particularly loved the two daughters.  The complex and detailed way that Steele and Beck interact as sisters and as daughters felt so honest and authentic, I was hypnotized.  Same could be said for the other couple on stage, the unmarried one (Steele and Moayed).  The ever-so slight movements, glances, and subtlety in their performances felt very pure and natural. All the actors made us truly believe in the connectivity of this family, which in turn made us love and feel for them.

And as with all family gatherings, the time comes when the family must leave and return to their other lives.  Oddly enough, this was the only part that didn’t feel authentic.  They asked us to believe the meal was over when it appears to only have begun.  This took me out of the realness of the moment.  Where was the over-eating of a turkey dinner followed by the over-abundant dessert choices.  Where was the “I’m too stuffed but I’ll have one more piece of pumpkin pie” routine?  The play seemed to speed through this part of the dinner, and too quickly the actors started to leave the stage, and this family started to disassemble.  It felt rushed and unfinished.  I felt a bit lost and confused as they rushed to the ending while also, in the same moment, taking too much dramatic time with the very last visual.  Was I missing the big meaning or payoff? Cause I left that Thanksgiving dinner feeling underfeed, unsatisfied, and still a bit hungry, like I missed out on the dessert.  I wanted my pumpkin pie.