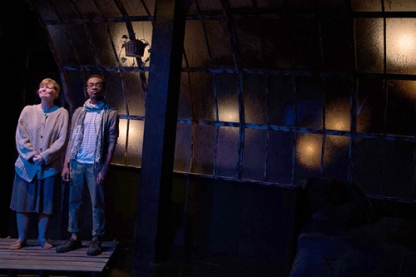 After a stressful and much delayed travel day from NYC to Chicago (see Instagram link: https://instagram.com/p/BIvmrtwhAox/ ), I arrived at the Steep Theatre Company, a company I had never had the pleasure of attending before. I’ve quite enjoying my Chicago Theatrical Adventures over the past few years, hitting new and different theatres and/or theatre companies. The theatre scene in Chicago reminds me of my college days back in Toronto. All the diverse and amazing theatre companies, big and small, showcasing exciting and innovative theatre from around the world. It’s impressive.

The Steep Theatre Company is just one of them and I’m glad to have discovered it. Situated right beside the Berwyn Avenue Subway station under the talented direction of Robin Witt is a small but criticially acclaimed theatrical troop which prides itself on its “hard-hitting, finely tuned ensemble work” and the glee with which they dive into “bold new territories of story and performance”. But the main draw to Steep was the marquee name (at least a marquee name in my world) of Simon Stephens, a British playwright who time after time has delighted me in such hits as the Tony winning best new play of 2015, The Curious Incident of the Dog in the Night-time (https://frontmezzjunkies.com/2015/11/09/curious-again-for-the-third-time-about-that-incident-of-the-dog-in-the-night-time/), the off Broadway hit and soon to be on Broadway transfer, Heisenberg (one of my favorite things of last season: https://frontmezzjunkies.com/2015/12/30/my-top-ten-theatrical-moments-2015/ ), and the new adaptation of the book and lyrics of the National Theatre’s Three Penny Opera (https://frontmezzjunkies.com/2016/07/30/three-penny-opera/); all of which I feel very

fortunate to have been able to see. And although this is a new play for me, Wastwater is actually from 2011 and was first performed at the Royal Court Theatre in London. So here I was, sitting in this delightfully intimate theatre in the Andersonville neighborhood of Chicago, waiting with anticipation for hopefully one more witty (and possibly dark) play, drenched in his smart fast dialogue and, from what I hear, dripping in discomfort and dread. Lucky me.

This devistating play certainly is soaked in intimate and impeccable one-on-one emotional dialogue. Made up of three pairings of characters, each of which are expertly performed, these damaged souls expose their shameful truths and emotional baggage to the other on the cusp of a difficult moment of change in their lives.  They are all at a crossroads in their lives as they take in the view of a small town that at one moment of time was going to be demolished for a new runway at Heathrow Airport. It’s a dangerous world we live in, I’m guessing Stephens is saying. One moment we are here, and the next we might be destroyed. And it’s not very much in our control.

Although Wastwater is named after the deepest lake in England, it is not the lake that is referred to within the play exactly (I believe).  It does symbolically represent the depth and darkness that is presented in this 100 minute long play as this lake is famous for its many diver deaths and most notably, in 1976, Margaret Hogg was murdered by her husband and deposited in the lake, only to be found years later, preserved like a wax figure due to the lack of oxygen in the lake’s water. There are other possible sinister stories that are hidden deep below the surface, disposed and preserved; never to see the light of day.

The first scene of Wastwater involves a troubled young man, Harry, played beautifully by Joel Boyd, who, after a difficult youth is about to venture out into the world leaving behind his heart-broken foster mother, Frieda.  Played exquisitely by Melissa Riemer, Riemer expertly balances loss, love, and understanding without getting creepy or overly melodramatic. Frieda has been through this before but this time it seems to be hitting her harder. One has to wonder why this time is so different?

One timely and complex detail Stephens throws into the mix is the idea that in the midst of trying to communicate with one another, mobile devises, technology, and computers in general distract us and damage our connections and in some ways, our lives. In this first scene, Harry’s mobile phone keeps buzzing and distracting him, much to the aggravation of Frieda.

The second scene, once again starts out on the sweet side, as a woman and man find themselves in an airport hotel for a romantic rendez-vous. But as more details are spoken and more truths revealed to us, and more importantly to one another, we start seeing the complex destruction around them. Kendra Thulin as the married woman, Lisa (less details here, the better), with a complex history and an even more dark present, has come to this hotel room to start an affair with a married art teacher, Mark, most winningly (and handsomely) played by Nick Horst, who also has a few secrets and desires submerged down inside him. Videos and computers once again raise their ugly heads and cause disconnection in that hotel room, but Stephens adds another layer into the already murky waters. All the characters appear to have thread-like connections to the other characters, but what does it all mean? Mark taught a favorite student that died in a drunk driving accident that Harry spoke of and feels responsible for in the first scene.  Lisa’s connection though is more difficult to piece together, although a thin line might be drawn to the sinister characters in the third and final scene.

The third dyad delves deeper into the dark depths as the character connections become more pronounced.  The woman, Sian brilliantly performed by Caroline Neff, was also under Frieda’s care, and we know from what Frieda says in the first scene, that she was a difficult foster child to deal with. And we see it now, as she intimidates and terrorizes the older man, Jonathan (an assured and perplexing portrait by Peter Moore), who has arrived to engage in some sort of illegal activity involving smuggling in a child from the Philippines. Is this child trafficking of a sexual nature? Or something less disturbing but still sinister? Or possibly not. I’m not entirely sure. But Jonathan does have a thread of connection to Mark, the character in the second scene. Mark was slapped by school teacher Jonathan when Mark was just a student; a slap that cost Jonathan his job. This third scene is by far the darkest and most upsetting to sit through, but many questions and answers are left up in the air. Especially those of connectivity and implied meaning.

I’m not sure what my walk-away emotional state was after this play wrapped up. I was disturbed for sure but a bit perplexed about the overall meaning. The world, although connected thinly to one another, is a dark and dangerous place where certain truths and shameful secrets are shared and hidden in the dark depths of our souls.

Technology is certainly not helping save us from ourselves and our world, a notion I hear about daily in my real job (yes, I’m a psychotherapist by day, not a theatre blogger). Stephens writing of dialogue is as precise and intricate as ever, (which is one of the main reasons I strongly recommend seeing Heisenberg when it is restaged on Broadway this fall: https://frontmezzjunkies.com/2015/06/12/werner-would-be-proud/ ), pulling us in completely and making us think and contemplate more then what’s being presented. I just wish I had a better sense what he was attempting to say in this piece beyond the generalizations that I suggested earlier. Stephens definitely seems to be obsessed with the murky and filthy interior landscapes of the human mind, but doesn’t seem to feel all that responsible to provide us with a cathartic moment at the end. I guess I wanted those threads to be stronger and thicker, the meaning more specific, and the water not as deep and dark, so I could at least see what’s going on at the bottom with a bit more clarity. 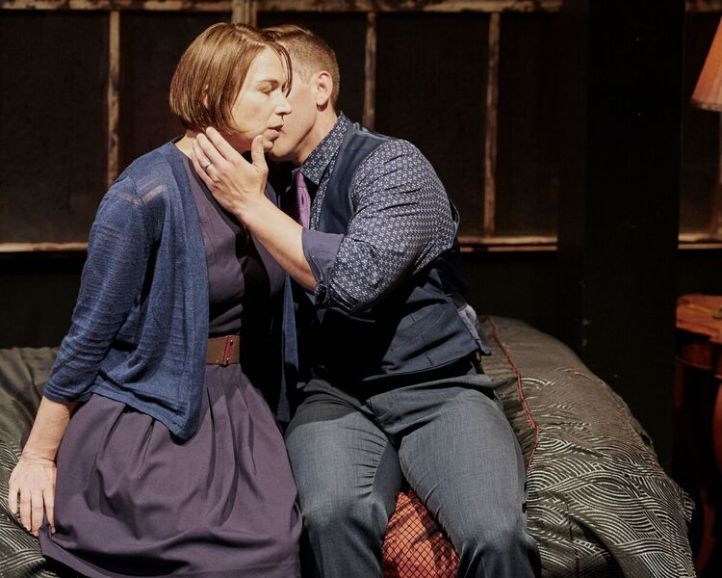