Curious Again, for the Third Time, about that Incident of the Dog in the Night-time

Curious Again, for the Third Time, about that Incident of the Dog in the Night-time

So the sister was in town visiting from Canada, and she wanted to see some theatre. I sent her a list of what, in my humble opinion, is good and what’s great on Broadway. She picked a list of some pretty amazing shows, all musicals, (she is of course related to me, so all of this is no surprise), but I thought I would try to lead her down at least one other road, theatrically speaking, maybe towards a play, maybe a great play, like The Curious Incident of the Dog in the Night-time. “It won the best new play Tony Award last year!” And she went for it. And tickets were purchased.

(On a side note, I tried to sell her on Fun Home, last years amazing best musical Tony Award winner. “A lesbian comic book writer’s coming out story to a closeted gay father after growing up in a funeral home, with devastating repercussions. And it’s a musical!”  She didn’t go for it. Need to work on my sales pitch for that one.

Funny part is, I always think of Fun Home as a play with songs/music, and Curious Incident… as a musical without any songs.)

I was a wee bit worried though. This award-winning play is very deserving of all its accolades. I’ve read the spectacular book, seen the incredible British production and the equally mind-blowing Broadway one last year with the Tony winning Alex Sharp as the lead, Christopher. I was also quite excited to see the new Christopher (an amazing Tyler Lea) with three people who have no idea what they were walking into. And that, for me, is fun. I love when I walk into a theatre knowing very little about what I’m about to see, especially if I have a sense that it’s supposed to be good. It doesn’t happen often but when it does, it brings out the total theatre junkie excited child in me. That gift makes me clap quietly and excitedly as the lights dim in a theatre. 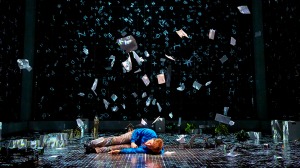 But this play is not the simplest of pleasures either. Some people that have seen the show find it too overwhelming; too much to handle. I get that, but I think that’s the spectacular part. These amazing theatre professionals (director: Marianne Elliott, playwright: Simon Stephens, scenic and costume designer: Bunny Christie, lighting designer: Paule Constable, choreographer: Frantic Assembly) have concocted a spectacular mind/body experience for us. They have created a way for us to feel what it’s like for Christopher, a young man on the spectrum of autism, to be in his world. And the world for him is very overwhelming; too busy, too loud, too hectic to function. And sitting through this production only gives us a fraction of what it’s like to be in his head, and for this experience I applause the theatre craftsmanship of this team. For me, that’s what makes amazing theatre. To have an experience, live in a theatre, unlike any other medium or form could achieve.

Seeing it for a third time is just as thrilling as the first. The lead, Tyler Lea is wonderful in the part.  He really attaches himself emotionally to us somehow while remaining true to the character and to his autistic reality.  The rest of the cast is flawless, just like they were a year ago when I saw it.  I must admit that Alex Sharp has been, and remains my favorite, but Lea should rest easy, he has lived up to the show itself.  And speaking of the show, the star is still the play itself.  Playwright Simon Stephens has written a truly breathtaking play and surrounded himself with an expert team of artists to give us this overwhelming but immensely satisfying look inside the brain of Christopher. And luckily, my sister agreed with me.  Luckily.