Three Penny Opera is Worth a Whole Lot More

The National Theatre in London was overflowing with shows I wanted to see this past July when I was on my London Theatrical Tour of 2016.  There was The Deep Blue Sea (https://www.nationaltheatre.org.uk/shows/the-deep-blue-sea) by Terence Rattigan starring the incredible Helen McCrory at the Lyttelton Theatre. There was also Sunset at the Villa Thalia (https://www.nationaltheatre.org.uk/shows/sunset-at-the-villa-thalia) by Alexi Kaye Campbell starring Elizabeth McGovern at the wonderful Dorfman Theatre.

Sadly we were unable to see these two plays. But the one show that did fit our schedule was the spectacular 3 Penny Opera by Bertolt Brecht (book and lyrics) and Kurt Weill (score) in collaboration with Elisabeth Hauptmann (who wrote the German translation of John Gay’s The Beggar’s Opera).  And I will say that this Three Penny Opera is worth a whole lot more.

Director Rufus Norris and his designer, Vicki Mortimer, have created an epic spectacular in the expansive Olivier Theatre, the main stage of the National. It had the intricate theatricality of a Les Miserables mixed with the staginess of an old English vaudeville show.  The huge revolving stage, well used and lit (Paule Constable) is the arena where we bear witness to the violence and desperation of the low-lifes that this story is centered around. The overly sexualized update by the uber-talented writer, Simon Stephens (Curious Incident of the Dog in the Night-time, Heisenberg) introduces us to the sleazy old East End of London, and the criminal destitutes that inhabit it, mainly the thief, murderer, and gangster, 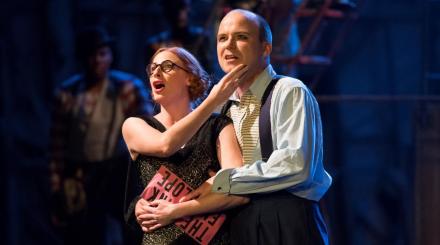 Macheath perfectly embodied by Rory Kinnear. The casting is exciting, diverse and overflowing with the unique and talented.  Norris expertly utilizes George Ikediashi for the opening number, and the cabaret star Le Gateaux Chocolat to sing and perform the show’s iconic theme, ‘Mack the Knife’ reminiscent of the old Punch and Judy puppet show but with actual humans.  Rosalie Craig as the clever and bookish Polly gives a precise and engaging performance along with the two incredible actors who play her selfish and cold calculating parents; Nick Holder’s Jonathan Jeremiah Peachum and Haydn Gwynne’s Celia Peachum, both fascinating to behold.

Craig’s duet ‘Jealousy Song’ with Debbie Kurup’s street-smart Lucy Brown is a fun high point. Also notable is the casting of Jamie Beddard, who is wheelchair-bound, has cerebral palsy, and who frequently steals the show with his delivery of insults and vulgarities, never missing the chance for a laugh.

The masterful 8 piece band fills this huge theatre with the devilish fun sounds of Weill, to full effect thanks to the Music Director, David Shrubsole.  The songs are a delight performed in the grimy cartoonish set with all of its stagey fun and debaucherry.  It is an expensive production signifying poverty, desperation, and inequality.  It is fun and masterfully done.  A joyously demented musical at the wonderful and monumental National Theatre, and I hope that it can make the leap over the pond, and possibly settle down on Broadway.  I had a vision of this show rising up in the Roundabout’s Studio 54 theatre. That theatre, with its decadent history, would make a decadent home for this decadent show. 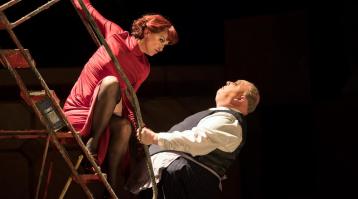 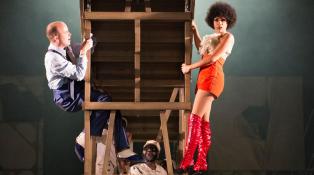