Hand to God: Not Your Mother’s Puppet Show 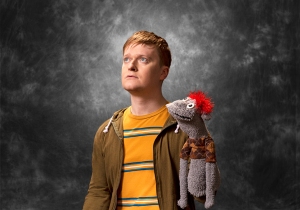 Use the word puppets and Broadway in the same sentence and the immediate reaction is, we’ve seen this before. I assure you—you haven’t.

Hand to God follows the horrific, heart-shattering and always hilarious plight of one broken family mired in grief, and its attempt to piece itself back together—with puppets for Jesus, no less. Except the puppet ministry goes terribly awry when Jason’s sock Tyrone (both played by the incomparable Steven Boyer) turns out to be of the Satanic variety, flinging open the gates of hell.

With a premise like this, Hand to God could easily fall into the trap of sitcom schtick. Not here. We get lots of foul language, a dose of self-inflicted violence, and even sex (the puppet kind). Mixed with non-stop hilarity, we also get a tender budding relationship, a sleazy pastor overstepping his ecclesiastical bounds, and a sad lonely mother (Geneva Carr) with nowhere to turn.

Conceived by debut playwright Robert Askin, Hand to God is so utterly disturbing as it functions on the level of metaphor—we know we’re not simply watching a boy and his demonic hand puppet (in fact, we’re never quite sure whether we’re watching a puppet possession or an intense bout of grief-triggered madness). On some level, we’re watching ourselves. Not convinced? Consider this: We are all on a daily basis bombarded by the urges of our lowest impulses. But for most of us, we’re able to make it to bedtime without succumbing to that fit of rage on the subway, the ten expletives strung together and hurled at our boyfriend, or that unthinkable violent act. In other words: We all have demons, but none of us are wearing them on our hand as a talking sock puppet.

What about this poor grieving mother and wife Margery, who’s pushing her hand puppet ministry as a form of help? Whatever happened to healer heal thyself? Her own medicine isn’t working for her, so much so that she runs into the arms of her son’s handsome teenage bully (an ever-sulking Michael Oberholtzer) in her desperate need for affection and consolation. The lone voice of reason on the stage is teenaged Jessica (the adorable Sarah Stiles) as she awkwardly builds a relationship with Jason and attempts to talk some sense into the deluded Margery.

As if to highlight the playwright’s view on the shortcomings of religion, our broken characters are taking refuge in a church basement, in the company of a lousy pastor wielding antiquated tools (he picks his Bible from the bookshelf on his way to confront the demon puppet). Even in this safe haven, though, there’s no respite to be had from the grief, loss and violence inflicting their lives. That’s what makes the mother’s closing line so devastating. Sitting on the floor of the church basement, holding her bloodied son, she says, “Let’s go get us some help.”

Buy a ticket. This show needs more than just our prayers.