A win for the sisters, and a loss for the gay best friend. 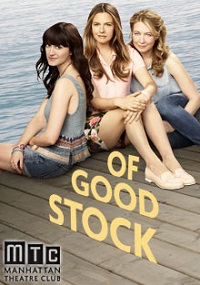 MTC’s Of Good Stock, playing over at NY City Center Stage 1, is tackling the big issues of the day within a family of sisters and their significant others: death, grief, jealousy, sickness, a surprise, and an upcoming wedding in Tahiti. The three sisters couldn’t be more different, and that could be said of the men in their lives as well. They battle it out over the eldest sister’s birthday celebratory weekend in the familial home on the Cape, comically, but also with some deeper emotional reality thrown in to keep it grounded and true. The cast is wonderful, Kelly AuCoin, Greg Keller, Heather Lind, Nate Miller, Jennifer Mudge, all delicious, but I’m going to single out Alicia Silverstone, who brings surprising depth to a narcissistic hysteric. She’s hilarious but also manages to give us the most truly emotional moment of the play. I’m trying not to give anything away…
I can’t say that the play, written by Melissa Ross and directed by Lynne Meadow, completely captivated me or even moved me significantly.  I loved each and everyone’s story, and thought they played out the details and emotional realities of the moments with finesse and with great fun and humor, but in the end, it just didn’t gel all together. Something was missing.  Overall, I enjoyed my evening with these messed up sisters and their significant others. I didn’t necessarily like them (which is perfectly fine with me), but I found myself caring for them throughout.

And speaking of significant others, Roundabout is giving us a gay-centric play, Significant Others, about a young gay man, Jason, his inability to find love, and his reactions to his three girlfriends as they, one by one, throw their bachelorette parties and celebrate their weddings with their friends. These three female friends couldn’t be more different, and well, the same could be said of the men in their lives as well, if we ever really had a chance to get to know them beyond their one dimensional presentations.  But they are not the point.  This is Jason’s story, and it is told by a wonderfully quirky goofy performance by Gideon Glick.
At the intermission, I felt this was a cute whimsical little comical play by Joshua Harmon that maybe was taking a wee bit too long to tell. It seemed like the director, Trip Cullman, thought we really would care about these people, giving them overly long moments for us to watch them listen to music at their weddings. He thought our heart strings would be pulled and we would be moved and connect with them. But as act one became act two, and the battle intensified in Jason’s frustration and desperation, my attitude shifted. I did understand and connect with the emotional truth the playwright was exploring. I’ve felt the same pangs of living a gay man’s life in contrast to a straight woman’s life. So it’s not difficult for me to empathize. It’s hard to say what happened for me, but this quirky oddball performance started to seem demented and delusional. Why is he railing at his friends because they found love and he can’t? This seemed selfish and very unloving. Where were his circle of gay friends? Why was the only gay male ‘friend’ used as a comic fool and stereotype?  Maybe the fantasy driven scenarios that are presented to us concerning his views of love started to seem like signs of a larger psychological problem, and not whimsy and bad luck. This wasn’t the cute play we were sold in the first act, but a darker story of a gay man’s inability to connect realistically beyond the superficial, yet the director continued to present us with a light quirky comedy. And it didn’t work for me, it annoyed me by the end.
Comedy about disfunction within our family or love relationships is a high wire act. The balance is what makes it work. Of Good Stock succeeds, Significant Others fails in my mind. But maybe, being a psychotherapist in my real non-blog life, I just wanted to hand Jason my card, and say “please get some help, this isn’t so funny.”