“I Surrender” to the School of Rock

“I Surrender” to the School of Rock

As Act one is coming to a close in Andrew Lloyd Webber’s School of Rock, a judge of a rock talent show cries out, “I surrender”.  A young girl is holding his hand, and gazing up at him so innocently and ever so sweetly.  Asking for him to bend the rules just a wee bit, so they could audition for him. It’s a full on manipulative moment. And I could have uttered the exact same thing. 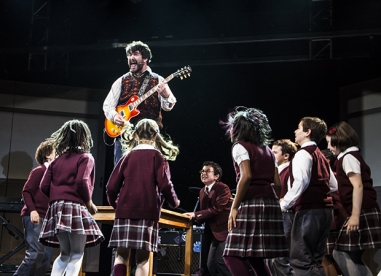 To be honest, I was not my normal optimistic self when we got tickets for Sir Webber’s new musical, his return to the Broadway and the Winter Garden, the home to Cats from 1982 to 2000 after 7,485 performances.  He hasn’t really delivered on a new musical in a long long time, at least not in the same successful manner as Phantom of the Opera or Evita, and I guess I had a hard time imagining that a musical based on a 2003 Jack Black movie would be the golden ticket. That said, I can’t say that this is the one that will restore him to the King of Broadway, nor do I believe that it will even come close to running even half the number of performances, but I will say that this show delivers a high decibel of fun and is overflowing with some major talent. It’s not a platinum success, maybe just a silver ‘Starlight‘ one. 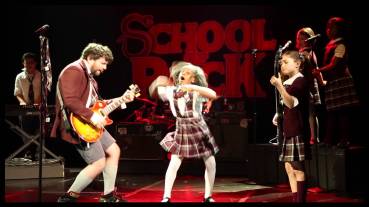 Blisteringly loud and infectious, School of Rock (music by Andrew Lloyd Webber, lyrics by Glenn Slater, book by Downtown Abbey creator, Julian Fellowes) is a rocking fun musical that does slap a smile on your face whether you want one or not. The kids are amazing. Uber-gifted. That goes without saying. Director Laurence Conner has found himself one super talented group of young adorable kids to rock us into submission. It would be difficult to single out one or more for praise.  All are praise-worthy.  Bobbi MacKenzie sings an incredible rendition of “Amazing Grace” as the shy Tomika, Brandon Niederauer (Zach) is a brilliant lead guitarist, and I couldn’t take my eyes of the incredible bass guitarist, Evie Dolan as Katie, with her rockstar posture and head-bouncing attitude while playing the hell out of that guitar.  And the others shine just as brightly.

I would also say that the other big (and thunderous) reasons for that smile comes in the form of Alex Brightman, the super talented rock-singing stage actor, who plays the lead, Dewey Finn, a very juvenile loser, but the kind of loser you have a very hard time to hate.  From the moment this show begins, this guy is singing and jumping and moving around that stage, unlike the lazy hung-over no-good Dewey (some fun, straight-forward, bouncy choreography by JoAnn M. Hunter). He definitely can rock out like no other, and sing like the kind of rock star Dewey dreams of being.  This actor gives us high energy at every moment. He is a fireball, giving us a constant barrage of rock anthem singing, but his bigger talent comes in the way he is able to balance the very difficult task of being a loser, a liar, a trouble-maker, and being loved by us in-spite of all that and more.

After being thrown out of the rock band he formed, (the hilarious and perfect No Vacancy), Dewey impersonates his substitute teacher room-mate and best friend, Ned (a hilarious Spencer Moses) to make some quick cash at a prestigious prep school. But once he lies his way past the principle (a wonderful but slightly underused Sierra Boggess) and tries with all his might to ignore the fifth grader over-achievering students in his classroom, telling them it’s recess all week, he discovers, much to his surprise, these kids possess some serious musical talent.  He decides, pretty casually I’ll say, without much thought of what harm may come of this idea, to harness that talent and form a kid rock band in hopes they can win him the Battle of the Bands. 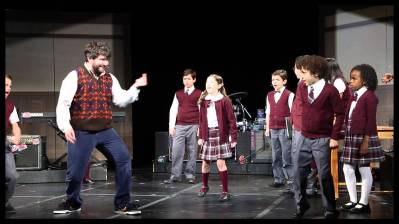 And here is where the judge steps in.  The Battle of the Bands rock judge is powerless against all this cuteness thrown at him. He is manipulated and coerced by Dewey’s lies (he tells them these kids have a rare and fatal blood disease and that this moment is their last chance to harness their dream of playing in this contest) and as the sweet acting Summer (a spot -on Isabella Russo) takes the judges hand and pleads with every molecule of her being, he caves.  As we all do to the charms of this cast and their high voltage talent.  These kids ROCK.  And so does Dewey!