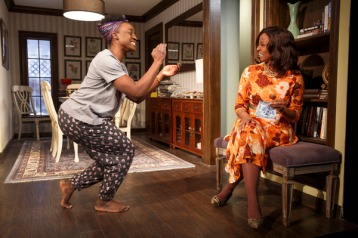 The more I think about Familiar, playing now at Playwrights Horizons, the more amazed I am of its depth, ambition, and  intelligence.  Directed impeccably by Rebecca Taichman, the second Danai Gurira play I have seen this month is every inch and every minute as good as Eclipsed on Broadway. This provocative family drama takes place as the eldest daughter of a very successful Zimbabwe immigrant couple is about to be married to a compassionate white man, and the family is gathering together for the rehearsal dinner. As with many a family drama (see: The Humans), any time a family assembles together for a big event, secrets and lies are spilt, truths are told, and generations and cultures clash.  But what Gurira does here is expands the traditional formula into something more ground-breaking, weaving in immigrations, culture, language, and assimilation, layered with a deep emotional and authentic impact. 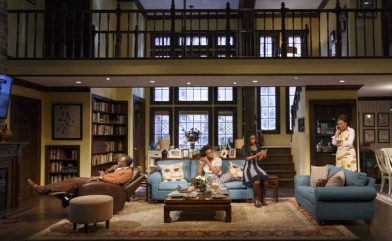 The whole cast shines majestically as this clan gathers together in the beautifully designed suburban living room (Scenic Design: Clint Ramos) of Donald (Harold Surratt) and Marvelous (Tamara Tunie) welcoming their youngest daughter, Nyasha (Ito Aghayere) home from New York (and a recent trip to their homeland of Zimbabwe) for their eldest daughter, Tendi’s (Roslyn Ruff) wedding.  Also in attendance is their aunt, Margaret (a wonderful and deeply engaging Melanie Nicholls-King), who tries to soften the inter-family dynamics, but also helps usher in a few others.  One of the most powerful and disruptive is the arrival of another aunt, Anne (Myra Lucretia Taylor) direct from Zimbabwe.  She brings 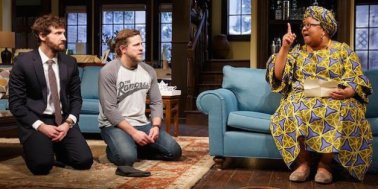 with her so much more then just her baggage (in all aspects of that word), she brings culture, tradition, history, family turmoil, and most of all, her memories of the past that Marvelous desperately wanted to leave behind. Thrown into the mix is the sweet natured groom, Chris (Joby Earle) who runs a foundation focusing on helping in Africa, and his adorable goof of a brother, ex-soldier Brad (a spectacularly perfect Joe Tippett- total scene stealer in the best of possible ways), and what we have now, is a culture/generational/family clash waiting to explode.  And explode it does, ever so beautifully and with such genuine authenticity. 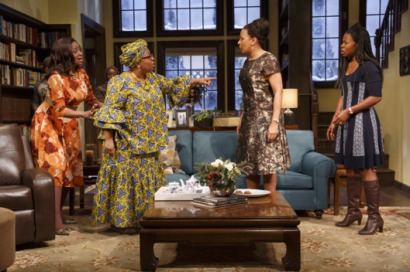 To say more, would not do justice to the play nor the performances, but suffice to say, I was enthralled from beginning to end, shedding a few tears as the play nears the end.  I thought long about this play and what initially felt like the very different Eclipsed, and the more I contemplated and compared the two, the more I got a sense of the family within both, and the epic struggle for adapting and maintaining both place, person, culture, language, body, and soul. Both are filled with such need for family and for connection within and in the greater context of culture and homeland.  These creative and intense stories need to be told, 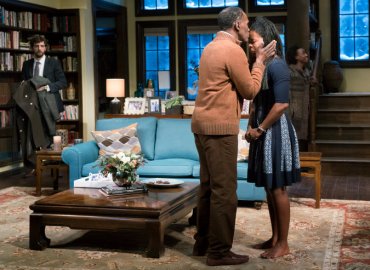 especially by a writer with the soul, the voice, and the intelligence of Gurira. In some ways, I connected more to this play as to the other Gurira play.  Eclipsed I felt one step removed throughout, while Familiar was about the immediate family, and as it has been said here and elsewhere, we all have them, and within that construct, we can all relate.  I saw parts of my parents in Donald and Marvelous, and parts of myself in both siblings.  This family is Familiar, extraordinarily so, most likely to all that allow them into their lives. 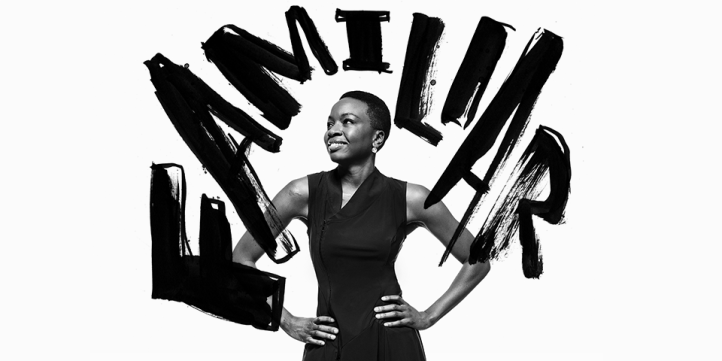