Sunday in the Park with George: Thursday at the Hudson with Jake

Sunday in the Park with George: Thursday at the Hudson with Jake

It’s hard to fathom but this Sondheim masterpiece has only gotten better. I saw Sunday in the Park with George when it briefly played at the New York City Center Encores! Gala celebration last October. Now it has shifted and refined itself for a Broadway run at the Hudson Theatre (but I hear it’s not submitting itself up for Tony Award consideration – shame).  I must say, that with that extra time and energy that have been invested into it, the musical has gotten more beautiful and much stronger overall. It looks better, sounds better, and is definitely performed better than ever by its stellar cast. This is as I had hoped. I had written in my review of the Encores! production (click here for the review) that Jake and Annaleigh were just plain spectacular, surprisingly so.  I hadn’t expected them to be so fantastic, and in my review I had said, “what would these two be like in a fully staged production, with a real rehearsal schedule? I can only guess that it would be sublime.” And I was right. And it is.

As I had stated previously, the production of Sunday in the Park with George that I saw in London’s West End and at the Roundabout Studio 54 Theatre back in 2008 starring a radiate Jenna Russell and a strong Daniel Evans is the quintessential production in my opinion (check out this video here).  Visually perfect and vocally stupendous, all future productions will forever be compared to this masterful revival (although Mandy Patinkin might be my all time favorite George).  It will always be very difficult to top that spectacular production (much better than the Peters/Patinkin Broadway original in style and substance that I saw in 1985 – back before I even knew about Sondheim: check out this video here), but this new production, lovingly directed by Sarna Lapine (musical staging: Ann Yee), doesn’t disappoint in the slightest. It cannot erase the 2008 revival completely but in certain areas, the greatness is challenged.

First and foremost, Jake Gyllenhaal is spectacular in the role. Once again, he is devastatingly good right from the beginning. His last go at it at Encores! had the disadvantage of the shortest possible rehearsal schedule one can imagine, and even with that going against him, his performance of this challenging role was impressive.  Now, with more rehearsal and a tighter enhanced production, he has only grown more into the dense complicated role of George. Sometimes the depth of character and tone in his voice actually reminds me of Patinkin as he carries a similar richness. His precision is never more apparent than during the complex song, ‘Putting it Together’. It’s the most demanding song of the show, and he attacks it with vigor. Also, his ‘Finishing the Hat‘ is one of the most heartfelt and layered performances I have heard of that incredibly emotional song. His George has more play and gentleness than any of the other Georges I have seen, while still maintaining the tortured focused artist. It is a tremendous feat he has accomplished here, rivaling his predecessors valiantly, and sometimes even besting them.

Ashford, just like in the fall, still took a bit more convincing. I still struggled a bit with her too modern and American tone, but at moments it felt more appropriate for the part than either Bernadette Peters or Russell. Ashford’s Dot is a struggling survivor, not like the well-heeled women that surround her.  This is especially apparent in the fantastically funny and touching scene between her and the very polished Yvonne (a very smart and detailed portrayal by Erin Davie), the wife of a very different but more successful artist, Jules (a solid Robert Sean Leonard). Dot shouldn’t seem as eloquent or as poised, and she isn’t, although her strength of character is luminescent.

As she wound her way through her first number, ‘Sunday in the Park with George’, I was taken by her. She is a lot more comfortable and playful in the role of Dot, and we totally fall for her in the way that she brings lightness to George. I do prefer the more gentle sound of Russell’s voice over Ashford’s more angular and sometimes angrier take on the role, but her portrayal is heartfelt and ever so vibrant.  There is something deep and raw about Ashford in this part; her resilience balanced with her distress and sense of loss, and she delivers strongly on all counts. She wants George to choose her over his art, but she also knows he can’t, and won’t. Ultimately, she understands that his focus and determination is what she loves about him. She is harsh with him while still deeply and forever wanting him to (k)need her.  Her hurt and disappointment destroys me.  When she looks for him in the park, and when she comes to the studio to ask for the painting, I am with her completely. Feeling her desperation with every note sung. I especially loved ‘Color and Light’ this time around, more so than last October.  It seems the two of them have sunk in to their roles completely.

In Act 2, Marie, modern George’s grandmother and Seurat’s daughter, Ashford is connected and hysterical.  Delivering each and every line with authenticity and devilish humor.  Her scene in front of the ‘family portrait’ with the lovely and sad, ‘Children and Art‘ kills me.  I’m not sure what it is about Marie and Dot, but both characters throughout this magnificent show have the ability to make me tear up, and Ashford succeeds in making me weep.  Maybe not as intensely as Russell did, but Ashford does not disappoint either.

The other thing that didn’t disappoint, which I will say is the first time I will be saying this about any production of Sunday in the Park with George, is that finally that art installation is visual inspiring.  Every other production has failed miserably making us believe that George’s modern light sculpture is something powerful and unique. Captivating enough for museums and art galleries to be fawning over him.  This revival creates a ‘Chromolume #7’ that actually equals what is being said about it, or at least, coming the closest I’ve ever seen to being something spectacular (lighting: Ken Billington). The set is still simple, as it was at City Center but larger, and this time around it doesn’t felt cramped, and the projections took a beautifully performed musical and make it lovely and inspiring to gaze upon as well (scenic design: Beowulf Boritt; projections; Tal Yarden/Christopher Ash).  The costumes went from serviceable at Encores! to gorgeous here (costumes: Clint Ramos) at the new Hudson Theatre (a beautiful new addition to Broadway). The orchestra is still visible in the back, generally hidden slightly behind a curtain of gauze, seen just enough to be satisfying but not distracting like it is in Sunset Boulevard. And it sounds just glorious (music co-ordinator; Seymour Red Press; orchestrations: Michael Starobin; music director: Chris Fenwick).

The rest of the cast is also creating something spectacular. Standouts for me include the delicious duo of Ruthie Ann Miles and David Turner as Frieda/Betty and Franz/Dennis, and the always reliable Brooks Ashmanskas and Liz McCartney as the hysterical Mr./Charles and Mrs./Harriet. Replacing the majestic Phylicia Rashad in the dual roles of the Old Lady (Seurat’s mother) and Blair Daniels, the art critic, Penny Fuller excelled in both parts. Rashad was wonderful in the Encores! production, but this time, the mother’s song, ‘Beautiful’ is restored in my memory as an equal to the devastating song that precedes it, ‘We Do Not Belong Together’. Both so beautiful and sad, glorious and gush worthy.

In the end though, it really comes down to the final song, ‘Move On‘.  And as these two musical stars showed us in ‘Color and Light’ and ‘We Do Not Belong Together’ they do in fact belong together on that stage.  They both have given us quite the gift, bringing back this masterpiece to Broadway in such beautiful order, design, composition, form, symmetry, tension, balance, light, and most importantly of all, harmony. 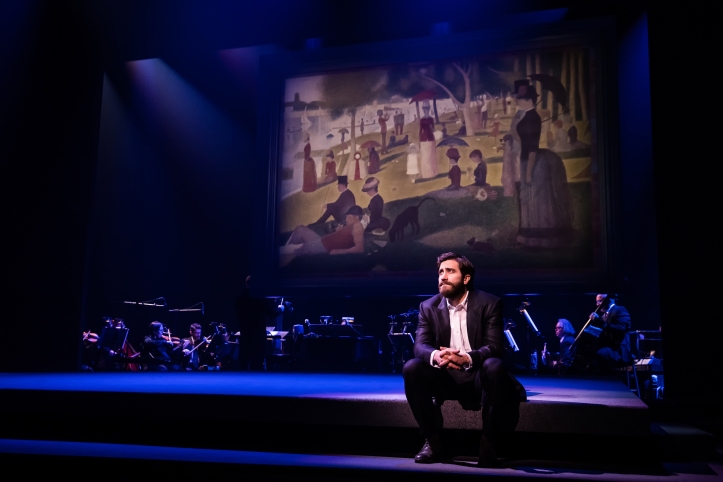 So I’m going to repeat myself here, so forgive me. I am going to once again ask for your indulgence. Sunday in the Park with George besides being a masterpiece by Stephen Sondheim (Music and Lyrics) and James Lapine (Book) is just simply one of my all time favorite shows with numerous very special memories attached. This is the sixth time I have seen the show and it literally makes me weep each and every time, and in both acts. I’m not quite sure why it triggers such a response in my emotional core, but it appears that I only need to hear the initial chords of a few particular songs for the tears to begin. Many car drives by myself listening to the cd will attest to that. One of my strongest memories was a night in 2006, when I saw Russell playing the role of Dot in the West End production. I had just arrived that day into London, and maybe it was the jet-lag but the tears started flowing in Act 1, and only intensified in Act 2. So much so, that the sweet Bostonian lady sitting beside me started to maternally stroke my arm in an attempt to settle me down a bit. Bless her and bless this show.