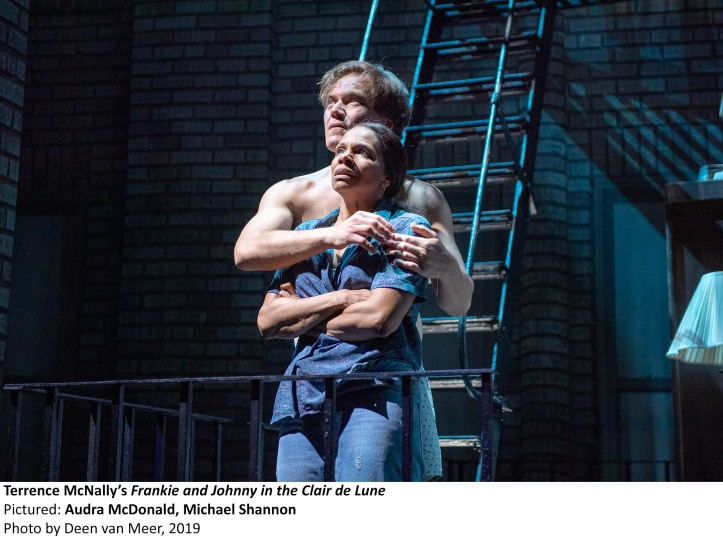 The Review: Frankie and Johnny in the Clair de Lune on Broadway

Now that the Tony Award festivities have finally passed us by, the Broadway lights feel a bit dimmer and less exciting, that is unless you are looking up at the Broadhurst Theatre’s marquee for Terrence McNally’s Frankie and Johnny in the Clair de Lune currently getting a pretty raw and restlessly good treatment by director Arin Arbus (TFANA’s The Winter’s Tale). The two leading ‘love birds’ square off in this classic play, face to face before diving in and shedding all of their superfluous armor in an intense coming together that is, simply, a fucking great start to this engagement. It’s clear once that first scene has come to its natural climax, that the two, dynamically played with a clarity for realistic pain and discomfort by the gloriously heart-breaking Audra McDonald (Broadway’s Lady Day…, Shuffle Along…) and the phenomenally determined Michael Shannon (Broadway’s Long Day’s Journey…), are on a difficult journey forward. 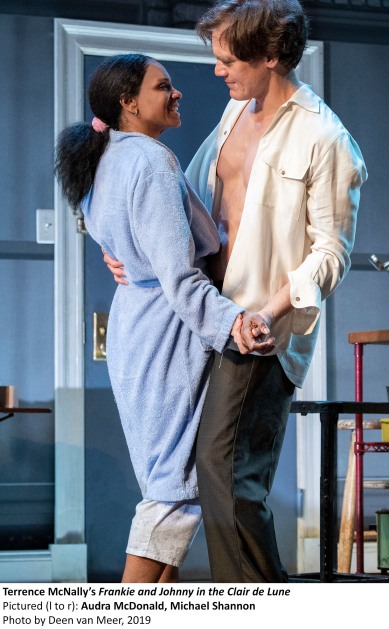 Both are deliciously nervous and decidedly tense in her nakedness, stemming from their complex past and in that uncomfortable present.  McDonald’s Frankie retreats into her discomfort of the afterglow with an urgency. Her nakedness all of a sudden feels too intimate and real, and her demeanor suggests a need to disconnect and retreat. It’s a terribly sad but authentic stance, one that is becoming all the more prevalent in our disconnected society, but Shannon’s Johnny has made a different, but equally difficult decision. He has decided not to do that same thing. To stand strong, even when his own sense of solidness is repeatedly ruptured and poked, as the bruises almost become visual in the first moments of Act 2. It is here, within that conflict that the soul of this standoff thrashes about. If this play had been set in current time frames and with a different edge, Johnny’s behavior would reverberate as a frighteningly aggressive stance, teetering on the edge of panic, and even here, set in the harsher and somewhat sexually more wild days of 80’s Hell’s Kitchen, the electricity borders on dangerous. But somewhere in Shannon’s delicate portrayal, we sit with ease, knowing in our heart that his defiance is based on the desire to find love, not submission or power; attachment, not domination.

First performed off-Broadway in 1987, the play captivated the energy and a dilemma unfolding in the sexual revolution of that timeframe. The two lonely, middle aged characters were beautifully and iconically portrayed by F. Murray Abraham and the always powerful Kathy Bates. Had this play been written in our current world, for one it would be a 100 minutes long one act play, but luckily for us, McNally (Love! Valour! Compassion!), following the conventions and the mood of the world around him, took his time focusing our eyes on these two whose first date ends with an abandonment and a dive into animal attraction. The serious games of love and companionship are then forcibly played out at Johnny’s insistence in her one-room walk-up apartment in the west side of New York City.

The space registers the aloneness of single life in NYC, with windows into other existences shaded, but looking down on them from all angles. Detailed but abstractly designed by Riccardo Hernández (Broadway’s Indecent), with solid and effective lighting by Natasha Katz (Broadway’s The Prom), concise sound design by Nevin Steinberg (Broadway’s Hadestown), and strong costuming by Emily Rebholz (Broadway’s Dear Evan Hansen), Johnny’s short order cook tries his hardest against all obstacles to breach the emotional gap that has been constructed between them. It’s delicate and intense, showing the cracks in his and her determination for and against the fearful future. Frankie, the waitress, is said to be emotionally defined by her unattractiveness, but with McDonald’s portrayal, the actor’s beauty is shielded by her own insecurities and fears, creating a woman just as cautious and frightened as the next. It’s a detailed and subtlety deep dissection of this woman who Johnny has decided, quite irrationally, is his soul mate. His belief is epic in its groundless hopefulness while not letting him seep into savior knighthood.  There is trouble underneath his determination, but there is also a courageousness in his assurance that is trepidatiously thrilling and engaging. Slowly the two scared lovers begin to open up, feeding their hunger with comfort and personal history, and slowly finding a pathway to reveal parts of themselves so they take those tentative steps towards something they both are equally frightened of, but hopeful in.

Johnny, in a moment of utter romantic desperation to fend off the walls being built, calls a radio station to request the most beautiful music ever written. He is hoping against all odds that this act might shift or pause the construction and find an alternative direction towards something more united. Claude Debussy’s “Clair de lune” is the gift they are given. It floats into the night air buoyant with love and fearlessness for us all to embrace. He beckons Frankie to join him in the moonlight, finding their particular “Clair de lune” in its delicate shine. We join them in the wondrous moment, achingly wanting to believe that this push towards vulnerability and openness will succeed, and these two will find some sort of happiness in their companioned future. One can wish upon that star, even when looking up at the sky in the bright, crowded, loud, and sadly, detached city of New York. 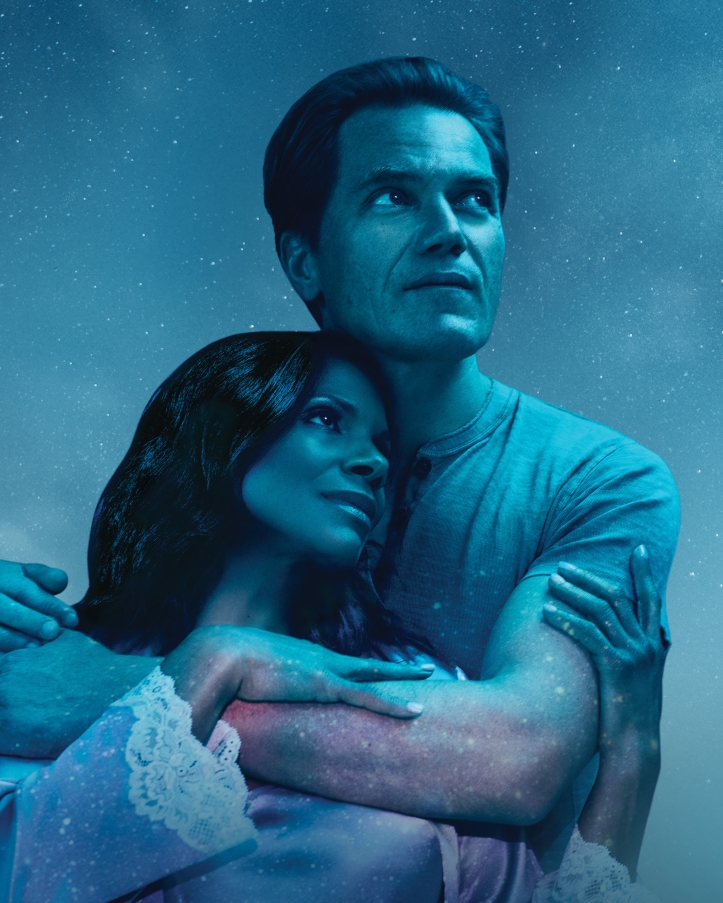