The space is astonishing. Expansive, just like the Park Avenue Armory, but with the added technology and contraptions that will elevate any creative mind into something magically undiscovered and inspiring. That’s a truth that must be said. The Shed’s McCourt Theater is as perfect a space for this sort of theatrical endeavor, one where the sky is literally the limit. The height and depth invigorates unbelievably, giving almost endless panoramas and a broad canvas to paint an experience that is only restricted by ones imagination and expertise. Dragon Spring Phoenix Rise, the kung fu musical conceived and directed by Chen Shi-Zheng and commissioned for The Shed’s opening season, tackles the air space with determination. Co-conceived by “Kung Fu Panda” screenwriters Jonathan Aibel and Glenn Berger, the story is almost Shakespearean in texture and construction, and although you can feel their steadfast belief in its wildly spectacular importance, the entertainment portion falters in its stilted dialogue and lackluster presentation, reducing what could have been awe-inspiring to chuckles of uncomfortable laughter for its juvenile clumsiness.

As the rock and scaffolding landscape is unveiled, the overly simplistic mythology unfolds with a determination for grandness. As directed by Chen Shi-Zheng, Dragon Spring Phoenix Rise stumbles forward aerobically, stalling the momentum with arrangements of compelling songs by Sia (with additional remixes by composer, musician, and producer Arca), messy and inarticulate movement choreography by Akram Khan, and campy wooden vocal and line reading performances by its tenacious cast. Ultimately, the saving moments of grace come from the martial arts choreography by Zhang Jun which is co-currently well orchestrated but never fully rises up to the same level as the video promos suggest. Some of the visual aerial creations are beautiful and thrilling to register, giving us singular moments of ocular joy as warriors float down and up like fallen angels in a majestic aquarium. I just wish the creators had taken this element, a dynamic that fits so well in The Shed‘s towering space, and expanded the aerial gymnastics with more creative fluidity and graceful motion. This is especially true during the musical numbers which lacked any visual appeal and connectability. You get the sense that the creators had such a strong belief in the power of these songs that nothing else was needed, but they are sadly misguided. If these song moments could have embraced a Cirque du Soleil feel and balletic sense of wonder, the vocals and lyrics might have brought our heart into play, but as it stands, Dragon Spring Phoenix Rise grinds to a halt far too often.

The principal performers do their strident best to bring intensity to the battle, but most line readings feel too much like canned sound, rather than authentic interactions.  PeiJu Chien-Pott (Lotus), a principal dancer for Martha Graham Dance Company, and David Patrick Kelly (Lone Peak), a veteran actor of stage and screen who is best known for his role as Luther in “The Warriors“, get lost in the wasteland of poor writing. The other featured performers, Dickson Mbi (Lee), David Torok (Doug Pince), and Jasmine Chiu (Young Little Lotus/Little Phoenix) and Ji Tuo (Little Dragon) as the destined twins, do the task in front of them when in battle, but seem awkward in the clumsy modern day settings of the ridiculously staged nightclub scenes, where an ensemble of twelve highly trained contemporary, modern, hip hop, and street dancers flail around like annoying club kids. Each and every one of the cast members need a stronger guiding hand, both in word and movement, to find that secret of mortality outside of the kung fu-mode, that could turn all those silly erratic moments of real life into something that might resemble magic.

With an original score by composer, musician, and producer Bobby Krlic (The Haxan Cloak), the wonder in this Dragon Spring lies within the original production design concept by Tim Yip. Kudos go to the technical design team made up of video designer Leigh Sachwitz, lighting designer Tobias Rylander, sound designer Brandon Wolcott, and special effects designer Jeremy Chernick. Their work here is what paints the overall picture so gorgeously with aquatic grace and power. The detailed lighting refracts off the fluttering ribbon clouds like bubbles in champagne, and etches the ripples of water with mystic sensibilities. Within the team’s eclectic vision, the art of the Phoenix resides. The rest is a muddle, from the grandness of the underutilized scaffold walkway down to the overused repetitive slide-down the ladder handrails. The stilted dialogue incited groans and snickers from the spectators around me, making it clear that the folly wasn’t fully formed. It’s such a shame, that Dragon Spring Phoenix Rise never was given the chance to live up to the promise of what could have been. Maybe the next commission will float up to the heavens inside that spectacular space, and give us a piece of performance art that will define its worth. 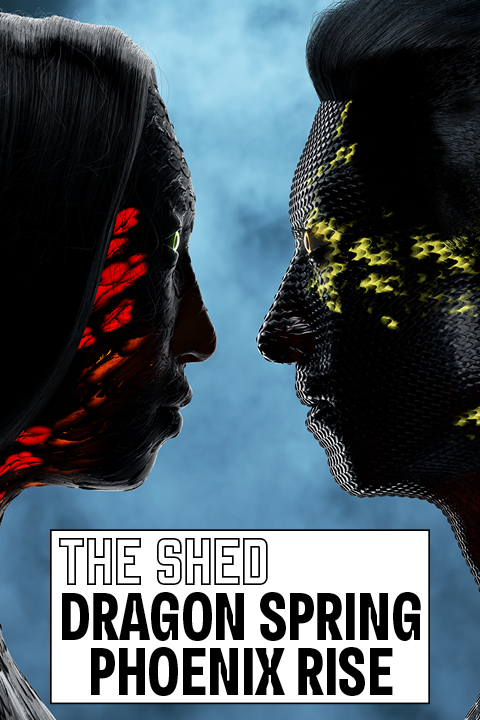