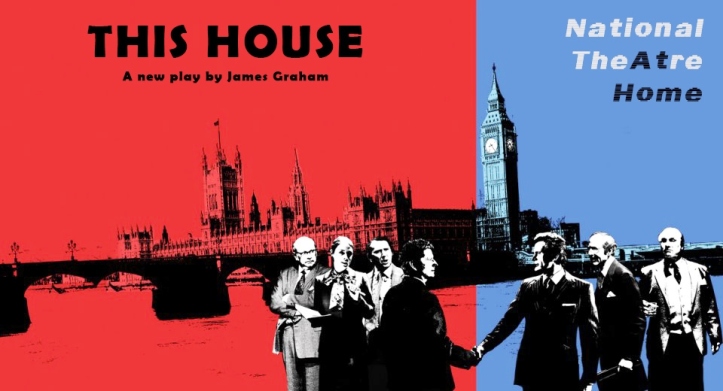 They all file in down the middle walkway, walking tall and proud. The rock music plays loud and vibrant, befitting an international spy thriller, not necessarily a political history book lesson that is being staged quite excitedly before our very eyes. It’s a pretty delicious layering, one that would never be expected when reading about the National Theatre‘s new play, This House, from playwright James Graham. It’s party politics and history but done with such dimension and energy that the edifying you feel delivered is so delicious that one never has a chance to wander too far off the road. It ricochets magnificently from left to right inside the political aisles of the Palace of Westminster, where no one, we are told, ever dies. Well not exactly. These MP’s try hard to never let that happen to anyone, but one or two do get killed off politically from time to time, with some rebounding with disconcerting ease. All and all, it’s a magnificently flawed political system that is enacted and acted out with a grand grace and determination, dancing hypnotically through the period of British parlimentary sessions starting with the general election called in February 1974 to the vote of no confidence in the government of James Callaghan that took place in 1979. The British battle for control squares off in the offices of the Labour and Conservative Chief Whips, fascinatingly constructedy by designer Rae Smith, with spectacularly specific lighting by Paul Anderson, but with the party leaders, such as Ted Heath, Harold Wilson, James Callaghan, Jeremy Thorpe and Margaret Thatcher never actually making an appearance on the main stage.

Playing wildly with dance and aggressive maneuvering, courtesy of the fine work of choreographer Scott Ambler, the national lampooning of the mechanism of government in the time immediately before Thatcher, focuses on the testy but somewhat civil relationships between the two offices of the whips, their backbenchers, and the members of the other minor parties that have a lot more power then they rightfully should have. Without ever falling into the ridiculousness of the wild fun ride, the play finds power in the manipulations and intensities of tight races. Written with an expert eye for feisty drama and fun by Graham, the play is a masterpiece of interwoven intellectual details, spruced up with dynamic structures and out-of-this-genre-defining music, beautifully created by Stephen Warbeck. It reminded me, as I watched with glee, of the equally provocative and inventive Ink that I was lucky enough to see last season at MTC on Broadway that, as it turns out, he also wrote. They both carry the same flair for history and playfulness, wrapped up in genuinely smart witty interactions laced with serious didactics. This House, his first major play, was commissioned most wisely by the Royal National Theatre, where it garnered critical and commercial success. It then transferred most rightly to the larger Olivier Theatre, where it was nominated for a Best New Play Olivier Award and recorded luckily for us in 2013 by NTLive.

Deriving its name from the House of Commons, Graham’s blisteringly smart and insightful 2012 play is grounded in wildly real events, which I must admit I was completely oblivious to. British political history is not my winning suit, but with This House I wa given a most prized bird’s eye view into the antics and manipulations that happen behind opposing party closed doors. This House flies brilliantly above all, pulling me in even without the history behind me. It finds power deep inside the fictionalized machinery of politics during those turbulent few years of British political history when maintaining of power took precedence over all, including governing with good conscience. I guess that’s not a position anyone would be surprised by today, given the state of orange-monstered American politics, but this well-crafted slice of solidly smart theatre brings into focus the meticulous workings of a hung British parliament where the players have a bit more faith in tradition and honor than anything happening in the U.S. Senate these sad dismal days.

The play is a sharply devised piece of theatrics, well-staged by director Jeremy Herrin (St. Ann’s/NT’s People, Places & Things) that is dynamically activated by the 1974 democratic dance, beginning with the rumors of an election, and the calling to order that no one really listens to in its entirety. Harold Wilson’s minority Labour government is trying their best to cling to power as this “bloody rotten” system ticks forward into the history books. Writer Graham strips the politics down to its tricky core, where the tradition of all those gentleman agreements and funny rules can’t be broken, that is until they are inside a technicality that has great ramifications on every single well-meaning (but not well-functioning) body in the palace. The underlying machinery pushes the two teams of whips directly at one another, as they constantly count the numbers and wrestle for control of the chamber. In the intricate flight pattern of the birds above, they try to keep it clear and confusing as they watch the target come closer and closer. Don’t go towards it, they say. Be patient and wait for them to come to you. Court the outlying minor parties as fiercely as a lover, and be sure to drag in the sick and wounded MPs by any means necessary, that is if you want to get the number you so desperately need.

Dressed in the suits of 1970s politics, the cast of talented pros deliver the intricate dance of deal-making with a finesse that is truly riveting, even when the historical details fly over the head of this somewhat confused Canadian. The Labour party, in the left corner, are the feisty foul-mouthed underdogs desperately trying to win their five-year bet, while across the hall are the high-end arrogant Tories, determined as ever to topple the low-brows with a vote of no confidence. Big Ben ticks the details forward, until she stops suddenly, causing a “bit of a ding dong” in the one person/one vote system that is being played out strongly in pools of light and intricate showmanship. There’s a  number of backbench rebellions and high-brow obstacles at every turn of the dial, with a gentleman’s pairing agreement being tossed aside in distrustful anger, and key players bouncing across the aisle with a complicated sense of purpose.

There is complete brilliance in the savage survivalist politics that are being portrayed here when Big Ben most symbolically grinds to a halt, much like the governing bodies present here. Lauren O’Neill dazzles as the junior whip Ann Taylor, with no apologies for swearing or intent. Helena Lymbery stands strong as a backbencher with principle up against the aggressive captivating gaggle of Whips, specifically; Labour’s Chief Bob Mellish, strongly played by Phil Daniels; Labour’s deputy chief Walter Harrison, perfectly delivered by the impressive Philip Glenister; Conservative chief Humphrey Atkins, played with upper class perfection by Julian Wadham; and the Conservative deputy chief Jack Weatherill, deliciously portrayed by Charles Edwards. Christopher Godwin also does an impressive job as the old-time loyalist who would risk his own death in support of his party. But it is the rivalry between the two deputy whips that we bet our bottom dollar on, and watch with delight as they both try to survive and win, but with honor and respect wonderfully hidden elegantly under the MP surface.

The count tally takes precedence in the delicately devious dance, as we watch them all risk everything for party prominence over policy. We never really get deep into the psychologically minds of the individuals, or the sociopolitical stance of the MP’s and their parties, but that isn’t quite the point of this Parliamentary Polka dance. It really comes down to the grueling single-minded powerplay of governance that is at stake inside the battle. Whether they can work a minority or count on a small majority, it is all up to the whips to do the nasty deed of orchestrating deals with their own and the minority party MPs. Winning the vote is what counts in the end, and Graham finds the twisted glory in the opposition and the competition, where every single vote counts. But in the end, it’s all about getting Big Ben to tick history forward once again, bringing Margaret Thatcher into power and This House, now streaming on the National Theatre‘s YouTube channel, to a wonderfully fulfilling majority-rule ending.