The All Too Fun and Energized Radiant Vermin:

The All Too Fun and Energized Radiant Vermin

It was the kind of night at the theatre that I love.  Walking into the 59E59 Street Theaters without any knowledge of what kind of play I was about to see.  I did know it was a part of the Brits Off Broadway series so I was optimistic (I’m hoping to get some tickets to the Alan Ayckbourn double feature), but the name of the play, Radiant Vermin gave me little to no clue about anything.  And the stage  design (William Reynolds) was no help either.  A blank white wall and floor.  No props or scenery to give me any ideas.  All of this just made me more excited and more curious then ever.  And I wasn’t let down. 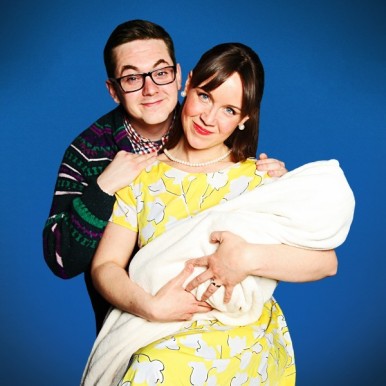 Philip Ridley’s dark comedy revolves around a young British couple, who enter onto the stage carrying a baby basket, smiling, and breaking the fourth wall immediately, inform us that they want to tell us their story.  The pair are instantly likable and engaging.  Scarlett Alice Johnson and Sean Michael Verey wonderfully and energetically play this adorable fresh faced couple, Jill and Ollie.  Jill and Ollie want to walk us through the story of how they got their first dream home,  and ask us directly, “what would we be willing to do to have our own dream home”.  They want our absolution and they are masters of keeping our sympathies and allegiance while describing some pretty dark and disturbing acts. We have become witness to and judge and jury to their desperate tale.  It’s a very engaging set-up and these two fine and talented actors, along with the absolutely wonderful Debra Baker as the government real estate agent, Miss Dee (and one other perfectly created character), take us on a delightfully funny and morally confusing ride through their adventure of becoming parents and new home owners. It’s a superbly funny abstract comedy and one I am not willing to give away anything except that the offer Miss Dee gives Ollie and Jill is a deal too good to be true, and shortly after, we all find out the gruesome costs.

Hilariously directed by David Mercatali, this telling of their morality tale is a high energy physically demanding romp where Johnson and Verey portray this loving couple plus numerous neighbors leading us up to the wildest of endings.  I was blown away with the final birthday party scene,  almost exhausted and out of breath for the actors, and in full amazement of their ability to give us the rapid fire delivery of all these characters and moments without missing a beat.  It felt like the most madcap story one could imagine.  My heart was racing when, magically, they stop and revert back to asking us directly,  “What do we value the most? Property or life?”  And then, they ask us our verdict.

My verdict was a standing ovation.

The trailer from the Soho Theatre production in London, UK: